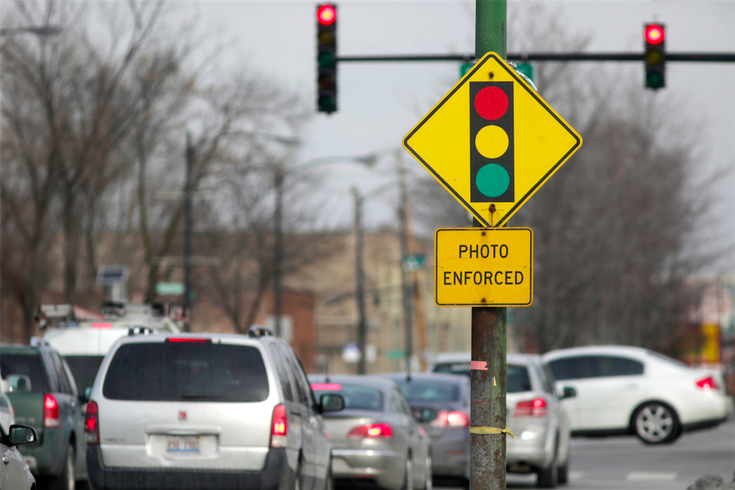 In this photo taken Tuesday, Feb. 10, 2015, a sign warns motorists of the presence of a red light camera in Chicago. The fight over red-light cameras has landed in the Illinois Legislature, where lawmakers who say the recording devices are “dishonest” and fail to make driving safer are pushing to ban them in communities across the state.

At a recent board meeting, the Philadelphia Parking Authority met to discuss three new red light cameras installed at intersections in North and South Philadelphia. Support for the cameras, which peg violators with $100 fines, came from local politicians such as Councilmembers Cindy Bass and Mark Squilla, as well as State Rep. John Taylor.

Underscoring the public safety benefits of the cameras, Bass and Taylor appeared in new PSAs sponsored by the PPA.

Despite these assertions, at least one investigator says the city of Philadelphia has been under-reporting the number of accidents that occur at intersections with red light cameras, citing evidence from City-Data.com – which uses information from PennDOT – and corroborating news reports, Watchdog.org reports.

Rick Short, who leads the group Stop Robo Cops, has undertaken investigations in New Jersey, New York and Philadelphia, releasing videos that condemn the PPA for allegedly fudging accident numbers when passing them to the Pennsylvania Department of Transportation.

Opponents of red light cameras argue that drivers shift their focus to the camera itself rather than paying attention to other motorists and pedestrians, which increases the risk of certain kinds of accidents. Drivers may also speed up brake harder to avoid getting tickets.

Resident action against the cameras in neighboring New Jersey led to the shutdown of a 5-year pilot program late in 2014. Similar curtailments have been enacted in cities across the United States.

In Philadelphia, Short specifically cites discrepancies between PPA accident records and City-Data records along Roosevelt Boulevard, a thoroughfare that has been regarded among the most dangerous in the United States. In 2011, the PPA said there were 6 deaths from accidents at intersections with red light cameras on Roosevelt Boulevard, whereas City Data counted 15. In 2012, Short counted 7 on City-Data against 1 claimed by the PPA.

For its part, the Philadelphia Parking Authority denies Short's argument about the dangers of the cameras.

“Before red light cameras, during a 90 day period when cameras were running but not issuing tickets, there were 4-5,000 violations per month,” a PPA spokesperson said. “That’s gone down dramatically to just a few hundred per month, so these intersections are clearly much safer.”

The PPA also claims Short's methods for analyzing data are flawed because PennDOT data assigns accidents to intersections when they may actually have occurred at some distance away.

Philadelphia now has 122 red light cameras spread throughout the city, which can be located using the PPA's interactive map. The new cameras just went up at 2nd and Erie in North Philadelphia, 26th and Penrose Avenue in South Philadelphia and Belmont and Parkside Avenues in Northwest Philadelphia.

As a next step in his fight against the cameras, Short hopes to gain the attention of Pennsylvania Governor Tom Wolf. If successful, he would urge a full review of red light camera data since 2005, when the state first implemented the program.