On the right track

In wake of tragic Amtrak crash, SEPTA is spending millions on repairs 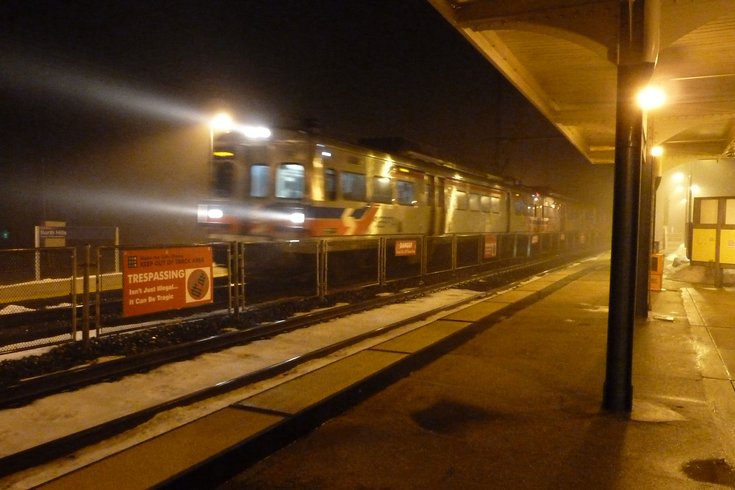 Its headlights piercing the fog, a SEPTA regional rail train pulls into the North Hills station on the Doylestown line on Wednesday night.

Two weeks after the Amtrak train derailment in the Frankford section of North Philadelphia killed eight people, injured 200 others and focused public attention on the state of the nation’s rail system, this region’s transit authority will be doing something relatively new at its monthly board meeting Thursday.

It will be spending a lot of money on repairs.

The Southeastern Pennsylvania Transit Authority (SEPTA) is scheduled to approve nearly $300 million worth of capital spending this month. And while the timing is co-incidental, it is also serendipitous. Because not too long ago, the historically cash-strapped agency would have counted itself lucky to get that much spending authorized in an entire year.

It’s all due to Act 89, the landmark 2013 law that restructured the state's gas taxes and created a permanent funding source for the transit agency. It means that Pennsylvania now has higher gas taxes, but is also in a better position than most other states, and even the federal government, when it comes to paying for transportation.

“There’s not a day goes by that one us here at SEPTA doesn’t thank our lucky stars for Act 89,” said Jeffrey Knueppel, SEPTA’s Deputy General Manager. “It came just in time. We were literally on the brink of having to close down service because some of the infrastructure would not have been safe enough.”

It’s not a co-incidence that SEPTA is one of few railroads that will meet the federal government’s deadline for installing a positive train control system designed to prevent accidents like the Amtrak derailment.

The total project will cost $328 million by the time its fully operational, at the end of this year.

While the agency once relied on the federal government to cover 60 percent of its annual budget, with 40 percent coming from state and local sources, that ratio has been flipped. The state is now the biggest funder of the system.

“We had to scrape together every last penny we had to be able to do it,” said Knueppel of getting positive train control up and running in time for the federal deadline. “Unfortunately, it did come at the expense of not addressing some of the other maintenance issues that were piling up.”

Not so Amtrak. Officials there say budget issues kept their positive train control system from being fully operational on the Amtrak train that derailed. They have also said they’ll need an extension on the 2015 deadline in order to get it fully operational.

SEPTA’s experience highlights the juggling act public transportation has to put on to balance tight finances with public safety and a crumbling infrastructure – and what can happen when legislators step up.

Like Amtrak, the national rail system, SEPTA had been living on starvation level funding for years. By 2013, the agency was in a $5 billion hole - $3 billion in needed repairs to infrastructure and another $2 billion worth of equipment that needed replacing. Things were so bad that the American Society of Civil Engineers ranked Pennsylvania’s bridges the most likely to be structurally deficient in the country.

By 2013, the maintenance backlog was so serious that rail operators said some bridges and trestles just wouldn’t be safe – and made plans to eventually close nine of the agency’s 13 lines.

Nick Frontino, Managing Director of Strategy and Operations for the Economy League of Philadelphia, put it this way:

“Don’t get me wrong - positive train control is a good thing, but it’s not cheap, and SEPTA already didn’t have the money it needed to keep up with all its deferred maintenance,” said Frontino. “Both Amtrak and SEPTA are in the hole when it comes to deferred maintenance. But for Amtrak, the mandate came in a year that Congress had already voted to reduce funding – so not only was it an unfunded mandate, it was actually a defunded mandate.”

Of course, it’s not a perfect world. ACT 89 is a big help, but it’s not a magic wand. Two years after the new funding was approved, SEPTA is still working to get ahead on long neglected repairs. Train cars are aging past their useful life, bridges and trestles are needing support, and some of the electrical wires that run over tracks, including those at the central hub at the 30th Street Station, date back to the 1930s.

Just six weeks ago, the sole transformer at the Doylestown station, which had been running since 1931, blew up. “I take that line myself, and I had neighbors calling me to tell me that it was cooking – actually cooking, with smoke coming out of it,” said Knueppel.

Engineers fixed it by borrowing one of the two newer transformers at the Norristown station. “Now we are keeping our fingers crossed that we don’t have a problem I Norristown,” said Knueppel.

And there will be new costs. Amtrak, desperate for capital funding, is instituting a new cost-sharing fee for agencies that use its tracks. Of the 280 miles of track that SEPTA uses throughout the region, 108 miles belong to Amtrak. Starting next year, SEPTA will have to pay Amtrak an additional $22.4 million fee for their use.

The Giant Crum creek viaduct on the Media line, for instance. That structure is 1,000 feet long, 100 feet high and it dates back to 1895. It’s going to cost $50 million to replace the whole thing. It’s just one of many projects that SEPTA’s board has recently approved.

While the states’ bridges and trestle are still much too likely to be considered structurally deficient, engineers are working on plans, spending’s been approved and builders are preparing to start work.

“In 2013, we had no bridges under construction at all. Now we have contracts awarded for 15 different bridge projects,” Knueppel said. “I feel like we’ve really hit our stride, and a lot of things are moving now.”