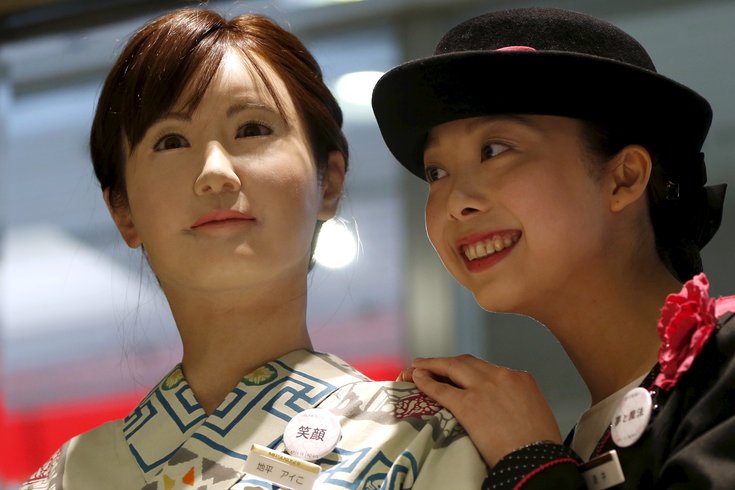 A reception employee of Nihonbashi Mitsukoshi department store (R) poses for a photo with a kimono-clad android robot named Aiko Chihira, developed by Toshiba Corp., during its unveiling at the reception desk of the store in Tokyo April 20, 2015.

Dressed in a kimono and smiling, Aiko Chihira greets shoppers at the entrance of Tokyo's Mitsukoshi department store. But Chihira is no regular employee -- she is a humanoid robot.

Developed by Toshiba last year, the robot made its debut at the store on Monday in a new role interacting with customers.

RELATED: Robot chef serves up the future of home cooking

Speaking Japanese, Chihira, which has human-like features and blinks, can also be programed to speak in other languages such as Chinese.

"It would be good if we can have her provide guidance, or recommend various things in Chinese," said Hitoshi Tokuda, Toshiba's new business development division group manager.

"... People can be looking around and think, 'Oh if Aiko is around, she can speak Chinese'. That's what I hope will happen."

Toshiba has said Chihira has 43 motors which allow it to move. The robot is also programed to do Japanese sign language.

"I would like you to listen to the song that I've put a lot of effort into," the robot said.

After the performance, in which it appeared as if Chihira had lip-synched, the robot asked for applause for Iwashita.

Chihira, currently not programed to respond to customer complaints or questions, is not the only robot to work in retail. Last year, Nestle said it would enlist SoftBank Corp's humanoid robots, Pepper, to help sell its coffee makers at home appliances stores across Japan.