Sen. Casey: Family separation policy is 'straight from the pit of Hell' 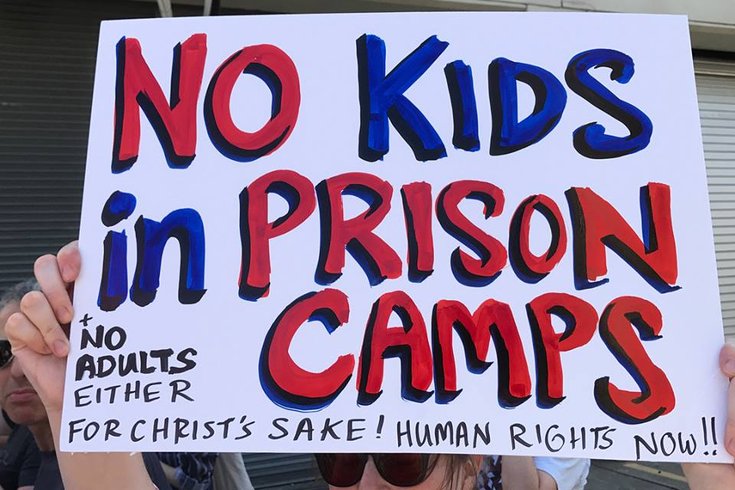 Last week, protestors gathered outside the U.S. Immigration and Customs Enforcement’s local offices to question a White House policy that separates families at the border.

Separating children from families at the county's southern border is “a policy straight from the pit of Hell,” U.S. Sen. Bob Casey said on a Tuesday morning conference call, during which he called on the Trump administration to immediately end the practice.

The call came a day after ProPublica posted audio obtained from inside a U.S. Customs and Border Protection facility and hours before protesters planned to rally against the practice when Vice President Mike Pence comes to Rittenhouse Square for a fundraiser.

“Family separation is not critical to protect the borders,” Casey said during the 15-minute call with reporters. “Anybody who tells you it is is lying. Separation is wrong. It should end today. It is wrong.”

He said what’s happening at the U.S.-Mexico border not only is “undeniably harmful to children,” but fuels “bad guy” critics' anti-American propaganda.

“In the course of the past couple months, Republicans have sent two messages to the world: We don’t keep our promises to young people on DACA and we rip children away from their families,” he said. “It’s the wrong signal for America to send to the world, and it’s contrary to our values.”

As his Republican peer, Pat Toomey, awaits proposals from three senators on his side of the aisle, Casey noted that Sen. Dianne Feinstein’s “Keep Families Together Act” is a viable option.

At the same time, Casey – who has the support of Gov. Tom Wolf on the issue – said fixing this controversial issue shouldn’t take much discussion.

“The solution is not some big debate, or floor time for discussion about laws and bills,” he said. “The administration can end this policy right now, today, and listen to the voices of people from across the country, the four former First Ladies who are not politicians, the American Academy of Pediatrics and a quarter million doctors.

“They’re causing damage to thousands of children because they want to score political points. It’s an outrage. It’s not some Washington argument. They should end this policy today. They could end it this morning if they wanted to.”

This is what family separation at the U.S., Mexico border sounds like.

ProPublica has obtained audio from inside a U.S. Customs and Border Protection facility, in which children can be heard wailing. https://t.co/YEdnD4o6sh

Noting that the Children’s Hospital of Philadelphia would be releasing a statement on the impact later Tuesday, he cited comments from Dr. Julie Linton and pediatrician Charles Nelson as supporting evidence that the policy harms the children involved.

“The debate about this is over. Everyone who knows anything about children and what this does to them knows that the evidence is conclusive,” he said, dismissing any administration claims of it serving as a deterrent. “All the talk about Democrats and Republicans and bills and policies, it’s all a bunch of B.S. I’ll repeat myself: This is a policy straight from the pit of Hell.

“It’s reprehensible. It’s outrageous. And, it confirms what the bad guys around the world say about this country. It’s a crass, cruel policy by one administration. The last two administrations never put in place this kind of policy. The only way to prevent permanent damage (for the children) is to end the policy now.”