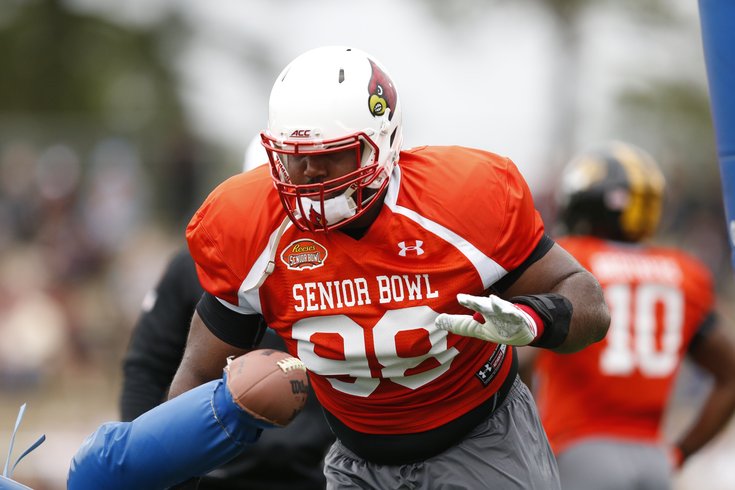 Louisville DT Sheldon Rankins could be an intriguing fit in Jim Washburn's 4-3 front.

MOBILE, Ala. – The first day of Senior Bowl practices is in the books, and the very good prospects have already begun to separate from the pack. Here's what we saw on Day 1.

• There were three players who were invited to compete at the Senior Bowl, but declined to play. They were Oregon DE DeForest Buckner, Michigan State QB Connor Cook, and Alabama C Ryan Kelly. Buckner is going to be a top-10 pick. He can really only hurt his value, so it makes sense for him to skip. Connor Cook, on the other hand, is making a terrible decision. Most evaluators have him well behind other quarterbacks like Cal's Jared Goff, Memphis' Paxton Lynch, and North Dakota State's Carson Wentz. Not competing here is going to be a bright red flag for many teams.

• It's already clear who the best quarterback here is after one day. It's Carson Wentz. He showed off his arm, making several impressive sideline throws that were on the money. One of the concerns Wentz will have to overcome is that he played against lesser competition at North Dakota State. I don't share those concerns, and Wentz absolutely looked the part of a high pick. I don't think he's going to be there when the Eagles pick 13th overall.

In case you missed it, we published a detailed breakdown of Wentz's game early in December.

• Another quarterback I was curious to get a closer look at was Mississippi State's Dak Prescott. He struggled putting the ball on target, often throwing McNabb-esque worm burners, but he got better as the day wore on.

• The best running back here is also already quite clear. It's Louisiana Tech's Kenneth Dixon. He is already a very polished route runner out of the backfield, and has good hands. Over the last two years, Dixon has 64 receptions for 852 yards and 13 TDs. He's not the biggest guy, and he doesn't have breakaway speed, but he runs hard, breaks tackles, catches the ball, and has a knack for the end zone.

Here are his touchdown totals throughout his career as a runner:

If Dixon somehow lasts until the third round (unlikely), the Eagles should be all over him.

• One receiver who has looked good early on is Georgia's Malcolm Mitchell. He got open deep a few times, but the quarterback didn't see him, and he made an impressive one-handed sideline grab on a wobbly throw, while keeping his feet in bounds. Mitchell is one of nine Senior Bowl participants with a jacked up pinky finger.

• An offensive tackle prospect I liked was Le'Raven Clark, whose projection to the NFL will be difficult for many teams, as he played in Texas Tech's spread offense. On Tuesday, he showed impressive athleticism getting out in front of his running back on a toss play. At the weigh-in, Clark had the longest arms of anyone competing here, at over 36 inches. It sure feels like the Eagles will be targeting several offensive linemen in the draft this year.

• I overheard a few scouts talking about Baylor DE Shawn Oakman, who is 6'7, 269, and is ripped. One said "Tarzan Jane," which in scouting vernacular means, "Looks like Tarzan, plays like Jane."

• Two defensive linemen who impressed me were Sheldon Rankins of Louisville and Jarran Reed of Alabama. Reed abused Arkansas OG Sebastian Tretola in a run drill. He reminded me a little of Fletcher Cox in the way he was able to shed blocks. Pure man strength. Rankins, meanwhile, displayed impressive quickness. His highlight came on a very impressive inside spin move that left his blocker in the dust.

• The Jacksonville Jaguars are kind of a joke down here. They are coaching one of the Senior Bowl teams for the third straight year. Why is that bad? Well, the teams with the worst records get dibs on coaching one of the two teams. After the Jags decided to retain head coach Gus Bradley this year, they were roundly praised by national media for keeping "continuity." Bradley is 12-36 with the Jags. That's fine if you're OK with their approach, but let's not praise the Jags for anything.

Their practice was ugly. During one stretch, the South team players had four fumbled snaps in a span of about 15 minutes.

The North team is coached by the Cowboys. They went from coaching the Pro Bowl to coaching the Senior Bowl in one season. Here's a chart showing wins gained/lost from 2014 to 2015: