Sheriff's Office: People with warrants must choose between shelter from Hurricane Irma or jail

As you’re probably aware, Hurricane Irma has started its path of destruction through part of the Caribbean and could potentially slam Florida in the coming days.

What you probably didn’t know is that Americans with criminal warrants are faced with a choice between seeking shelter and getting locked up in one county down in the Sunshine State.

I mean, sure, it’s questionable from a human-rights perspective, but whatever. We live in a land of big, tough law-and-order posturing these days, so why not let people risk death, amirite?

So that line in the proverbial sand was written in a series of four tweets between 9:30 and 10:16 a.m. Wednesday morning by the social media folks at the Polk County (Fla.) Sheriff Office.

It’s a law enforcement agency, under Sheriff Grady Judd's watchful eye, that features a picture of three deputies holding a cute puppy under its mantra “Proud to serve Polk County,” a landlocked county sandwiched between Orlando and Tampa about 200 miles northwest of Miami. Aw. So adorable.

The tweets, which you can see embedded below, started arriving just two minutes after a declaration that “we thought we were safe in land-locked Polk, but we got hit by” Hurricanes Charley, Frances and Jeanne in 2004.

After acknowledging that things could get really bad 'round their parts, they noted:

If you go to a shelter for #Irma, be advised: sworn LEOs will be at every shelter, checking IDs. Sex offenders/predators will not be allowed

If you go to a shelter for #Irma and you have a warrant, we'll gladly escort you to the safe and secure shelter called the Polk County Jail https://t.co/Qj5GX9XQBi

If you have a warrant, turn yourself in to the jail - it's a secure shelter https://t.co/UFNGNafJh8

We cannot and we will not have innocent children in a shelter with sexual offenders & predators. Period. https://t.co/DlhqjqFrkM

Obviously, nobody wants sex offenders and predators near their innocent children. When you start off saying sworn law enforcement officers “will be at every shelter, checking IDs,” though, you’re not talking solely about sex offenders at all.

Nope, that applies to anybody with a warrant, down to – and including – jaywalking and shoplifting. Heck, you can extend that out to DREAMers and people without valid ID without making much of a stretch.

By puffing its chest out, the Polk County Sheriff’s Office made it known that they’d just as soon let people with petty warrants risk death rather than allow them the dignity of safe shelter from a potentially deadly storm.

They're pretty much saying all lives don't matter as much as their website's puppy prop.

It’s emblematic of a nation so convinced it must live in fear that its weaker-minded citizens are willing to cede all power to militarized police forces. 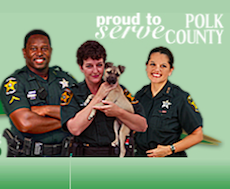 The Polk County Sheriff's Office website features an image of deputies with a cute puppy.

It’s part and parcel of a mindset that’s driving a wedge between all Americans.

It’s sickening, disgusting and it’s un-American. That goes for both the message set forth, and the defense it elicited from minions so desperate for the comfort of their woobies that they become pawns to the police state.

Pro tip: If you want to get bad people off the streets, Polk County Sheriff’s Office, don’t use a potentially life-threatening weather event as a prop to do your job for you. Protect-and-serve like you're supposed to be doing when the weather's nice.

People with warrants are deserving of human rights, too. Here's hoping nobody dies because of a sheriff office's false bravado.