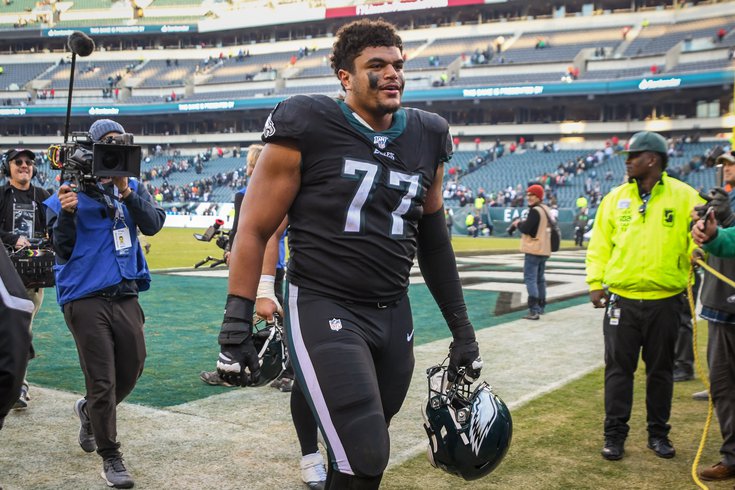 Before we even get started here, no, the Philadelphia Eagles should not exercise Andre Dillard's fifth-year option, but I could see them talking themselves into it. So let's explore.

To begin, what is the fifth-year option?

In 2019, Dillard was drafted 22nd overall, so he would fall into the latter bucket. According to OverTheCap, the projected cost for exercising Dillard's fifth-year option is $12,604,000.

Got all that? Cool.

Dillard's standing with the team

There's little question that Dillard is currently on the trade block.

He had a bad rookie season (and not just at RT) in 2019, before being lost for the season in 2020 with a torn biceps. He entered 2021 training camp in a competition with Jordan Mailata for the starting LT job, but it was crystal clear after only a small handful of practices that Mailata was going to run away with the job.

Dillard started five games at LT in 2021 and played reasonably well. He showed that he belongs in the NFL and could even start for many of the offensive line-starved teams across the league.

With the Eagles, there isn't really a good fit for Dillard going forward. Mailata will be the starting LT for the foreseeable future, and Lane Johnson is coming off an All-Pro season at RT. Dillard has shown so far in his career that he can only play LT, so he doesn't really even have value to the Eagles as a swing tackle.

Howie Roseman recently pushed back against the idea that Dillard can't play RT, however, when Johnson was missing for several games during the 2021 season, Mailata started at RT and Dillard filled in at LT. The Eagles have shown in the past that they would much rather substitute an offensive lineman off the bench directly for the injured/missing player instead of having multiple positional changes along the line. They made an exception with Dillard.

Dillard is also a bad candidate to move inside to guard, because his biggest flaw is that he struggles anchoring against power. Some of the nastier DTs in the league would eat him alive in there. So it's seemingly starting LT or bust. That has value elsewhere, but not in Philly, unless Mailata gets hurt or he moves to RT to replace an injured Johnson.

Obviously, Dillard is not worth anything close to that $12.6 million figure noted above.

So then why is this even a question?

The deadline to exercise fifth-year options is May 2, which is the Monday after draft weekend. If the draft comes and goes and the Eagles have not yet found a trade partner for Dillard, there could be temptation for them to exercise that option, thus prolonging their control of Dillard's rights for an extra year.

Roseman has shown in the past that he will hold out on trading players, sometimes to the Eagles' benefit, but also sometimes longer than he probably should, as evidenced by the team's handling of Zach Ertz and Fletcher Cox last year. The Eagles have also wildly overrated their own players at times, with the most recent example being the $14 million they paid to Cox on a one-year deal this offseason.

Ultimately, however, if the Eagles were to exercise Dillard's fifth-year option, it would hurt his trade value, as his guaranteed $12.6 million salary in 2023 would transfer to his new team. That could be a major turn-off to potentially interested suitors around the league.