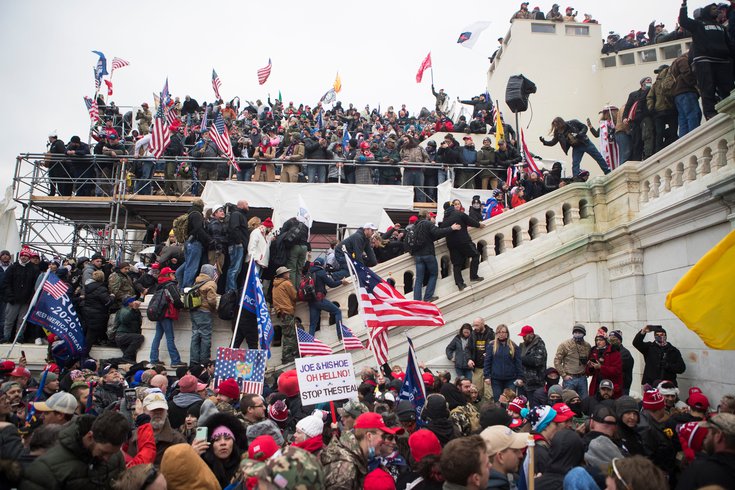 Pro-Trump rioters storm the U.S. Capitol on Wednesday afternoon as lawmakers inside debated the certification of the presidential election.

Surveying the scene unfolding at the steps of the U.S. Capitol building, Sixers head coach Doc Rivers had a clear message prior to Wednesday's game against the Wizards — this is disturbing, but it is not what he believes America stands for or will tolerate.

"It's pretty disturbing, obviously sad," Rivers said Wednesday. "But what it is not is, I keep hearing like this [an] attack on democracy. It's not. Democracy will prevail. It always does. It shows a lot though."

With supporters of Donald Trump storming the steps of the Capitol, Rivers pointed out the results of Tuesday's special Senate election in Georgia, which many outlets have called both races in favor of Democrat candidates Raphael Warnock and John Ossoff, noting the double win as a point of pride for the country. In his mind, it sent a clear message that, "the masses have spoken."

That is the point of contention today, as Trump continued to make unsubstantiated claims about the integrity of the 2020 election won by Joe Biden. A range of reports from D.C. on Wednesday described everything from an armed standoff inside the Capitol to the discovery of explosives.

"When you saw the protests in the summer, you saw the riots, or more the police and the National Guard and the Army, and then you see this and you saw nothing. It basically proves the point about a privileged life," Rivers said Wednesday. "I'll say it because I don't think a lot of people want to: could you imagine today [if] those were all black people storming the capitol, and what would have happened? So that, to me, is a picture that's worth 1000 words for all of us to see, and probably something for us to reckon with, again."

"No police dogs turned on people, no billy clubs hitting people, people peacefully being escorted out of the Capitol. So it shows that you can disperse the crowd peacefully, I guess, would be the one thing."

The image of police dogs being unleashed on American citizens is something Rivers, born in 1961, remembers vividly from his childhood. It's a point he would bring up again when discussing how to keep his players focused on the task at hand, a Wednesday night meeting with the Wizards.

Rivers, quite unfortunately, has plenty of experience leading his teams on the floor while trying to keep their minds off of things happening away from it. He was the man tasked with leading the Clippers in the midst of the Donald Sterling scandal in 2014, and Rivers delivered a passionate speech from the bubble this past summer about police brutality in the wake of Jacob Blake's death.

The Sixers' new head coach knows his players did not grow up with the same images and experiences that he did, which extends to the visiting Wizards, who have concerns of their own to grapple with heading into the game.

"It's such an individual emotion," Rivers said. "As an older black male, I've seen police dogs being unleashed on people, and then you see today where there's nothing, and so that's an emotion that I have, right? Tobias and those guys probably don't have that emotion. And I don't know how many guys have been watching TV today, you just don't know but you know it's gonna be the talk for both teams."

"Washington, just think about them. It's where they live right now and so they have a lot on their plate, probably worried about public safety of their families. So this is a tough one tonight I gotta tell you, and we'll see how it turns out."