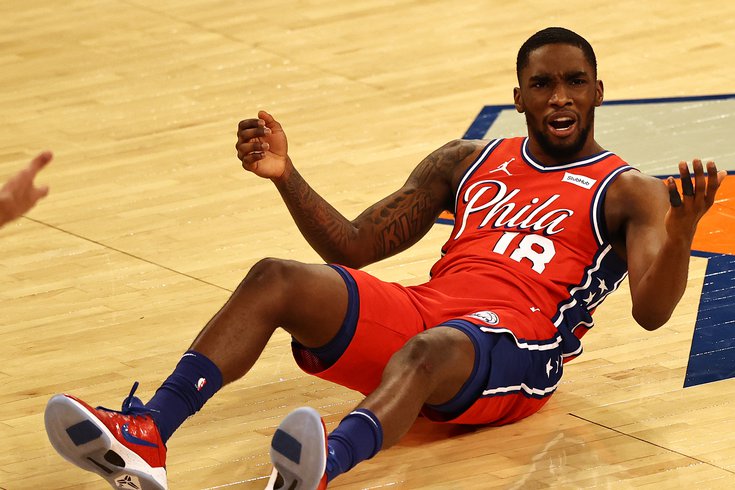 Sixers guard Shake Milton reacts after a no-call against the New York Knicks.

The Sixers used another strong defensive performance to survive a terrible night on offense, persevering for a 101-100 overtime win on the road.

• I am not afraid to admit I'm completely shocked at how high Philadelphia's defensive floor has been without Joel Embiid. Every sign you could have looked for — the eye test, the metrics, basic common sense — would have told you they were going to have a tough time getting stops without their last line of defense. With everyone bought in, they have minimized the impact of his absence, which in my book is an extraordinary accomplishment.

And no, this hasn't just been Ben Simmons propping everybody else up. Dan Burke, who came to Philadelphia with a reputation for getting career-best results out of guys on defense, has lived up to that billing from Doc Rivers' bench. Guys like Mike Scott, Furkan Korkmaz, and Shake Milton have all overachieved relative to their track records, playing smarter and harder within a more aggressive scheme.

With the "weak links" stepping up, it has made it even easier to see the talents of the better defenders shine through.

Defensively, you're seeing this team play like they're on a mission, a reflection of a strong culture and a collective belief that bigger things are in store for them. They offer professional effort after professional effort, and offensive struggles are not used as excuses to let go of the rope on defense. Those are championship habits, even if they don't ultimately prove to be a championship team.

(And when you look at their offense on Sunday, boy, they definitely don't seem like one!)

• This was a strong weekend for Shake Milton, who followed up an excellent game against Sacramento with another one against the Knicks. The majority of his damage was done from the midrange, with Milton lurking and ducking behind Dwight Howard screens to find the sliver of daylight he needed to get his shot off.

With the starting group having major execution issues all night, Milton was as central to this victory as any all season, lifting the all-bench group to respectability and giving the starting crew a good chance to get a road win.

Confidence has not always overflowed for Milton this year. One of the best signs during a great night was a pull-up three he canned early in the fourth quarter. Not because he made it, which is always ideal, but because he took it in the first place. Milton has been more gun-shy beyond the arc this season than his track record suggests he should be, and if he can start to get it rolling off of the bench, look out.

• Danny Green has been in terrific form since returning from the All-Star break, terrorizing opponents in passing lanes and blocking his fair share of shots on the wing. If this is what he looks like with a week off to collect himself, the Sixers should give him the final week of the regular season off and prepare for him to go ballistic once the playoffs begin.

Before halftime had arrived on Sunday evening, Green had already piled up three blocks against the Knicks, including one highlight-reel play where he caught Julius Randle from behind and forced a jump ball, timing his help about as perfectly as one can.

What a block from Danny Green. Impeccable timing! pic.twitter.com/4yTj9C1SAe

These plays are becoming more frequent lately, but Green makes his money in all the plays where you don't really notice him, making the key rotation to eliminate an opportunity before it pops up. And with Green finding his place within this defense, he clearly feels empowered to freelance a bit more than he did early in the season, which is leading to increased deflections and hands on balls when he senses hesitation in the opponent.

He sported a goose egg on offense for almost the entire night, turning in a performance reminiscent of teammate Matisse Thybulle. But Green was so good at the rest that it was hard to care, and hitting that first shot of the night midway through the fourth didn't change how good he was defensively. Green is always ready for the moment, make-or-miss, and he canned what looked to be the biggest shot of the game in the final 30 seconds, canning a late-clock runner to extend the lead to three (not to mention a pair of big threes in overtime).

In related news, if the Sixers aren't getting a needle-moving player by sending out his salary, there's no way they can move him at the deadline. He is a foxhole guy.

• Do not read this as a case for starting Furkan Korkmaz in any game that truly matters, but man, Korkmaz has a knack for coming out hot when he gets a surprise start this season. The Turkish bomber basically was Philadelphia's offense early in this one, hitting a trio of triples and launching three more, content to heat check away from deep.

If you're comparing him to other players of his caliber, I think Korkmaz is a best-in-class "grifter." He gets more guys to jump on pump fakes beyond the arc than any role player I can think of.

• Tyrese Maxey was given a chance to rejoin the rotation on Sunday evening, and you could see the difference it made to have more than one guy who can dribble on the floor at the same time. If a possession stalled out and found its way to Milton, he was money all night. If the ball ended up in Maxey's hands instead, his pace was something different the Knicks had to account for, and he caught them by surprise on several occasions, creating shots for himself and others.

• Matisse Thybulle is not a shooter I trust much, but he shows no fear when an open shot comes his way. That confidence was critical in the fourth quarter, when he canned two huge threes on a night where the entire team struggled to get them to drop.

• This was a game that could have been mostly done-and-dusted at halftime if the Sixers had been reasonably competent on offense. Despite Korkmaz's aforementioned hot start and a strong effort from Shake Milton, they surrendered almost all of their lead before halftime and let the Knicks right back into the game.

The story starts with their two best players on the floor, Tobias Harris and Ben Simmons. After starting the season with a quick trigger from deep, Harris has started to play a bit more indecisively, leading to a few too many mid-post possessions night-to-night. Those are low-value shots even for a tough shotmaker like Harris — the degree of difficulty is high, and the odds of drawing a foul are low.

Harris would slowly work his way to the line as the game went on, but he continued to dwell in low-value areas offensively, coughing up some absolutely brutal turnovers in the guts of the game. And he made matters worse with a chance to ice the game in the final 30 seconds, bricking a pair of free throws to open the door for Julius Randle to walk through. He somehow managed to make it worse by botching the final play of regulation with Simmons, letting Julius Randle get a shot attempt to win it on the ensuing run out.

(At least he made the pair to put them ahead in OT. Redemption!)

Simmons wasn't especially inefficient against the Knicks, and I thought he had some nice flashes as a roll man getting downhill. But he showed all his worst qualities as an offensive player against the Knicks, needing some crazy bail-out threes from Green in overtime to make it all look better.

His feel for when to make a move just appeared to be off all night — he posted players (Julius Randle) he'd be better off attacking in a face-up, and he faced up against players who would have more trouble guarding him with strength in the post. It wasn't an ultra-reluctant night by his standards, but Simmons had opportunities to get to the rim on several occasions where he opted to dump the ball and make moderate-to-high risk passes instead. Beyond that, he just disappeared for a long stretch of the second half.

At times, this game invoked memories of last year's disastrous offense, with these two guys both attempting to post up in the span of the same 24 seconds of shot clock. Neither guy draped themselves in glory in crunch time, and they were fortunate not to get punished for it.

• All of that being said, this felt like a great opportunity for Doc Rivers to break out the small-ball lineups in higher volume. If spacing is an issue and the opponent is overplaying the passing lanes, you have to do something to make them feel uncomfortable sending help. You don't do that by exclusively playing Tony Bradley and Dwight Howard at center.

Those two guys have been in a good run of form for the Sixers, so I certainly understand seeing what they give you as a tandem to open the game. But with the game remaining a slog deep into the fourth quarter, it felt like a situation crying out for a change in tactics. It took until less than two minutes remained in overtime for Rivers to finally make the switch, and by that point, it was too little, too late.

(I was probably not the first and I won't be the last guy to suggest it, but this group is desperate for a stretch big who can give them something different than the current crop of backups behind Joel Embiid. I still don't think they'll defend well enough for it to matter, but it would be nice to see that in practice rather than having to  assume it will always be ugly on that end of the floor.)

• Seriously, who the hell scheduled the Sixers for an 8 p.m. game on the East Coast on a Sunday night? What kind of idea is that? Please do not let that person anywhere near the schedule in the future.

• I love Marc Zumoff and Alaa Abdelnaby, but their homer-ism when narrating the hostile act review in the third quarter was absolutely ridiculous.

Do I think Tony Bradley was trying to injure Julius Randle? I doubt it. But the guy wrapped his arms around Randle's knee/leg and pulled, which is something that would get you sucker-punched in basically any random pickup run you could play in. Acting incredulous that a guy would take exception to it was just silly.

• The Sixers get to follow a brutal overtime game against the Knicks on the second half of a back-to-back with a flight across the country and a game the day after they land. The hits just keep coming.