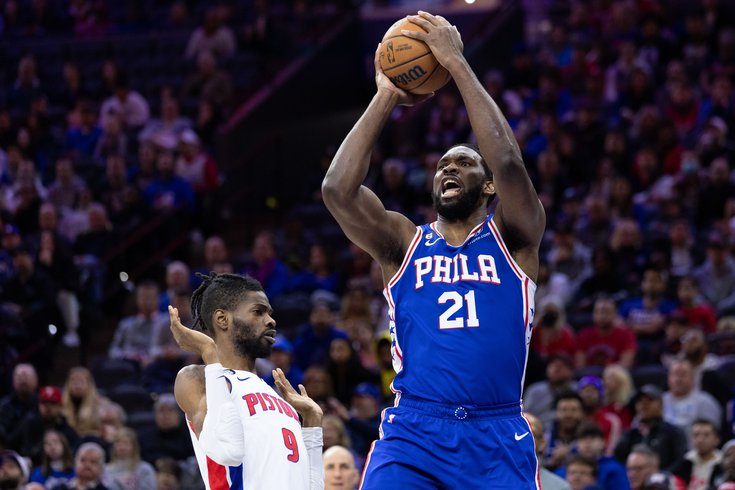 The Sixers took a sledgehammer to the Pistons and never stopped swinging, winning a 147-116 blowout that wasn't as close as that lopsided scoreline suggests.

• Joel Embiid had the most bored 22-point half in the history of basketball on Tuesday night. Yes, I mean bored, not boring, because the opponent on the floor did not do anything to capture his attention during this game. He got exactly one wake-up call, with Nerlens Noel picking his pocket early in the first quarter, and that was all he needed. From there, it was too damn easy:

move, get out the way! pic.twitter.com/F0VErmKJQr

This was just about the ideal return game for Embiid, who lit up the scoreboard and never really exerted himself, easing back into the lineup after a few games on the bench. As they did in the previous meeting against Detroit, the Sixers basically just spammed pick-and-rolls, the difference being that Embiid ended his rolls around the free-throw line. It gave the Sixers a clean look at the basket whenever they wanted it, with Detroit conceding open look after open look to Embiid.

I can't say I was enthused by his defensive effort, but I suppose you could argue he just scared the Pistons into missing layups — several Detroit drivers seemed to anticipate he was coming to block a shot, only for Embiid to hold back and watch guys fling wild shots off of the backboard.

The Sixers stayed in autopilot at the start of the second half, insofar as you could be in autopilot in a game where you built a 20+ point lead. At that point, you saw the hopelessness of Detroit trying to guard Embiid, old pal Nerlens Noel simply not up to the task of guarding him in and around the paint. Embiid got to play a bit of bully ball in the third quarter, and in hilarious fashion, he made it impossible for the team to sub him out of the game, fouled on several consecutive possessions with Montrezl Harrell waiting to replace him for the rest of the night.

• For the second consecutive game, James Harden made the Pistons look like a glorified AAU team. And good on him for doing so — he was a huge reason the Sixers coasted to a giant lead to end the first half, and he helped them put it totally out of reach in the second half.

It had all the hallmarks of a great Harden performance. He punished the Pistons for putting weaker defenders on him, bullying through smaller players for layups and quick drop-offs for his teammates. When the Sixers got out in transition, which was most of the game, Harden was equally dangerous as a scorer and passer, using Euro steps and hit-ahead passes to carve up Detroit on the go. Some ugly turnovers aside, it felt like Harden made basically all the right decisions, whether he saw an opportunity to hoist a catch-and-shoot three or an extra pass to make to his shooter in the corner. Hell, he even canned a nice midrange jumper to oohs and aahs from the crowd after methodically crossing his man back and forth over the course of a full shot clock.

You're not going to see more effortless triple-doubles than the back-to-back ones we got from Harden this week. He and Embiid got to laugh together on a few second-half rebounds, Embiid wearing a shit-eating grin as if to tease Harden that it took him as long as it did to get his 10th. That kind of game.

• Tobias Harris was the only guy who appeared awake for the first few minutes of the game, and that helped Sixers get off to a good start that was basically enough to put this one out of reach. Genuinely, when he opened the game with seven consecutive points, it already felt like this game was over.

Those early buckets weren't all as easy as you'd expect against Detroit. Philadelphia's first possession of the game featured a bit too much overpassing, and it was up to Harris to hit a bail-out shot on the baseline, hitting a high-arcing shot that got them started off right. The rest of his night was geared more around off-ball play, but the Sixers made a conscious effort to get him the ball early on, running a flex action four or five times in the first few minutes of the game.

No shame in a good, old-fashioned, bum-slaying outing. When Harris got handed favorable matchups in the mid-post, he took care of business, and he spent the rest of the night waiting in the corners, ready to shoot and not often having to.

• A bit of rest seems to have been good for P.J. Tucker. Who could have guessed that reducing wear and tear on a guy in his late 30s could pay dividends?

I understand that most, if not all teams are going to be better than the Pistons, but this game is a great example of why the team should be protecting his health and buying him more rest when they can. Tucker moved better than he has for most of the year in this game, and that's in spite of the fact that he was coming off of an illness entering this game. He made effort/energy plays on the glass, looked a bit more vertically explosive, and he even canned some corner threes for good measure. Though he got burned on some overzealous reach-ins, I thought his help defense was quick and assured, arriving in a way that often flustered the Pistons.

If he looks more like this guy than whoever was impersonating him on the floor in November and December, the Sixers become that much more dangerous.

• Multiple Jaden Springer highlights in the fourth quarter? Nearly nine minutes of burn for Jaden Springer? Oh yeah, this one was a blowout.

• Ball security was downright pitiful for Philadelphia in this one, and a real basketball team would have punished them for playing like the early-Process Sixers. 12 turnovers at halftime is a gruesome number against this opponent, and it honestly could have been worse. P.J. Tucker drew a foul on a play in the second quarter that wiped out a near-certain turnover, a pass that he threw to absolutely nobody that would have bounced aimlessly toward halfcourt.

Everybody contributed to this problem — Embiid had a couple of stinkers, De'Anthony Melton threw one away, Montrezl Harrell dropped one into the hands of the Pistons, each one felt even worse than the last.

Oh well, they still beat the snot out of these guys.

• I've written a version of this every time they've played this year, but dear lord, the Pistons STINK. I'm not sure there's absolutely anything useful to conclude from games against this team, even a healthier version of this team. And the difference between them and the Process Sixers is that this team is this bad while actively trying to win. Yuck!

You don't get a lot of bad crowds at Sixers games, or Philadelphia sporting events in general, but this was about as lifeless as it gets, and I can hardly blame them. Playing an undermanned version of the worst team in the league, the home team showed up with less urgency than a kid with a summer reading assignment. Joel Embiid spent a lot of the first half barely making it to halfcourt on offense, letting everybody else run in transition after the Pistons inevitably missed another shot.

You don't get to load manage during comfortable wins that often, and I envy the Sixers for doing so in this one. It didn't exactly make for an appealing product, though.

• The officials were simply brutal in this one, not that it mattered much in a game with such a significant talent gap.

• Not related to the last point — the number of fouls committed in extended garbage time nearly made me leave the arena. Absolutely absurd from both teams. I can't imagine a quarter has featured more fouls than that one all year.