Stay or go: Will Furkan Korkmaz have a home with Sixers moving forward? 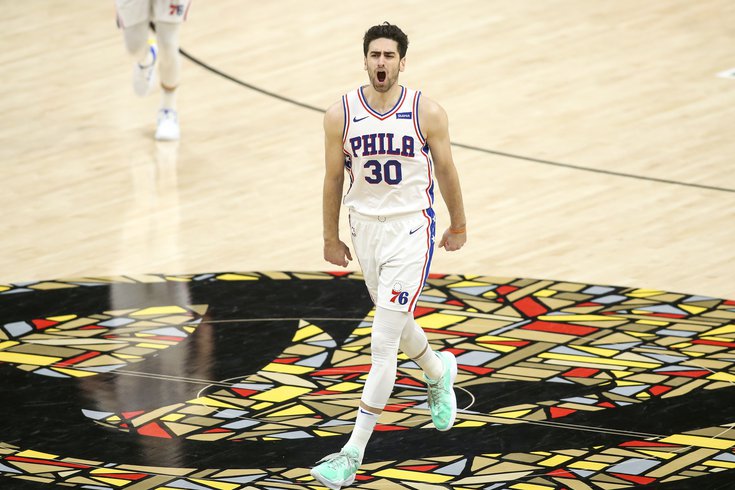 Philadelphia 76ers guard Furkan Korkmaz reacts after hitting a three pointer in the fourth quarter of Game 4 against the Atlanta Hawks.

Following a week of vacation, Furkan Korkmaz is next on our hit list. I hope you all have been doing well while I avoided getting sunburnt and drank fruity beverages.

Coming into the first season of the Doc Rivers era, Furkan Korkmaz looked poised to be a big beneficiary of a change in personnel and staff. Rivers has historically done a good job getting the most out of movement shooters, though admittedly it's not exactly difficult to get offensive value out of the likes of Ray Allen and JJ Redick.

Though Korkmaz wasn't a disappointment this season, his numbers dipped after a breakthrough year in 2019-20, and he represents probably the toughest call of any pending free agent on the roster this season. Were Korkmaz's flashes good enough to bet on a step forward next season, or do they need an older, more reliable player taking over his role off the bench?

Part of the appeal of Korkmaz is that you don't have to pigeonhole him into a single role on offense. He's a capable standstill shooter if you just want someone sitting in the weakside corner or in Joel Embiid's vision with his back to the basket, and he's capable of shotmaking on the move and doing a little playmaking with the ball in his hands. But Korkmaz's signature skill wasn't quite as good as it was a season prior, and the Sixers asked him to do a bit too much elsewhere, a product of playing with a second unit devoid of reliable creators.

Korkmaz actually showed slight improvement as a pull-up shooter in 2021, an encouraging sign for a guy who saw his usage climb under Rivers. But Korkmaz featured in a lot of Philadelphia's worst offensive possessions, meandering, clock-draining periods of the game where he was asked to do too much off of the dribble. Korkmaz had an uptick in possessions where he shot after dribbling the ball over seven times, according to Second Spectrum tracking data, and many of those possessions led to off-balance runners and floaters from spots on the floor where he found little success. The Turkish wing made less than 29 percent of his shots from 3-10 feet, and his efficiency dropped from every single area of the floor despite ostensibly having more room to operate.

When Korkmaz was in more of a static role spacing the floor for starter-heavy units, he excelled all season. When the Sixers played lineups with Korkmaz, Ben Simmons and Joel Embiid on the floor, they outscored opponents by over 27 points per 100 possessions, posting elite offensive (124.4) and defensive (96.8) efficiency across the board. Serving as a spot starter throughout the year, Korkmaz was able to replace different members of the starting lineup and keep the Sixers humming on both ends of the floor.

While that says much more about the production of the first unit guys than it does Korkmaz, it does show that he is able to be a positive contributor (or at least not actively harmful) when he is in the right role. And there's another fact worth pointing out within that context — Korkmaz took a legitimate step forward as a defender for the Sixers this season, putting together some downright excellent possessions throughout the season, even in the playoffs.

Though that didn't take him to the level of a good or impactful defender, it did show that Korkmaz has learned plenty over his last four years in the league, showing increased sharpness with his reads that helped him deliver on the competitiveness and commitment he has pretty much always had on that end. Korkmaz still looks pretty wispy out there, but he's less liable to get completely blown through on defense, and by simply being in the right place at the right time more often, he is doing his job as one of the lowest-expectation defenders on the floor.

Korkmaz has had quite an interesting career in Philly to date. He was brought back in a surprise deal two years ago after it seemed the franchise (and perhaps the league) had given up on him, and he has put in the work to improve some of his weaknesses while delivering some needed offensive punch. He's still one of the younger guys on the roster — Korkmaz doesn't turn 24 until late July — and there have been enough positive performances from him over two years that he's a reasonable bet to be a long-term contributor.

With more time, you could talk me into Korkmaz turning the opportunities he has gotten as a ballhandler into a credible pick-and-roll threat, albeit in a miniature role. If Rivers works to stagger his stars more next season — a big if, given the history there — Korkmaz could be one of the primary beneficiaries on the bench unit. Having Korkmaz on the floor for more minutes with either Simmons or Embiid would be a good thing. He can hit transition threes on the break with Simmons, serve as the strongside outlet for Embiid in the post, and the need for shooting will persist for this team years into the future.

However, Korkmaz seems to fall in a tricky spot as a guy who is probably too inconsistent to have the role he has on a good/contending team right now, but also probably a bit too young and good to be on the fringe of a rotation when he could be getting more opportunities and money elsewhere. If the Sixers are in a position where Korkmaz needs to be a frequent spot starter again, they're probably not in a good place. If Korkmaz is buried on the bench and a situational player for Philly next year, he's certainly not in the right place for his own personal growth.

The picture for Korkmaz is also complicated by the need to develop some of the other higher-priority talent on hand. With Tyrese Maxey coming into his own toward the end of his rookie season, lead ballhandler reps with the second unit may dry up for Shake Milton, who then slides into a competition for reps as more of a pure shooter and slasher type. Given Milton's ability to create his own shot, his shooting pedigree, and the team-friendly deal he's still on for the next couple of seasons, the Sixers may feel less inclined to re-up Korkmaz even if the only real hurdle is financial*. Factor in the presence of a younger shooting prospect in Isaiah Joe and the head coach's stated desire to get a bit bigger on the bench, and both parties could very easily decide to move on.

(*The Sixers have full Bird rights for Korkmaz, so they could in theory offer him anything up to/including the max.)

If player and team can find a sweet spot with role and money, you could certainly make a case to bring him back. If the Sixers felt closer to being a real-deal contender than they showed themselves to be, perhaps Joshua Harris and Co. would just pay him what he wants (which I don't think will be a ton) to be an end-of-bench guy for a potential title-winner.

But I have a hunch someone will offer Korkmaz a little too much this summer, offering him more touches and dollars on a team with lower expectations than this one. Maybe that ends up being wrong, and it wouldn't be the first time Korkmaz re-upped with Philly to my personal surprise.