What you missed from Sixers vs. Thunder, featuring a Joel Embiid triple-double 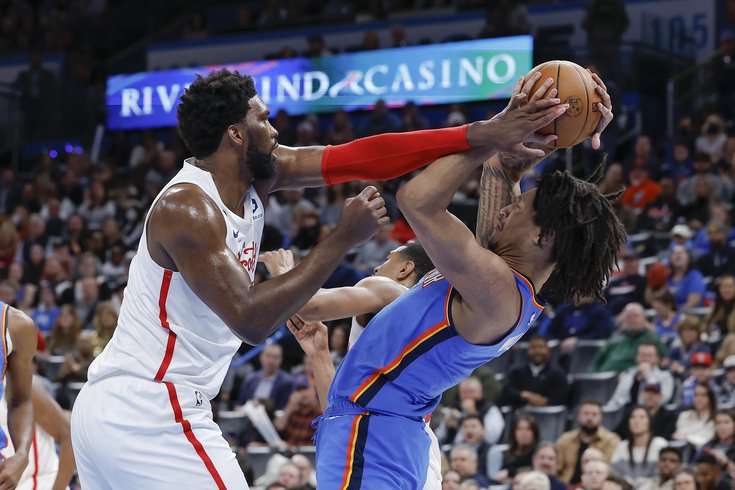 While you were sipping bubbly and listening to some jams on New Year's Eve, the Sixers were busy handing a beatdown to the Oklahoma City Thunder, earning an easy 115-96 victory to close 2022 out.

For those of you who missed the game or just want a refresher after a long night at the races, here's what happened on Saturday night:

The big takeaway: Everybody eats

This was a game that was basically over by the time the first quarter ended. Undermanned or not, the Sixers threw a haymaker in the opening frame and the Thunder were hardly equipped to absorb it. You get off to a 20-6 start to the game, and you're already well on your way to victory.

If you were just box score watching — understandable, it was a New Year's Eve game —  you might be bewildered by the idea of the Sixers cruising with Joel Embiid scoring just 16 points on 17 shots. The Sixers shrugged that off with other contributions from Embiid, but also by not really relying on him to set the pace and tone of this game on offense. Everybody except for Georges Niang scored in the first half for Philadelphia, as they took advantage of a cold Thunder start by pushing the pace and hunting early shots wherever they could.

The only member of the starting lineup who didn't crack double digits was Matisse Thybulle, and even he can walk away from that game feeling good about his output (nine points on 3/3 from deep). Their pace of play was a point of strength throughout the game, particularly on live rebounds, where the Sixers made a lot of their money early in this one. The moment somebody secured a defensive rebound for the Sixers, it felt like they had a quality look on the other end almost immediately. A Montrezl Harrell duck-in here, a wide-open Thybulle corner three there, and suddenly the lead was ballooning to 20+ points.

Pick a player who got minutes on Saturday and there was probably something to celebrate. Oklahoma native Shake Milton had another excellent night in a spot start, pouring in 18-4-5 in a balanced effort from start to finish. The Sixers technically lost the offensive rebounding battle to the Thunder by a margin of 15-14, but the Sixers rebounded a higher percentage of their misses, with Harrell having a good night on the o-glass.

And yes, Embiid got his triple-double with just over four minutes left in the game, which felt entirely unnecessary but brought some smiles to the faces of Embiid and his teammates. At the least, we could say it reflected his ability to impact the game even on a down night shooting the ball. When the Thunder saw him waiting around the rim, the desire to drive at the basket plummeted, and they paid for it when they tried to challenge the big guy at the summit. Really, the defensive end is where this game was won because the Thunder had almost nothing going in the halfcourt all night. Oklahoma City turned in one of the worst offensive games any team has played all season, the Thunder were just completely unable to score at the rim.

Just a nice, easy victory that sent Philadelphia into the new year feeling good. Having watched some absolute stink bombs on New Year's Eve — the Pacers handed them an absolute ass whooping a few years back — it was nice to see the Sixers on the right side of a blowout, coasting into 2023 with a W.

Player of the game: Tobias Harris

There's nothing like a perfect half from the field, which is what Harris gave the Sixers on Saturday night. As important as the clean stat line was how he got there,  moving back into more of an on-ball role with their two most dynamic backcourt players out for injury management.

Harris got to do a lot of the things he ostensibly likes to do on offense, and the lineup configuration helped, as it allowed him to operate as a true four for most of the night. Matched up with guys like former Sixers player Mike Muscala, Harris often had a speed advantage while attacking from the perimeter, and he used it to get to the paint and force the Thunder to make tough choices. If they didn't bring help, he scored, and when they did, Harris made the simple reads to set up teammates for good looks of their own.

The synergy between Harris and Embiid was excellent in this one, those two weaving through dribble handoffs and pick-and-rolls with excellent pace. When the Thunder tried to overplay the handoffs, I thought Embiid did a nice job of reacting on the fly, most notably on Harris' end-of-half dunk where the big man created an open path to the rim with a half-turn:

It's yet another stellar performance in a season filled with games showing off Harris' versatility. The ability to serve as their center-stage performer at a moment's notice has helped the Sixers win in some tricky spots this year.

(I think De'Anthony Melton had a good shot at this honor for his two-way play.)

• How's this for a stat? The Thunder shot just 42.9 percent at the rim on Saturday night, a number that seems borderline impossible for a professional basketball team. For the sake of comparison, the Sixers shot 67.6 percent there, which is right around the median performance for a team this season.

Embiid deserves quite a bit of credit for his work there, the big man added four blocks to his triple-double for good measure. Keeping Shai Gilgeous-Alexander down is remarkably tough as a result of his ability to throw you off-balance with insane footwork, and Embiid managed to wait him out just long enough on a few possessions, leaving OKC's star guard wanting.

• De'Anthony Melton had some absolutely spectacular plays in transition defense on Saturday night, making up for mistakes or missed shots from his teammates. He also did a nice job of punishing Thunder defenders, including Gilgeous-Alexander, for porous perimeter defense.

There are guys who are better athletes than him on paper, but Melton gets the absolute most out of his athletic tools, which are nothing to sneeze at. Part of the reason I am bullish on the Sixers in three-guard looks is that Melton plays a lot bigger than his height would indicate. He goes up high and hard for rebounds, trying to high-point the ball instead of hoping it will fall into his hands.

• A perfect night from three for Thybulle is always worth celebrating.

• Any win on a back-to-back at the end of a road trip is one you should celebrate, regardless of the opponent.

• How much of Isaiah Joe's improvement in OKC comes down to the change in hairstyle? The current look seems to suit him better.

Things to clean up

• Thybulle had five fouls in 21:36 of playtime. He deserves credit for the good work he did on defense and his part in slowing down SGA, but he has to be more disciplined to be a high-minute guy for this or any team. Doc Rivers pulled him just seven seconds into the third quarter when he got caught holding his man as he cut off-ball. It's like he didn't even read my resolutions article, smh.

(In fairness to Thybulle, he was not the only guy to get baited by SGA in this one. Danuel House Jr. offered little of the upside and all of the same downsides when he drew the assignment.)

• Embiid staying in this game long enough to get the triple-double was not my favorite choice in the world. This game was put away in the first half, and I would have rather seen him sit the entire fourth quarter than pick up a meaningless 10th assist.

• Niang is probably going to hit a three again sometime this season, but boy, he is in a rough patch of form over the last week. 0/3 from deep on Saturday night, and when he runs cold, he's not offering a whole lot.