New Year's Resolutions for the Sixers heading into 2023 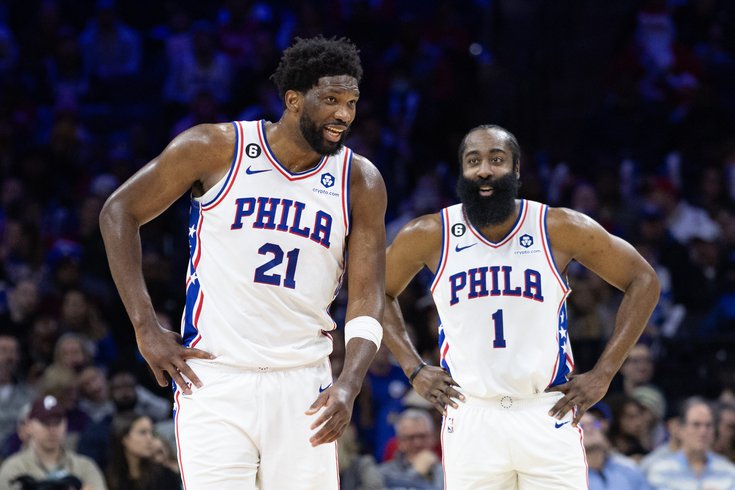 We’re at the end of 2022, the Sixers are infuriating their fans, and Joel Embiid is scoring a million points per game. So, it’s the same as it ever was, with everyone hoping for the Sixers to prove them wrong in 2023. One of these years, they might just do it.

In the spirit of the new year, let’s go through some resolutions for the regular (or fringe) members of the Sixers’ rotation.

I wanted to present these three as a united front, because I believe this is a problem they are all responsible for figuring out. We can debate how much to blame each of them and how much responsibility they have to get this right, but these are the guys at the center of Philadelphia’s late-game execution.

The public is split into their factions on this one. Joel Embiid has never been an elite closer! James Harden has a long history of failing in big moments! Doc Rivers should be fired into the moon! Whatever the case is, they have to stop letting the offense devolve into a series of possessions where Embiid catches the ball at the elbow with everyone else standing around, or Harden dribbling out the clock and playing hot potato with four seconds on the clock. This group has shown they can run high-level stuff when it matters, but there has to be an active effort to get there.

(Good example of what they can do — Embiid scored the easiest dunk on a lob of his life with three minutes left in their loss to the Wizards, in part because Rivers drew up a great set play out of the timeout. They’re more than capable of doing something other than isolating.)

No excuses, just get it done.

Harris has earned deserved praise for embracing his role as a spot-up shooter this year, and I wouldn’t say he has been outright bad as a defender so much as he has been inconsistent. He’s often a good measure of where the team is at, his unfocused, unaware possessions in sync with the rest of the group.

They need him to be dialed in more often than he has been, both because it’s useful in the short-term and critical in the long-term. P.J. Tucker will still probably be the guy to take top assignments when it matters, but if the Sixers want to try to play three-guard lineups more often, that sort of rests on Harris being able to be the main defender on high-end wings. He has shown the ability to make great players work, but they need it on a more consistent basis, and they need his off-ball attentiveness to be A+.

Maxey did not look great in his first game back from injury, and his replacement in the starting lineup has helped tie things together for Philadelphia. The task in front of Maxey is simple — play so well in the weeks ahead that the brief “Maxey to sixth man” conversation fades immediately, and people feel silly for even bringing it up.

Everyone who follows this team knows what Maxey is capable of, and even after a down stretch from deep during the time Harden was out, he’s still shooting nearly 42 percent from three on the year on high volume. That shooting combined with a pace no one can match separates him from Melton on offense, and gives the Sixers a dynamic threat who can’t be replicated. Stay the course, young man, and things are going to work out fine.

I swear Melton would be averaging an extra 3-4 points per game if he could just make some bunnies in transition. Not only that, the Sixers probably win an extra game or two if he finishes off more chances on fast breaks. So it goes.

P.J. Tucker — Get right physically, get shots up

It’s easy to forget now, but Tucker came out of the gates fairly strong for Philadelphia, shooting the hell out of the ball in October while the offense even ran some plays through him as a screener and roller. What a foreign concept that feels like now, with Tucker almost a complete non-entity on offense the rest of the season.

If he needs nights off, to play fewer minutes, or to simply change his role, the Sixers have to make sure he is ready to go for the stretch run. They can’t afford for him to psych himself out of corner threes, the one shot he has reliably made throughout his career, and that has been far too common over the last two months. Feel good, play good.

People might disagree with grouping these two together, as they have wildly different roles and other concerns to worry about to stick in the rotation. Thybulle’s jumper stands out as perhaps the biggest potential swing skill on the roster, as he would be a mainstay if he could simply should average or better on corner jumpers.

But both of these guys need to stop committing dumb, over-aggressive fouls to stick in the rotation. Clean it up, gents.

No real complaints to be made about Shake on the offensive end this year. He has rediscovered his shooting touch, served as a competent starter in their run without Harden, and settled into a role as a regular rotation guy who is comfortable next to basically all of their guards. Huge win for him and the team, honestly.

The next step is figuring out a way to impact the game on defense. I think you’ve seen some moments where his long wingspan has bothered teams at the top of a zone, with Milton dissuading people from throwing passes in his general area. But the Sixers aren’t always going to be able to live in zone just to justify getting him on the floor, so he’ll need to use pre-game prep to get ready for different assignments.

(Another area of importance? Rebounding. That wingspan could also be used to pluck an extra rebound or two down, and I thought he did a good job of scrapping for 50/50 balls in November. The little things matter most for the players with smaller roles.)

I said before the year that I thought House would be the most divisive player for fans, though I think that hasn’t been true so far as a result of him being mostly bad. You can see the outlines of a useful player, with House offering credible defense across a variety of assignments, but he has been the definition of a wild card this year. He is Forrest Gump’s quip about a box of chocolates in the form of a human being.

If House could tone it down about 10 percent, maybe even less, there’s a two-way guy who can help solidify the bench in there. But I think it’s more likely you just have to live with the wild swings back and forth and hope that he hits a stepback three or two every night. Chaos reigns.

Montrezl Harrell — Energy on both ends

He may have the reputation of an energy guy, but I think you mostly see that on the offensive end of the floor. There’s more merit to playing him than I tend to give him credit for, as Harrell is a guy you can ask to self-create on units where there’s not much creation on the floor otherwise. But he has definitely declined on offense, and that means he must bring value elsewhere.

For me, that’s a (relatively) simple task. He can’t make himself bigger, but he can commit himself to the dirty work on defense, from boxing out to calling out switches and correctly reading the floor on the back end. He’s going to lose some matchups for reasons that are not his fault, but he has to make sure that he’s giving himself (and the team) the best possible chance to succeed regardless.