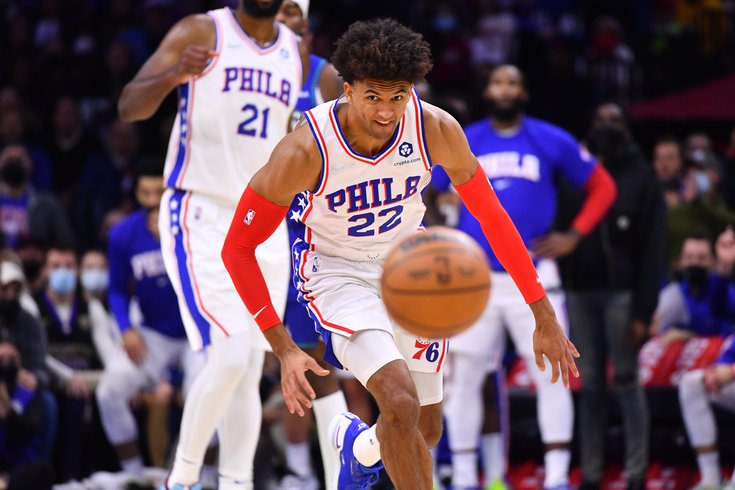 Forty-two points later, Joel Embiid announced his return to the Sixers in a big way against Minnesota, dominating physically in a way that shouldn't have been possible for a guy coming off of a long layoff. But Embiid's barrage of midrange jumpers and free throws were not enough to push the Sixers past the Wolves, and the big fella was not blameless as they struggled to win down the stretch.

Let's walk back through this one.

After missing nine games thanks to a bout with COVID that put him the NBA's health and safety protocols, Embiid made a lot of people forget he had dealt with a physical issue. Not many guys are rejoining the lineup and immediately dropping 42 points, even if they have extra minutes in double overtime to make it happen. And Embiid, who is often more of a first-half player, looked great physically deep in this game, scoring 32 of his points after halftime.

You would be forgiven for forgetting about the COVID thing after watching him play. But Embiid, who once showed up in a hazmat suit to fly to the Orlando bubble, did not have a symptom-free experience.

"It hasn't been good. That jawn hit me hard, and I really thought I wasn't going to make it. It was that bad. I'm just thankful to be sitting here," Embiid said. "I'm just glad I got over it and I'm here doing what I love."

"The first time I went up and down was probably two days ago. Honestly, I didn't think I was going to play tonight after the workout last night. Really couldn't go up and down more than three times, so I guess to me it's a miracle I even played this many minutes."

Embiid, who said he dealt with breathing issues, headaches, and other issues before finally coming out of it, does tend to have a flair for the dramatic, and he smiled at reporters as he claimed he feared death. But even if you think he's stretching the truth about the illness, Embiid ended up playing over 45 minutes in Philly's game vs. Minnesota, a workload that once would have seemed unfathomable even for a healthy Embiid. Throwing him back into the mixer and immediately demanding that much out of him is suboptimal, to say the least.

A mostly-healthy Sixers team should not need Embiid's best (or perhaps even Embiid at all) in order to beat the woeful Orlando Magic on Monday night, so they'll more than likely be able to scale it back immediately. But pushing him to the limit and still losing anyway stings.

MORE: Embiid's 42 points not enough as Sixers fall to Wolves in 2OT

Dislike: Failing to close it out

It is worth noting, of course, that Embiid was not blameless in the loss. He was feeling himself on offense late in this one, canning a series of insane jumpers over backup center Naz Reid, but the Sixers squandered several opportunities to put this game on ice.

The play that will haunt Philadelphia after this one is the Tyrese Maxey turnover with the double-overtime clock winding down and the Sixers up one. A made shot from the Sixers on this possession sets you up so that triple-overtime is the worst-case scenario on the ensuing Wolves possession. Even a miss late in the clock here would have allowed Philly to get set on defense to try to get one stop and the win:

Instead, they flubbed it. But there was a silver lining after the game — as Tyrese Maxey spoke about what went wrong on the play, Embiid stepped in to absorb blame for his new point guard.

"It was on me, I was supposed to kind of roll and I popped, so it made his angle a little harder to throw that pass," Embiid said. "Next time, we're definitely going to do a better job."

It's the sort of pick-me-up his young guard needed in that moment, clearly a lot less bubbly than he is on an average night after a game. And beyond being a good bit of leadership from Embiid, he's also probably correct.

They don't exactly have to go digging through tape to find an example of what Embiid means. Earlier in double-overtime, the Sixers set up the same way — pick-and-roll for Maxey-Embiid, shooters in each corner around them — save for where the shooters were stacked in each play. Embiid's change in positioning is subtle, but a few steps forward are enough to ease the burden on Maxey and lead to a successful possession:

To bring the best out of Maxey, Embiid is going to have to show more of this throughout games but especially in crunch time. It seemed telling that they force-fed a ton of pick-and-rolls involving these two, trying to expedite the development process in the big man's first game back.

As for the last shot, Embiid might have been able to hit Seth Curry at some point before he forced up a doomed shot late. But if you go frame-by-frame in the replay, the only time where Curry is truly open with no one there to close is at a point in the clock where he might not have even gotten a shot up if Embiid threw him the ball. I wasn't the only person who saw it that way, though we can agree to disagree if you think he should have dumped it off anyway:

Little details are vital when running out of bounds plays. Nieng needed to cut immediately,as most plays would call for. His delay allows his man to be in the way of a pass to an incredibly wide open Seth Curry,and Embiid then probably doesnt have time to get it to him for a shot pic.twitter.com/8HaQCvxaKL

There were a couple of turnovers from Embiid late, but I honestly think details like these are more noteworthy than the big man's elbow grazing Reid's face and a turnover out of a double that D'Angelo Russell may very well have touched last. I think anyone looking to go overboard on Embiid specifically for late-game execution in this one is just out looking to cause trouble, frankly.

MORE: The current state of Ben Simmons trade talks and what Sixers want if they move him

All of those issues might have faded from view if Danny Green was available to play as much as he wanted. Still working back slowly from a hamstring issue, Green only played about 22 minutes off the bench. But those 22 minutes were as good as it gets for him, and he did one thing that most people would have guessed would happen if they just used simple reasoning skills.

"I thought Danny spread the floor for us," Doc Rivers said Saturday. "We used his minutes up so we couldn't put him back in. But he was a big help, for sure."

No kidding. Once Green was on the floor with the starters, lanes started to open up for the Sixers, creating paths to the basket for drivers and opportunities for Embiid on the low block where he wasn't being constantly hounded.

Then there's the defensive end of the floor, where Green has been up-and-down to start the year mostly because he's constantly being asked to chase top assignments all over the floor. What you get from Green on defense is not elite lockdown defense or Thybulle-esque chaos in passing lanes, but sound, subtle work that ultimately puts him in a position to make a play without compromising their structure. Take this steal, for instance, where Green is constantly swiveling and tracking the play until the moment there's a cross-court pass, and he's able to pick it off without needing to leave Anthony Edwards until the last possible moment.

Green makes this team better, and that was abundantly clear on Saturday, as Philly outscored the Wolves by 16 points in the third quarter when they had Green on the floor.

Dislike: Matisse Thybulle with the starters

Thybulle starting for the Sixers is something many fans have dreamed about in recent years, but especially this season, with their top perimeter defender in semi-exodus. Put him with the shooting and skill they have in the starting/closing group, they'll tell you, and his warts won't matter too much.

A message from the late, great Charlie Murphy:


The available data for either this year's starters or the lineup with Thybulle in Green's place is limited, but one is not like the other. According to Cleaning the Glass, the Sixers have outscored opponents by over 17 points per 100 possessions with Embiid-Harris-Green-Curry-Maxey on the floor together, and they get absolutely blasted with Thybulle in that spot. The Sixers have scored just 90 points per 100 possessions with that group so far this season, a number worse than the worst team offenses of all time.

We can point out that Thybulle is a willing outside shooter who has some games where he comes out on the positive end without obscuring the truth. When push comes to shove, he's a guy teams will leave unguarded to send pressure at other players, Embiid being the most important guy in that respect. You are what other teams say you are when they defend you, and Thybulle is ignored.

The Wolves felt comfortable enough ignoring Thybulle that they were doubling Embiid whether he had the ball or not. Chalk some of that up to the fear Embiid puts in teams, but a whole lot of it up to suboptimal lineup choices.

Not everything Rivers did on Saturday night was bad. In fact, there was an inspired second-half choice — moving Embiid off of Karl-Anthony Towns at times, using Embiid as a sagging rim protector against guys they didn't fear as shooters. It's a strategy that has worked for the team in the past (including in playoff games pre-Rivers), and it helped get them back in this game.

But Rivers is also the guy throwing out lineups like the one that didn't work, leaving Thybulle in the game in a situation where the team needs a three, rolling with Andre Drummond after it's abundantly clear he is sleepwalking through a game, and so forth. Their final ATO was brutal. And while Rivers deserves a lot of credit for keeping this group together in absurd circumstances to start the year, the tactical adjustments and nuances still evade him a decent amount of the time.

They are going to need to turn more of these close games into victories, regardless of how banged up they are or aren't. Their coach can help them get there by winning on the margins and setting the team up for success. Saturday night, Rivers wasn't on his game.