'Sometimes you gotta have fun' 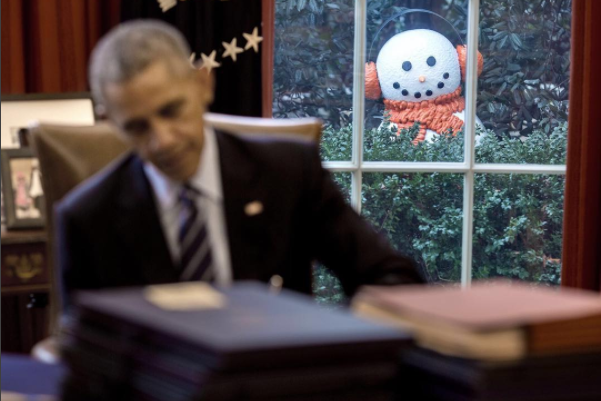 We could all use a little holiday cheer following this year’s tense presidential election.

President Barack Obama’s staff apparently gets this. On Saturday, White House staff photographer Peter Souza shared some photos on Instagram showing life-sized snowmen peeping on the president for some festive fun in the midst of the frenzy.

In the first picture, the president appears busy at work sitting at his desk in the Oval Office (signing some end-of-year bills, as Souza explains) while a snowman decoration is seen peering through the window over his shoulder.

As Souza explains in the post, the positioning of the snowman and his friends was part of an elaborate White House prank aimed at Obama.

"Sometimes you gotta have fun," Souza writes. "For the past three weeks, there have been four snowmen on display in the Rose Garden (see photo in earlier post). We've been joking that we should move the snowmen a few feet closer to the Oval Office every day to see if anyone noticed. Then we realized the snowmen were too heavy to easily lift. But finally this morning before the President came to the office, some helpful staff--I won't say who--moved all the snowmen so each one was peeking through a different window into the Oval."