Steve Harbaugh asks visitors to donate to Toys for Tots 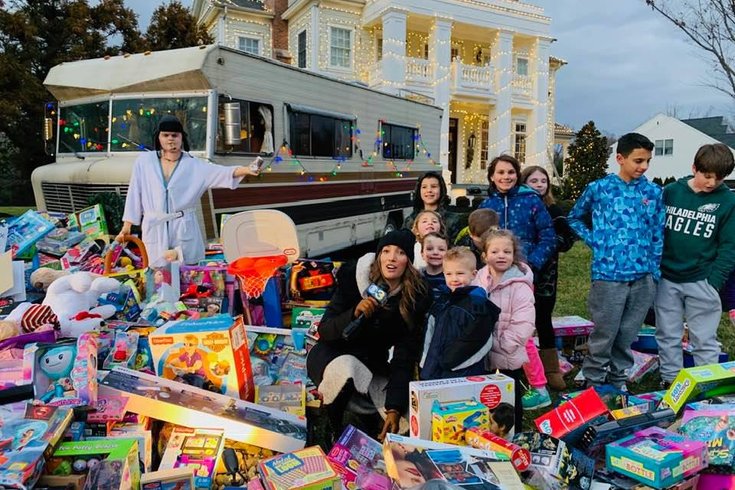 One family in Mickleton, Gloucester County, has recreated the entire holiday light display from "National Lampoon's Christmas Vacation" — all in the name of a good cause, of course.

It took Steve Harbaugh just two weeks to deck out his South Jersey house with 7,500 lights, just like Chevy Chase's Clark Griswold did in the 1989 film.

But it doesn't stop there. The display also includes an RV, a moving dummy of Cousin Eddie "emptying the sh*tter" and a desperate Clark hanging from the roof.

But borne of the interest for the display and the family's desire to give back, the RV has become more of a storage facility for the Harbaugh's. The family has partnered with the local Toys for Tots and is asking visitors who enjoy the display to donate an unwrapped toy.

NJ.com reported 100 toys were being donated per night in exchange for glimpses at their home and chances to take a couple of photos. The RV has already had to be emptied once at the start of the month.

According to Harbaugh's Facebook, more than 2,500 toys have been collected as of Dec. 17.

The project has generated quite the local buzz from the media and neighbors.

"It's funny, (neighbors) all call me Clark and they tell me to turn my lights out so they can go to sleep," Harbaugh told NJ.com.

Clearly, the family are fans of the Griswolds. Even Aunt Bethany.

If you're interested, you can still bring an unwrapped toy to donate to the cause. Head on over to 503 Legends Court in Mickleton before Christmas and throw it in the RV.