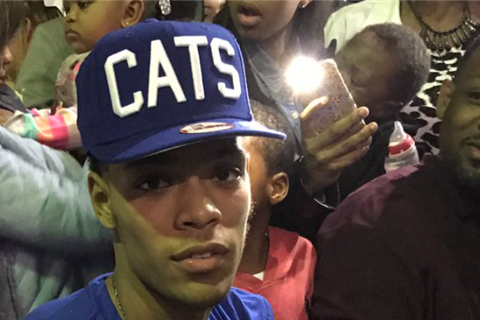 Quade Green is a Kentucky Wildcat.

If you haven’t heard of Neumann-Goretti’s Quade Green, he is one of the most highly rated high school basketball players that Philadelphia has produced in a while. Green is ranked 22nd and 23rd in the entire Class of 2017 by ESPN and Rivals, respectively.

So, that meant a lot of scholarship offers. And on Saturday night, at a midnight madness type event to kick off N-G’s basketball season, Green announced that he will play at the University of Kentucky over Syracuse:

As is always the case at Kentucky, Green will join what is already a loaded recruiting class.

“Coach Cal has been honest with me,” Green said after his announcement. “He told me to come in and play, and that I was gonna be the starting point guard for the upcoming team. And after that I decided that it was the best option I had.”

With a big-time NBA prospect (De’Aaron Fox) running the point for UK this year, it’s very plausible that the starting spot opens up next year. Regardless of how everything shakes out, Green going to Kentucky is a huge accomplishment for both him personally and the Neumann-Goretti program.