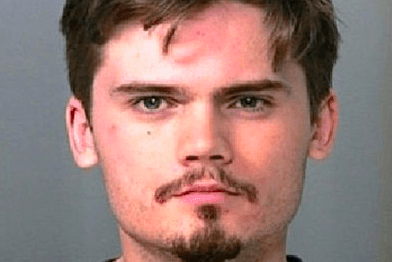 Jake Long, 26, pictured after arrest for reckless driving and failing to stop for police.

The force must still be strong with the former child star who played Anakin Skywalker in 1999's 'Star Wars Episode One: The Phantom Menace.'

Behind the wheel, anyway. According to the Associated Press, actor Jake Lloyd, 26, clocked over 100 m.p.h while evading police in South Carolina on Wednesday.

After refusing to stop for police, Lloyd set off a chase that lasted more than 25 miles before he exited Interstate 95, rammed through a fence, and continued speeding down local streets until arriving at a wooded dead end. He proceeded to hit a few trees before surrendering to police.

Though Long initially gave a fake name, Jake Broadbent, authorities confirmed through a former talent agent that the suspect was in fact Jake Lloyd. He was charged with failing to stop for officers and reckless driving.

Lloyd was 10 at the time of his 'Star Wars' role and also played the son of Arnold Schwarzenegger's son in 'Jingle All the Way.'

As of Sunday, Lloyd remained in jail and had not posted bond, according to Sgt. Kyle Strickland of Collation County.