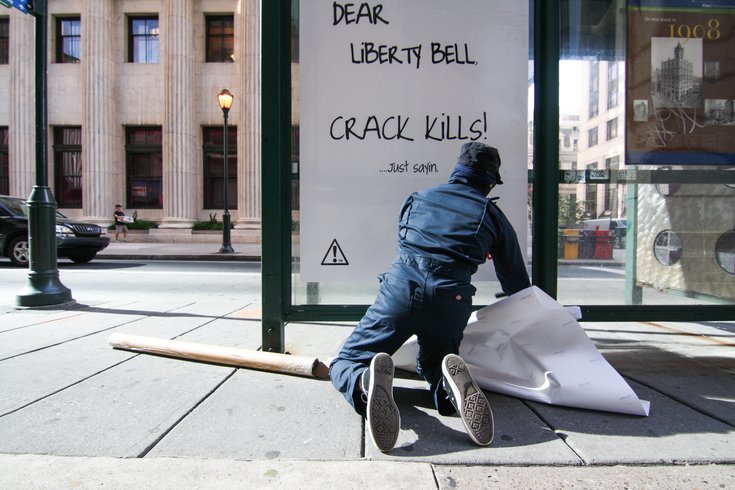 Kid Hazo applies a "With Love, Philadelphia" parody to a city bus shelter.

Over the past five years, Conrad Benner's blog StreetsDept.com has become a staple of the Philadelphia arts scene by passionately documenting the area's street art and graffiti community. In celebration of a half-decade that has seen his work featured by The Guardian, Time Magazine, Instagram and Mashable, Benner is staging a sort of greatest hits exhibit at Paradigm Gallery + Studio in Queen Village.

Ten artists who have helped shape Streets Dept. will display a mix of new and old work in #StreetsDeptTurns5 Friday, Jan. 22 through Saturday, Feb. 20. The lineup is a who's who of both internationally recognized and locally beloved street artists: NoseGo, Kid Hazo, Old Broads, Ishknits, Joe Boruchow, Bines, Harlequinade, CERA, Amberella and NDA.

"I wanted it to feel like what my blog has looked like over the past five years," Benner said ahead of the exhibit's opening. "It’s 10 artists [who] have not only made my blog really interesting to look at, not to mention successful – I wouldn’t have a blog without great content and these guys and ladies are the content producers, really – but also energized and excited about the street art scene in Philadelphia.

"In my opinion, we have one of the best street art/graffiti scenes in the country and that is a direct result of the work of these people." 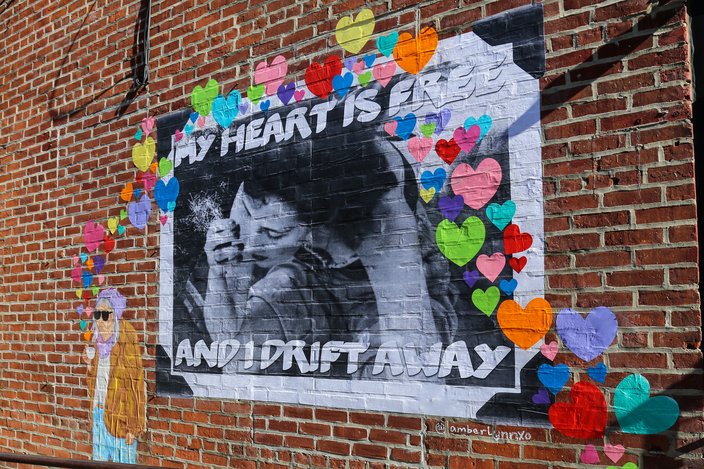 The participating artists are not only representative of Streets Dept, but they expand the definition of street art itself beyond the spray-paint-in-hand taggers of old. Their favorite media run the gamut from traditional methods like wheat pastes and stickers to fiber arts and public installations.

"I started photographing wheat pastes and stickers and then Ishknits popped on the scene and yarn bombing was a thing," Benner said of the genre's progress. "A few years later I get an email from a person named Kid Hazo that’s doing sign installations. So it’s constantly evolving. I don’t know what to expect."

This continual upending of expectations isn't going anywhere, anytime soon, according to Benner -- at least in Philadelphia. As development across the city continues and abandoned buildings, so often used by street artists to bring their work to the public, are torn down and replaced, they'll have to get more creative. 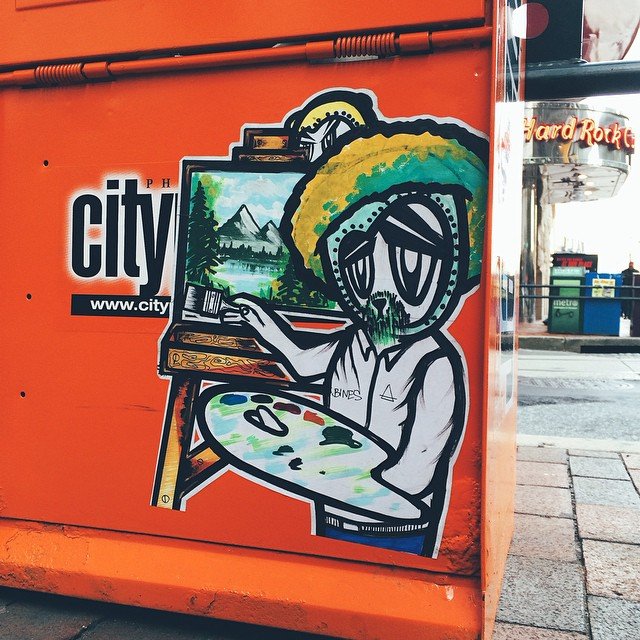 "Typically the people I talk about on my blog are not people that do stuff on homes or private businesses; they’re very respectful to the community," Benner said. "So as more of these blank canvases sort of disappear as these abandoned structures disappear, I imagine that the artist community here in Philly will react by not doing less work, or certainly not doing it on people's private property, but perhaps by being a little craftier and more along the lines of what Kid Hazo’s doing or Ishknits, where they do installations that certainly don’t harm the subject it’s on, but definitely make a huge impact."

As Streets Dept enters the next phase of its life, Benner predicts that this type of public installation work will be the next frontier. Light installations, as he's documented, have popped up in the past - perhaps more are on the horizon or digital media might make a bigger entrance. 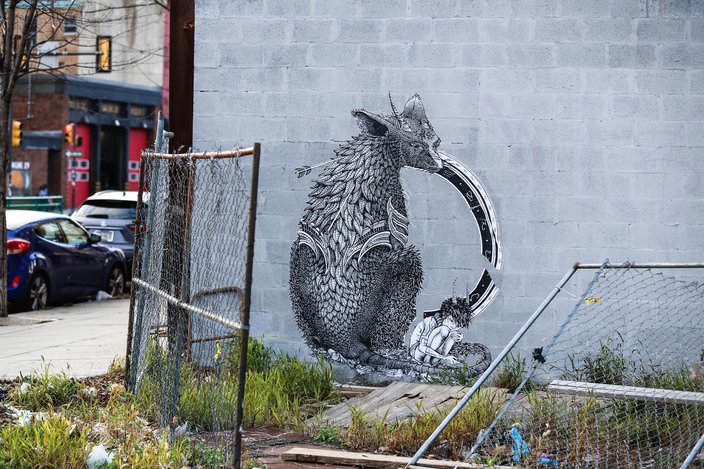 Artwork by Harlequinade at Girard Avenue and Orianna Street.

But for now, the city has its current, solid-state work to celebrate. As if the prospect of new art wasn't enticing enough, all of the artists featured in the upcoming Paradigm show will have something for sale, many of them for the first time.

After the opening reception at 5:30 p.m. Jan. 22, the artists and curators in attendance will make their way to Tattooed Mom on South Street, itself a bastion of street artist support, at 10 p.m. for a bit of an after-party.

Benner couldn't say much about what will or won't be on display at the show, but he did give us one teaser:

"It won’t all be on the walls. There’s one very exciting piece that – I don’t want to give it away – but it will blow people’s minds away and will show this artist’s work in a completely new light."