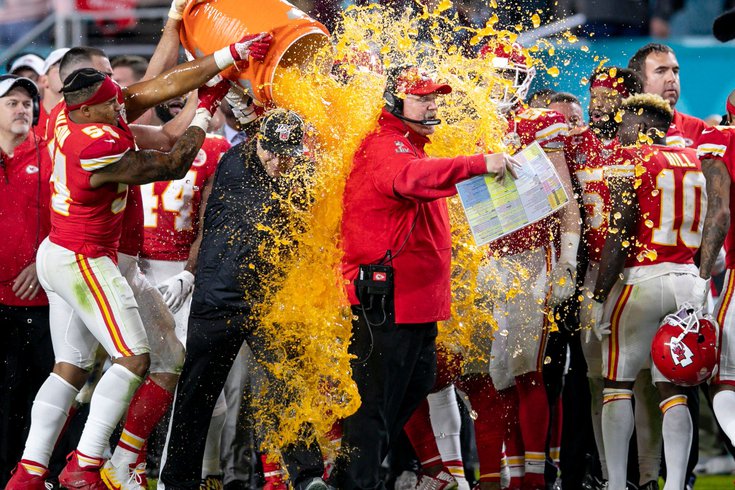 Super Bowl Sunday is here, and *breaking news alert* the Philadelphia Eagles will not be participating. For the gambling enthusiasts, my Super Bowl pick is below. As always, spreads are courtesy of the consensus odds at TheLines.com.

Chiefs (-3) vs. Buccaneers: After picking the Chiefs in every one of their games this year, I'm still mad at myself for picking the Bills to beat them in the AFC Championship Game a week ago, on the premise that Patrick Mahomes might be slowed by turf toe. Derp.

Mahomes is the best player in the world, and he is surrounded by insane speed on offense, most importantly Tyreek Hill on the outside, and Travis Kelce working the middle of the field. Oh, and Andy Reid is maybe the best offensive schemer / play caller in the NFL these days.

In the six playoff games that Mahomes has started and finished, the Chiefs have scored at least 31 points in all of them, averaging 36.2 points per game:

The only stellar defense they faced in those six games was the 49ers, and for a while the 49ers had the Chiefs' number. But once the Chiefs figured them out, they exploded in the fourth quarter and turned what was looking like another colossal Reid disappointment into an 11-point win. They just seem impossible to keep down for a full 60 minutes.

I'm not going to overthink this. The Bucs are obviously a very good team, with a legitimate defense, and a lot of good players on offense. And yet, they're kind of an average Super Bowl participant, even with Tom Brady at quarterback. Ultimately, unless the Bucs are somehow able to knock Mahomes out of the game, the Chiefs' offense just feels unstoppable.

These are all via TheLines.com as well.

• Super Bowl MVP: The clear favorite here is Mahomes, of course, with Brady right behind him. If Mahomes wins it, the payout is minimal. Last year, Damien Williams (17-104-1 rushing, 4-29-1 receiving) should have won it, but they gave it to Mahomes. So don't even bother.

Otherwise, I like three unders. To note, betting the under on these types of props sucks, because you have to sweat out the whole game hoping something doesn't happen. It's much more fun rooting for something to happen, and celebrating if/when it does. Of course, Vegas knows this, and slants the odds accordingly. But if you actually prefer winning money, the unders on these props are generally the better buys.

• Tyreek Hill, total rushing yards, over/under 5.5 yards: Hill had at least 5 rushing yards in 7 of 17 games this season, plus the Bucs have the best rushing defense in the NFL. Take the under.

• Travis Kelce, longest reception, over under 25.5 yards: Again, in 7 of 17 games, Kelce had at least one reception of 26 yards or more. Take the under.

• Rob Gronkowski, over/under, 2.5 receptions: While Gronk did have 6 catches for 106 yards against the Chiefs earlier this season, he has had two or fewer receptions in five straight games. He's just not that big a part of the Bucs' offense. Under.

And here are the odds for each color:

With no accompanying analysis whatsoever, it feels like a yellow year to me.