Surfside crisis response dog from Philly gets hurt on the job, community fundraises for his vet bills

Teddy, a 6-year-old basset hound lab mix, provided emotional support for first responders and families at the scene of the Surfside condo collapse in Florida 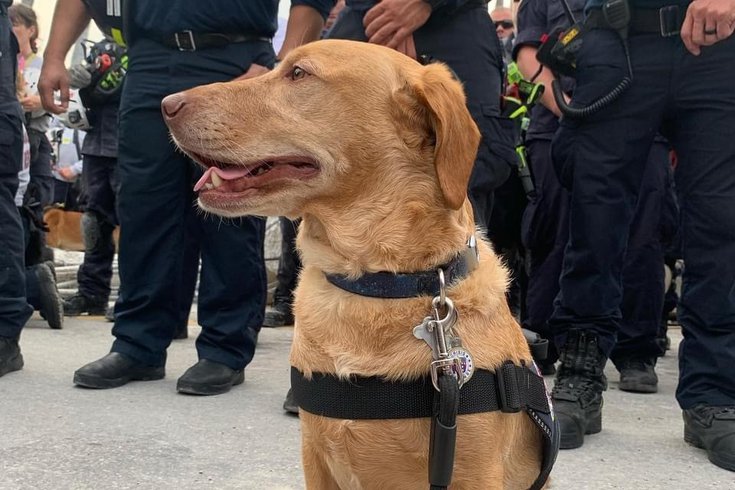 Teddy, a 6-year-old basset hound lab mix, served as a crisis response dog amid the Surfside condo collapse cleanup and rescue efforts earlier this month. He got hurt on the job and the community raised thousands of dollars to get him the care he needs.

Meet Teddy: a crisis response dog from Philadelphia who spent the past three weeks down in Surfside, Fla. bringing smiles to the families and first responders of the condominium collapse.

After Teddy – a 6-year-old basset hound lab mix – got injured while he was out helping the first responders and families at the scene of the horrifying condominium collapse, the community banded together to get him home and help his owners pay for his veterinary bills.

On the morning of July 14, Teddy's owners Sophia Barett and Jake Blouch say he lost the ability to walk. While Teddy was out on the job, he suffered from a possible herniated disc in his spine and potential torn ligaments in his knee, X-rays showed.

Teddy was going to need chiropractic, acupuncture and physical therapy to recover from his injuries, and his owners said they needed financial support to pay for the expenses.

As of July 21, the GoFundMe Barett and Blouch started to help with Teddy's expenses raised more than $46,000.

"It’s not really real to me, an incredible act of generosity. Thought this would never happen, but here we are," Blouch told CBS3.

All of the funds raised will go to Teddy's caretakers for his treatment, and any excess money will go to the "therapy team Teddy belongs to, Crisis Response Canines, a 501c3 in New Jersey," according to the GoFundMe page.

The generosity didn't stop there.

Teddy's owners said a commercial flight back to Philadelphia would have been too uncomfortable for him and they were unsure how to bring him home. After hearing about the dog's situation, the team at Titan Aviation Group reached out and offered Teddy a ride home in style, aboard a 800XP private jet.

"I saw the pics and knew we had to help," Dirk Vander Sterre, owner of Titan Aviation Group, told CBS3.

Vander Sterre and the team at Titan Aviation donated $10,000 to send him home safely.

"If Surfside taught me anything, beauty in humanity, even in dark spots," Barrett said.

Teddy is expected to make a full recovery after completing his treatments.