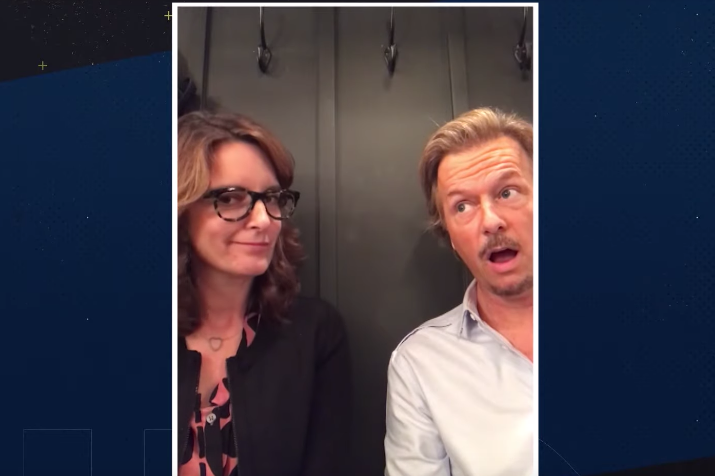 David Spade had a "selfie interview" with the Upper Darby native herself, Tina Fey, on Monday night's episode of "Lights Out," the former 'SNL' cast member's new late night show on Comedy Central.

Tina Fey appeared on "Lights Out with David Spade" on Monday night and the two discussed each other's hair, using Lorne Michaels' bathroom, and Fey's disinterest in ever watching "Top Gun."

In the two-minute clip, Spade explores a variety of topics in his "Selfie Interview" segment with the Upper Darby native, including her Instagram account, which isn't public, and apparently there is no such thing as good lighting in her house. He asks who would play her in a feature film, and she replies, "For a Hallmark movie, it's Meghan Mullally."

MORE: The Bourse announces it will transform into a beer hall for Oktoberfest

There was lots of hair playing, including Fey's concern with her "wig," discussions of the heat outside, and how often Fey uses the word "jenky" — which apparently is a lot.

Spade asks what's the best public bathroom in NYC, the comedy writer replies, "It's not really a public bathroom, but there is a bathroom at 'SNL' that only Lorne is supposed to use." (Uh-oh.)

The host then asked what is one movie she's never seen that everyone else has seen, and she quickly responded with "Top Gun." She told a story about a former writer of "30 Rock" gifting her a DVD of the film after she said she had never seen it. "She gave it to me at Christmas, and I was like 'Oh you miss understood me, I don't want to see it.' ''