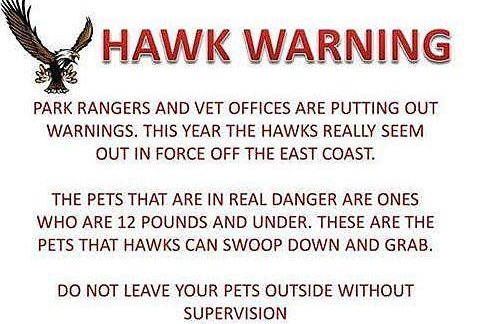 Toms River is by no means a small place. The Ocean County township has somewhere around 90,000 residents, according to the Census.

However, you probably wouldn't expect a simple warning from the town, telling residents to protect their pets, to reach thousands of people across the country and set off an intense debate about wildlife. Christine Newman, operations officer for the township's office of emergency management, has since learned never to underestimate the snowball effect of social media.

It all started last week when Newman returned home from work and took her dog out for a walk. She noticed two hawks circling overhead, and as she was walking down the sidewalk, a third hawk "came right at my eye level and tried to get my dog," Newman told PhillyVoice.

Newman grabbed her dog Snowball, who weighs all of seven pounds, and ran inside. Shaken from the experience, she decided to use her platform as moderator of the office's Facebook page to give Toms River residents a heads up – literally.

"Please, if you have a small animal (dog, cat, rabbit, whatever) do not leave them outside unattended!!" Newman wrote in a Facebook post on the office's page on Thursday. "Keep an eye on the sky and bring them indoors if you notice hawks flying low."

What happened next was a classic case of a seemingly innocuous post going viral. The warning from the Toms River Office of Emergency Management page has since gotten more than 18,000 shares on Facebook from users in Florida, Georgia, Connecticut, Arizona and elsewhere.

It also sparked arguments and anger. Some questioned whether a hawk would even be able to carry off a dog the size of Snowball.

"People said [the hawks] couldn’t carry [pets] off. But this actually happened to me," Newman said.

Others left comments that implied violent measures should be taken if a hawk tries to snatch a pet, causing other Facebook users to criticize Newman's original post even though she never suggested hurting the birds in her original post.

"I came off as someone who was against wildlife," Newman said. "There were people posting on there with bow and arrow emojis."

To clear things up, Newman put up a second post later that day, noting that she could "barely keep up with the comments." She wrote:

Anyway, what I posted is a public service announcement for everyone to be on the lookout and keep your pets SAFE!!! I am not advocating for any harm to wildlife!! I CANNOT and WILL NOT. The hawks are nesting, searching for food, and doing their own hawky thing. My advice is to keep your eyes OPEN and if the hawks seem to be taking a special interest in your pet, take them indoors. I will also say, please do not leave them outdoors unattended if they are small. No fighting, please!!!

To be clear, there is legitimacy to Newman's original warning. An article on ShoreNewsToday about the Toms River Facebook post cites information from Hawks Aloft, Inc., an avian research and conservation organization, that says large birds of prey "can attack and kill small pets."

"We recommend that for animals less than 15 pounds, that you supervise all of their outdoor activities and that cats be kept indoors at all times," the organization told ShoreNewsToday. "Regardless of if your small pet is accompanied with a larger dog, or if it is sporting a kevlar or reflective vest – your pet is still fair game for predators like hawks, owls, and coyotes.”

But harming the birds of prey in response is not an option, the article warned. If you do, you could face charges if the species is protected or endangered.

Newman in no way expected her post to get the attention it did. But she's taking advantage of it to boost the office's online presence and has since gotten the its Facebook page to 4,000 likes at her boss' request.

"My boss challenged with me with my newfound fame," she said with a laugh.