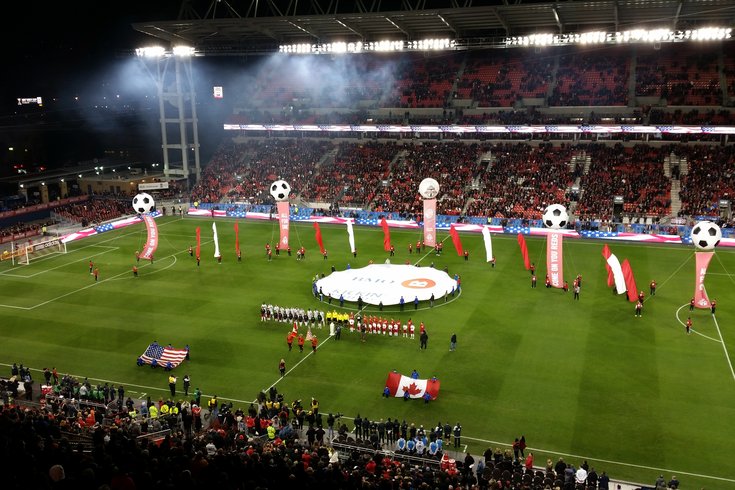 The Philadelphia Union season ended on Wednesday night with a 3-1 playoff loss in Toronto.

TORONTO – It's said that those who do not learn from the past are doomed to repeat it.

That's how we will remember the 2016 Philadelphia Union, a team that started so well and finished so poorly.

The Union crashed out of the postseason as 3 to 1 losers in Toronto.

It was a game that started brightly for the Union, who showed purpose and energy going forward. Tranquillo Barnetta and C.J. Sapong were on the ball early and often, and this did not look like the team that stumbled through October.

But all of that momentum was forfeit with the concession of a ghastly goal, beginning with a shanked Ken Tribbett clearance attempt and an uncharacteristic moment of indecision from all-star goalkeeper Andre Blake.

"I couldn't have asked for a better start from the team," said midfielder Alejandro Bedoya. "That's what we talked about, getting on the front foot and playing in their end, just being aggressive and showing that playoff intensity. I think it was a bit too frantic in the first half, but that's going to happen with the emotions. Then we gave up a cheap goal, which we talked about from the last game, too. We just can't seem to get away from giving up cheap, easy goals."

The second half started much like the first, with the Union regrouping during the intermission. They pushed with a renewed commitment and drive.

Then, just a few minutes later, another cheap goal, this time on a corner kick. With two players leaving their marks, the ball bounced free after a collision in the box and Jonathan Osorio was able to fire home from point blank range as several Union players failed to react.

"Three kind of broken plays," said Curtin of the conceded goals. "I thought the first 15 minutes we really pushed the tempo of the game and were up for it, and I was excited by that. Then, literally a few seconds later, we have a missed clearance, where it goes up in the air, Andre kind of half comes, then goes back, and it's a bit of a scramble and Giovinco gets on the end of one. The corner kick goal to start the second half, two guys collide and fall down, and Keegan loses Osorio. It's difficult again, moments you learn from and those are the key, critical moments."

Philly pulled a goal back in the 73rd minute off a corner kick, with Tribbett, Richie Marquez, and Ilsinho all winning aerial duels to keep the ball alive.

Bedoya was in the right place at the right time to cut the lead in half.

Bedoya pulls one back for Philly! Game on! 2-1!!! pic.twitter.com/awpOH5qDLZ

The Union continued to threaten and pulled Keegan Rosenberry to add another attacker for the final ten minutes.

But the equalizer never came, and the defensive issues reared their ugly head again, this time with Tribbett unable to clear a knocked down ball before Jozy Altidore was able to round him and fire home Toronto's third goal.

Stick a fork in this one. Everything that's killed the Union in 2016 has shown up in this game. #TORvPHI

As the Union finished winless in September and October, some players didn't seem to think there was one specific issue that caused the dip in form.

Chris Pontius was not one of them.

"As a team, giving up goals," said Pontius of the reason for the slide. "And that's every man, I'm not talking about just the defense, I'm talking about forwards and on. We gave up too many goals. If you look at the beginning of the year, we were pretty solid. Once again, it's not about anyone on defense, it's about us as a team. It's us pressuring as a group. I think we were a bit more fearless.

"We were a bit more... I don't want to say reckless because that's not the word for it, but we took some chances in pressuring teams and forced them into some very bad turnovers. I think we kind of got away from that a little bit. When you give up goals, you put yourself behind in games, and it's tough to come back."

Tranquillo Barnetta, who played his last game for the Union on Wednesday night, essentially echoed those sentiments.

"It's hard to say because we were still working hard," the midfielder said. "I think maybe in the beginning of year, we were sometimes having a little bit of luck for a couple of points and wins. I don't know why, but in the end, I guess you could say the football Gods weren't on our side. I think we had a lot of tough days, and we made too many individual mistakes. It was sometimes too easy for other teams to score. That's how the other few weeks went. Even then, we had a good performance tonight, and we can't point to somebody or say we have to do something different. We have to be proud and just continue the way we worked this season. I'm confident that this wasn't the last playoff game for this team."