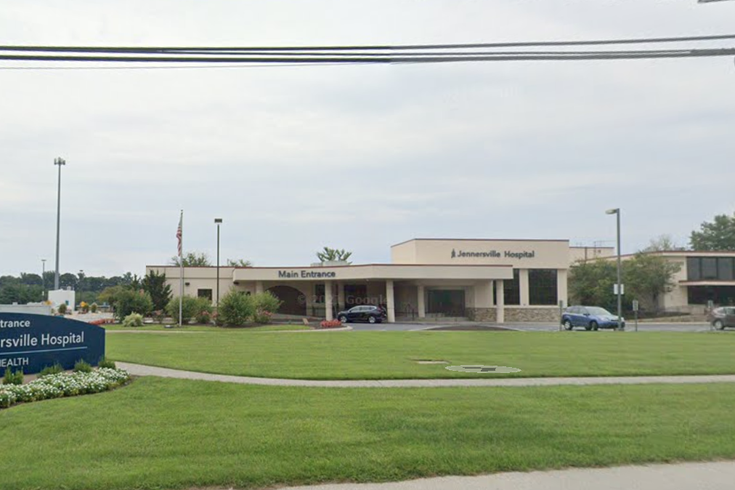 Tower Health originally planned to shut down Jennersville Hospital in West Grove, Chester County by the end of 2021 before finding new ownership to take over the facility.

Both Brandywine and Jennersville hospitals in Chester County appeared to be heading towards closure as Tower Health has begun to shrink its footprint in the Philadelphia region.

But both health care facilities are now being given a second chance and will remain open to patients after all.

The Berks County-based health system has agreed to sell both hospitals to Canyon Atlantic Partners LLC, which will keep both operational as acute care facilities.

Canyon Atlantic Partners will assume control of both hospitals, including all inpatient and outpatient services associated with each facility, on Jan. 1. All staff considered in good standing at both hospitals will be kept on.

Based in Austin, Texas, Canyon Atlantic Partners is a hospital ownership and management organization that specializes in health care operations, finance and resource integration.

"Canyon Atlantic Partners is honored to be chosen to build on the accomplishments of Tower Health and will prioritize working closely with their communities and medical staff to ensure we meet their needs," Canyon Atlantic Partners President and CEO David Kreye said. "We look forward to bringing our substantial experience in acute care hospital turnaround and growth to further elevate the hard work of the excellent medical staff at Brandywine and Jennersville hospitals, and ultimately making an impact with the greater community that they serve."

While Brandywine Hospital in Coatesville was expected to remain within the health system, the facility's long-term future was still being assessed.

The two hospitals lost more than $42 million in the fiscal year that ended this past June and accounted for just 9% of Tower Health's inpatient admissions between April and June 2021, according to the Inquirer.

But Tower Health's plans to close Jennersville Hospital and the uncertain future of Brandywine Hospital drew ridicule from some in the local community, who argued that shutting down both facilities would leave residents without convenient access to health care, according to the Reading Eagle.

"We listened to the community and redoubled our efforts to keep Jennersville and Brandywine hospitals open," Tower Health President and CEO Sue Perrotty said. "We are deeply grateful for the commitment of our staff, who showed steadfast dedication to our patients throughout this process. We have a lot of hard work ahead but believe this transaction represents the best opportunity for the two hospitals."

Tower Health's massive reorganization will leave the health system with half as many hospitals in the Philadelphia region.

Tower Health agreed in September to sell Chestnut Hill Hospital and nearly 20 urgent care centers in the region to Trinity Health Mid-Atlantic. The sale is expected to take several months to complete.

Phoenixville Hospital in Chester County and Pottstown Hospital in Montgomery County will not be impacted by Tower Health's restructure. St. Christopher's Hospital for Children in Philadelphia remains within the Tower Health network, but its long-term future is still being evaluated.

The decision to downsize Tower Health's hospital and urgent care network in the Philly region comes as the health system seeks to become more financially sustainable.

Tower Health has lost more than $658 million over the last two fiscal years, and it wrote off $370 million in value of its hospitals earlier this year.