Trump rally that hopes to draw 1,000 to Independence Mall postponed to Sunday 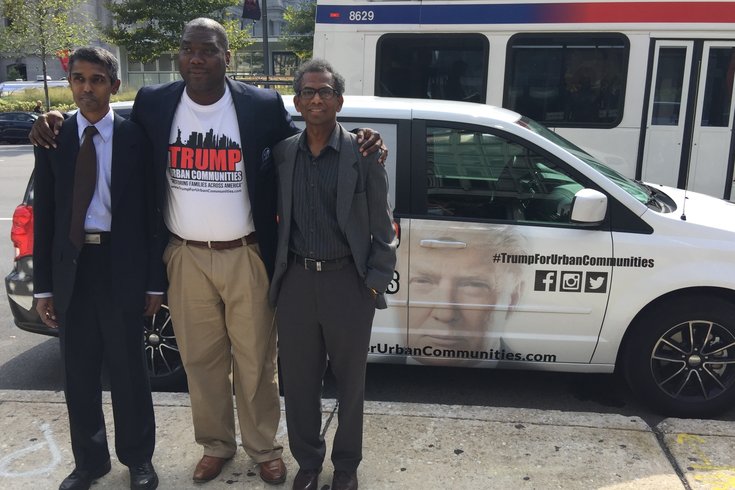 UPDATE, 3:30 p.m. Thursday: The "All American Rally for Trump" has been rescheduled to 1:30 p.m. Sunday instead of its original date set Saturday due to the threat of rain in the Philadelphia area from Hurricane Matthew. The event is still set to take place at the People's Plaza near the Liberty Bell.

On a swath of sidewalk between the Frank Rizzo statue and a minivan decorated with a Donald Trump headshot where a Bernie Sanders photo used to be, a trio of supporters explained what motivated them to organize an “All American Rally for Trump” near the Liberty Bell Sunday.

Bruce Carter – the founder of Black Men for Bernie – said Hindu activists Satya Dosapati and Arvind Kumar took the lead, but he aligned with them through his new group, Trump for Urban Communities.

Citing recent momentum, coupled with “interest of a number of civil-rights groups around the country,” they estimated the 1:30 p.m. event at People’s Plaza could attract as many as 1,000 supporters.

Carter said his motivation was the Democratic party being too reliant on African-American voters while not addressing the issues that impact their communities. For Dosapati and Kumar, it was about Hillary Clinton and the Clinton Foundation causing problems overseas, and an aversion to the “dynasty” that her election could create.

“There’s a message that whether it’s African Americans, blacks, Hindus, Latinos, that they support Trump. We’re supporting a movement, something different,” said Carter, noting that “When I speak for urban communities, I’m talking about the blight across the country that happened under Democratic leadership. I am trying to wake people up to what’s taken place, who you’ve voted for and how we have to do something different to get some different results.”

To Carter, Trump’s real estate background could help address blight in urban communities that developed during an era when African Americans voted primarily for Democrats.

“I completely and wholeheartedly agree with everything he has said because we came as legal immigrants." – Satya Dosapati, All American Rally for Trump organizer, on immigration issue

He fully expects to hear protesters on Saturday – like he heard from a few anti-Trump passersby on Monday – but hopes to sway them toward the Republican candidate. He linked that propensity toward voting blue with “the great bait-and-switch.”

“It’s well noted that in 1964, Lyndon Baines Johnson said if we give these n------ something, we’ll own them for 200 years and they got the Voting Act of 1965,” he said. “All our great leaders – whether it was Martin Luther King, Harriet Tubman, Frederick Douglass, Booker T. Washington, and the list goes on, all those great people were all Republicans. So, the Democrats did the bait-and-switch, and it’s still working. We left one form of slavery, with people putting their life on the line, and entered into a form of political slavery.”

Dosapati spoke about coming to American from southern India some 30 years ago.

“It was for a better opportunity, and to escape corruption and political dynasties. We have children in this country who are seeing it move, very quickly, in the direction of dynasties and unbridled corruption,” he said. “We don’t want to see America turn into another third-world country. It’s not about Republican or Democrat. It’s about ‘do you want a country like that?’ … Between Hillary and Trump, Trump is the better choice.”

He then maintained that “60 to 70 percent” of Indian Americans are supporting Trump, despite data that holds 65 percent of Indian-Americans are registered Democrats, and the youth trend toward voting for Clinton. The Trump campaign has, however, made efforts to court the Asian American vote of late.

After the press conference, Dospati was asked to reconcile support for Trump – and his immigration policies (and rhetoric) – with having emigrated here himself.

“I completely and wholeheartedly agree with everything he has said because we came as legal immigrants. My wife had to stay (behind) for one-and-a-half years before she joined me,” he said of arriving to study chemical engineering and then computer science. “We have no complaints. Everyone has to stand in the line and then come.”

Kumar, who led free-speech protests at the University of Pennsylvania in 2013, then maintained that “the Clintons have made a victim of everybody” – rattling off Libya, Egypt, Syria and Yugoslavia, “where Madeline Albright went to make investments for her hedge fund. This is the kind of people they are.”

It all came back around to dynasties for Dospati, though.

“When we see the Bush dynasty, the Clinton dynasty, or the Clinton Foundation corruption, it rings a bell in us,” he said. “What kind of country do we want to leave for (the children in our community)? Do we want to continue what we came from, and created the same situation? That is why we are here. ... They have a colonial mindset. They have a very unclean record.”

When asked about the perception that Trump would seemingly create an American “royal family” dynamic, Kumar said “that’s speculative. I wouldn’t accuse him of that unless he’s done that. We would fight against that, too, but for now, he’s the one who can actually end the good fortunes of two political fortunes. ... Trump may have his negatives, but in a democracy, we are to select the best we have. That is what it boils down to.”

They both deemed the Nov. 8 election to be a coin flip at this point, though.

"It is possible," said Kumar. "That is why we are here. We want to swing Pennsylvania, and if we can get the momentum here, I think he can win."

The rally starts at 1:30 p.m. Saturday at People's Plaza, the Independence Mall protest zone near Fifth and Market streets.