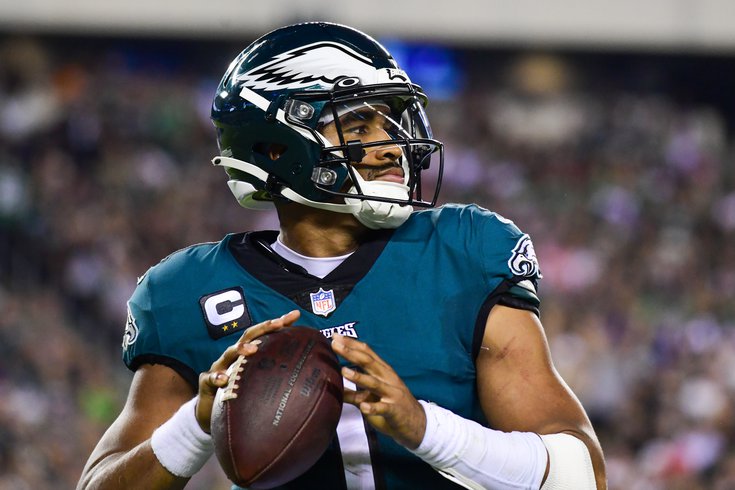 The Eagles are 8-0 for the first time in franchise history.

Because the NFL ruined its 16 game season with a 17th game that no fans asked for, basically they are at the halfway point of the season to reach a perfect 8-0.

Take a moment to breathe that in, the air smell delicious. 8-0. The Eagles deserve to be thought of amongst the elite in the NFL even though the NFC seems to be weaker this year. Ignore Emmanuel Acho’s weird parable hate — why does he always use parables for foolishness anyway?

The remaining schedule isn’t daunting and 15-2 is in play if they listen to their unquestioned 24-year-old leader. Every time the Eagles win, Jalen Hurts points out that he wants more and that the team can do better. He is among the leaders to be NFL MVP and he still always focuses on getting better.

Hurts is not close to being satisfied and likely won’t be until he wins a Super Bowl. There is no proof he will even be happy then. Would anyone be surprised he thinks that Brady’s seven rings is his goal?

I love this about him, and it will make him a legend in this city if he continues this path and each win is adding to his impressive resume.

On the radio this week a couple callers, around all the World Series talk (make that play at first base Rhys), declared this Eagles team the best in franchise history and is a possible dynasty in the making. It is clearly too early to say that, but it shows the faith the city now has in the guy playing the most important position in professional sports.

He is exactly the leader that you would want at the top of any profession, not just a sports franchise. You think he wouldn’t have people hitting quotas in an office job? Buses and trains would always run-on time if Jalen Hurts was in charge. You think your internet is going down at the worst possible moment with Hurts in charge?

We knew he had the intangibles before this year. The fact that he’s a coach’s son and conducts himself like one, the way he handled being benched in the National Championship game with such maturity, and the way his teammates gravitated towards him and away from Carson Wentz the moment he entered the building are all examples.

The question was if his physical tools would catch up to his amazing mental gifts. Going by his standards, he is halfway to proving that he has. He seems to be getting better week to week. And he is willing the Eagles to win.

The more Hurts plays, the better he plays, and his confidence seems to be constantly growing. So far, he has passed for 12 touchdowns to just 2 interceptions (and one lost fumble). Hurts is 6th in the NFL in completion percentage among QB’s who have thrown 100 passes or more at 68.2% according to NFL.com, but that only tells a small part of the story. He is 4th in the NFL in yards per attempt at 8.5 YPA. The Eagles are not running a dink and dunk offense. He is pushing the ball downfield with an efficiency we haven’t seen here in a long time. He has also rushed for six touchdowns. That is tied for the 4th most in the NFL. Again, he is the league MVP at the “halfway” point.

The Eagles just traveled on a short week, had the expected short week hiccups, and still won by double digits. They have not just won every game this year but have led by double digits at some point of every single game. That is a credit to the entire organization, but it is Hurts who is driving the ship and he is keeping them sharp enough to win every single week.

Hurts may not be taking any time to enjoy this, but we should. The Eagles have found their unquestioned franchise quarterback and he could be here for another 15 years. While he is telling his teammates rent is due every day, we have been able to make 12 monthly payments since he’s last lost a regular season game.

There is a real chance he could go a full calendar year without losing in the regular season. The best part is that we know he will do all he can to make sure that he better tomorrow than he is today.