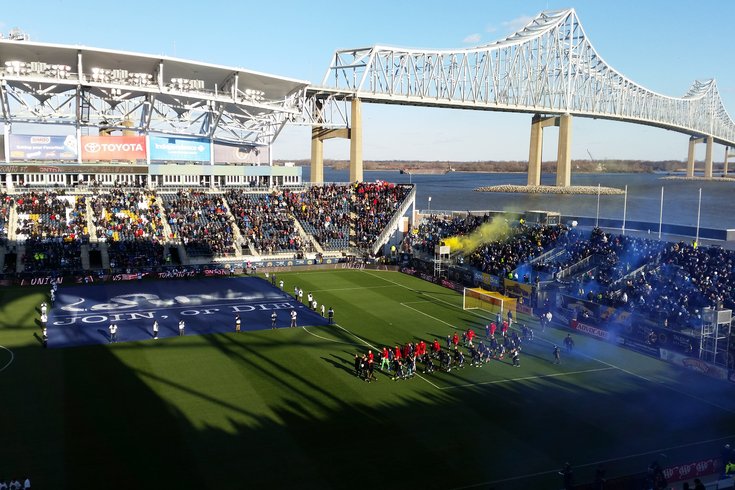 Temperatures hit a low of 21 degrees for the Union home opener, a 2-2 draw against defending Eastern Conference champions Toronto FC.

This was a tale of two penalty kicks in the Philadelphia Union home opener.

Captain Alejandro Bedoya clanked the first one off the underside of the crossbar.

Toronto's Jozy Altidore converted the second after going down rather easily inside the Union box, bracketed by midfielder Derrick Jones on an innocuous set piece opportunity.

Instead of going into halftime with a two-goal lead, the Union settled for a 1-1 stalemate that ended with a 2-2 draw at full time.

"I thought I (had the penalty) but, hey, sh*t happens, whatever," Bedoya said post-game. "It's not the first and last penalty missed. But I apologized to the team. I think, at 2-0, we had them. The way we were playing, it could have been a totally different game. We could have beat them four or five to zero I think. But I'm proud of the guys. I think the team effort today, collectively, was great. The energy we had, I think it was one of the best games we've had since I've been here."

Fabian Herbers earned the penalty when he was clumsily brought down by Nick Hagglund while trying to latch onto a diagonal dead ball.

After Bedoya's miss, Oguchi Onyewu chopped down Sebastian Giovinco on the other end, knocking the Toronto forward out of the game with a thigh bruise and conceding a free kick in the process.

Altidore went down on the resulting service with Jones making a bit of contact inside the box.

"I didn't even see it," Bedoya said. "But knowing him, he tends to go down easily in the box. So we'll just leave it at that. I haven't even seen the replay, but from what I hear it was definitely not a penalty, and that's the first thing I made clear to (referee Mark Geiger), is that I thought it was just a makeup call for them. We'll see."

"I don't know, I don't think so," said Haris Medunjanin of the penalty call. "Altidore is a very good player and he's a strong guy, and then he falls like that. It was a little bit too easy. But, okay, the referee blows the whistle. We also got a penalty from him (in our favor). That's football. You cannot see everything, you know?"

Penalty to Toronto. Hard to see from this view but it's the best we got. #PHIvTOR pic.twitter.com/hN0iZI077K

Head coach Jim Curtin was a little more forthright with his comments on the officiating throughout the game.

"It’s not a penalty," Curtin said. "It’s clear. We’ve seen the video now. Referees make mistakes. I have to watch what I say. You guys saw the video of the play. There’s been a lot of initiatives come forward (from PRO referees). I think you had all of them in one game, to be honest. We’ll see if they actually act on retroactively suspending guys for diving. Now we’ll have that one as well. Grabbing in the box was a big initiative. Not kicking the goalkeeper in the head was another big initiative. I don’t know if it was incidental, but Andre (Blake) gets hit pretty good. And then (there's) the grabbing in the box one, where I think he seemed a little overanxious to call it. The ball is clipped to the back post. There’s no contact and Jozy goes down. I don’t think he gets touched. We’ll see how they look at it and it gets judged."

Those initiatives Curtin is referring to are areas that will be under more scrutiny in 2017. Among those is clutching and grabbing inside the box, which is exactly what happened on the penalty. MLS referees have been instructed to be more vigilant of unnecessary grabbing and impeding, which Bedoya and Curtin say is unavoidable.

"There's always grabbing," said Bedoya. "Watch clips on the corner kicks for any team. When you're man-marking, the point is to not let them get an inch or two by you, so you're always grabbing and whatever. From what I hear, (Jozy) was barely touched, and just went down easily. It was kind of a soft penalty."

"If you’re going to call the clutching in the box – and I warned (MLS and PRO officials) of this when I sat in the meeting – you can call a penalty kick on literally every ball that’s put in the box," Curtin added. "Every one, someone’s grabbing and someone’s holding. With it being an initiative now, you know they’re going to randomly just be calling them. And they’re going to be overacting in the early stages similar to last year with the red cards. Anyone who left their feet last year at the beginning of the season got a red card. And it’s hard. It is a hard job they have. It’s not one I ever want to do. But it is tough because our guys empty their tanks for 90 minutes and they get a point out of it and I think it should’ve been three."