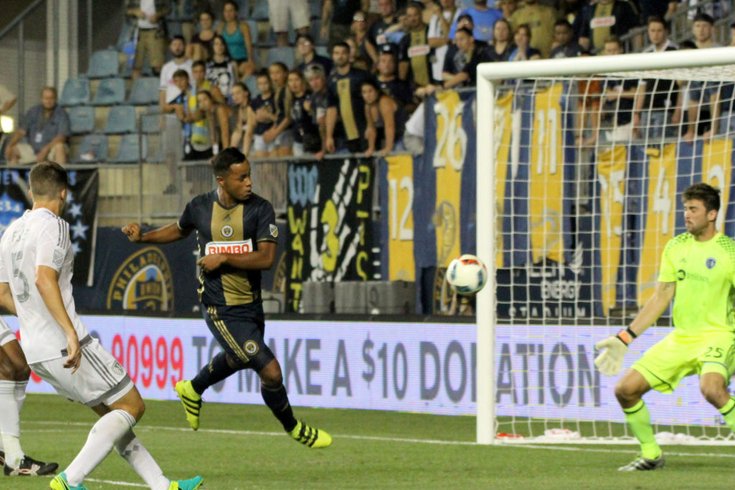 Roland Alberg was perfect from the penalty spot last season, converting all four of his attempts.

We're looking at a high of 44 degrees with a 90 percent chance of rain on Saturday.

Good thing the Union are in Florida, where it's expected to be 70 degrees and sunny for the 7:30 p.m. matchup with Orlando City.

Expect the same eleven as last week minus Jay Simpson, who is likely replaced by C.J. Sapong in the starting lineup. Simpson did not train on Wednesday or Thursday and is recovering from a lung bruise he suffered in the 2-2 draw with Toronto.

Here are your Union mailbag questions for Friday, March 17th:

@Kevin_Kinkead We've always had a reliable PK taker in Le Toux so who should take them in 2017? Alberg has had success but doesn't play much

If Alberg is on the field, he should be the guy.

Otherwise, I really don't know. Chris Pontius earned a few penalties last season, then allowed other players to take them. Bedoya clanked one off the crossbar last week. Fabian Herbers or Simpson might be a good choice, and I'm sure Haris Medunjanin would show some calmness and veteran savvy from 12 yards out.

That's it. Nobody else took a PK.

I think I'd let Bedoya take the next one, and if he misses, hand the duties to someone else.

@Kevin_Kinkead does a healthy/fit Ilsinho push Bedoya back and Jones out, or is he instead a first sub candidate?

No, because Ilsinho doesn't play in the middle. He would be competing for the right side job with Herbers.

Herbers is rated very highly by Curtin and he played well last weekend, so I can't imagine he comes off the field right now. You're probably looking at some sort of right side platoon with Herbers starting most of the games and Ilsinho coming off the bench.

I mentioned moving Bedoya wide to make room for Alberg, not Herbers.

Alberg isn't rated by Curtin because he doesn't run, doesn't press, and doesn't play defense like Bedoya, Herbers, or Tranquillo Barnetta. He's just not a Jim Curtin type of player. He'll get into the game by working harder, getting fitter, and proving himself in training.

That said, he's a true goal scorer, so there has to be a way to get him on the field somehow. If you get to minute 65 or 70, why not take off Herbers, move Bedoya to the wing, and put Alberg in the middle?

Bedoya did play most of his career as a winger.

@Kevin_Kinkead is Jay Simpson's taking a bump something to be expected from now on or was it sort of a freak thing?

Probably a freak thing. I don't think he has much of an injury history.

That contact with Clint Irwin didn't look to be too significant at the time, but it's less about force and more about where you actually get hit. I had two stingers while playing in the Casa League, and both came from goalkeeper collisions where I hit the ground awkwardly but didn't necessarily make hard contact with the other guy.

Probably unlikely since they have John McCarthy and a rookie in Jake McGuire backing him up.

I still think they should have sold him this winter and tried to put the money into the forward position.

@Kevin_Kinkead with the way that Derrick Jones has been playing, where do you think Edu fits when he is healthy ?

If Jones shows growth throughout the spring, then you just can't justify taking him off the field for an expensive veteran with injury concerns.

@Kevin_Kinkead If Edu comes back this season any chance he moved back to CB rather than in a more crowded midfield?

Not unless they have injuries back there.

I still think Maurice is a great player, and he's going to improve this team whether he plays center back or defensive mid. The problem is that he's too much of a risk with his injury problems and you aren't signing him to a new $600,000 contract after this season.

If the Union are really serious about youth development and building from the ground up, then Edu takes a back seat to Derrick Jones and Josh Yaro.

@Kevin_Kinkead Any change Earnie dips into AZ again for a summer move for Aron Johannsson?

I don't know how he'd do in this system, but I think he would be one hell of a signing. The conspiracy theorist might say that they went cheap on Simpson since they knew Aron Jo would be available in the summer.

The pragmatist might say that the ship has already sailed.

The premise of the article is correct.

It's nice that you're sinking money into the academy and producing your own players, but the next Lionel Messi probably isn't living in the Delaware Valley. You can find players like Derrick Jones and Anthony Fontana, but the biggest stars in MLS are still being acquired via other mechanisms.

The issue I have is not that the Union are focusing on youth, it's that academy production is only one element of roster building. No title-winning team on the planet Earth has a club comprised entirely of homegrown players.

For example, think about all of the players that come through the Barcelona youth academy. For every Sergio Busquets or Andres Iniesta, there's a Neymar, Luis Suarez, or Samuel Umtiti. That gameday 18 still includes a lot of guys who didn't come through La Masia.

In MLS, you've got Toronto bringing guys like Jonathan Osorio and Jordan Hamilton through the youth ranks while ALSO spending millions of dollars on Sebastian Giovinco, Michael Bradley, and Jozy Altidore.

The Philadelphia Union need to go down every player personnel avenue, not just academy production, if they actually want to win something.

@Kevin_Kinkead more philly tough Nando and Broken hand or Jay with the lung?

I'd go with the third option, which is C.J. Sapong's facial fracture from the 2015 season opener.

It's strange though, right? It feels like Union strikers suffer at least one horrendous injury at the start of each year. We've got a broken hand, a bruised lung, a broken face, and also Conor Casey's inability to even be ready for the start of the season. There's always some kind of issue that pops up in the spring.