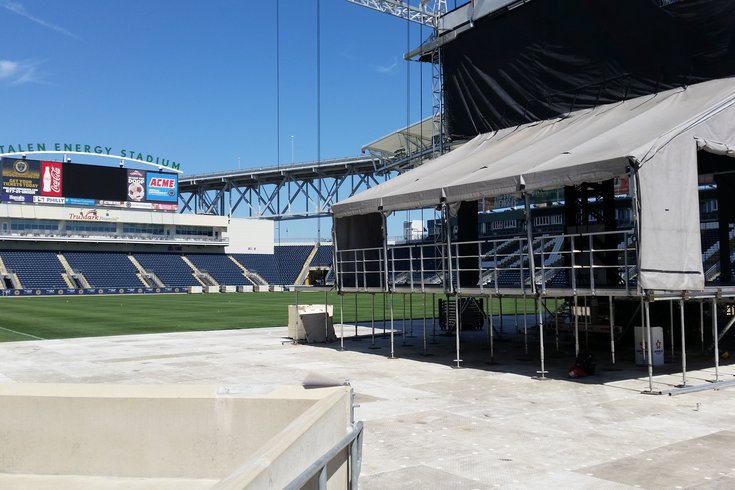 The gates are blocked off as crews prepare for this weekend's "Rock Allegiance" show, which is a two-day music festival featuring the likes of Avenged Sevenfold, Slayer, and my personal favorite, Alice in Chains.

Two stages will be built in front of the River End, with plastic slabs covering the grass on that third of the field. It's not ideal for pitch conditions, but the Union kick off a three-game road trip this Saturday and won't be back on home turf until October 16th.

Absent from training were Warren Creavalle and Ilsinho, the former who is dealing with knee tendinitis and the latter who is still feeling pain from plantar fasciitis. Creavalle arrived to the training fields after the session ended, accompanied by head athletic trainer Paul Rushing. Ilsinho did not make an appearance.

Midfielders Brian Carroll and Maurice Edu did participate in the entirety of the session. Edu was scheduled for 60 to 75 minutes of rehab duty with Bethlehem Steel this past Saturday, but head coach Jim Curtin says Edu "talked himself" into playing a full 90. Carroll is dealing with plantar fasciitis, just like Ilsinho, and may or may not be ready to start in Portland.

If Creavalle, Carroll, and Edu are all ruled out for this weekend, center back Ken Tribbett looks to be the fourth option in the holding midfield role. Tribbett played defensive mid during his time with Drexel.

Talen being prepped for the rock festival. Plastic flooring being placed over grass pic.twitter.com/T1ghS1V8Ho

What does it matter if it's on the road?

It's been five years since the Union made the postseason, which is the longest drought among MLS teams.

Playoff qualification is in sight, but there's one final hurdle to clear, and that's the looming road trip.

The Union travel to Portland this week, then play a pair of games at Toronto and Red Bull. They haven't claimed a ton of points away from home, but outside of a thrashing in Montreal, the performances have been respectable. Red cards spoiled good showings in Seattle and Chicago, and the Union scraped for equalizers in Orlando and Colorado.

One final push should get the Union over the hump and into the playoffs.

"I think, especially in this league, and the way the eastern conference shakes out, you're a couple games from either the top or the bottom of the table," said right back Keegan Rosenberry. "It's important no matter how you look at it; whether we have these three at home or away, they're big for us. It's gonna be more difficult on the road, obviously. I think we're up for the challenge. There's excitement in the group. What's the matter if it's on the road? There's almost a little less pressure on the road because you're not expected to perform as much. The potential and the expectations we have inside the locker room , I think we're looking forward to these games."

#DOOP
Jim Curtin on Brian Carrol this week against Portland: "BC will play a role in this game for sure." Carroll (foot) last played Aug 6

All work and no play

C.J. Sapong hasn't scored from the run of play since May 14th.

He's bagged a pair of penalties since then, but his production has rapidly decreased and he's struggling just to get looks on goal.

Sapong has five shots in his last six games. He's only managed to put two of those on target. On several occasions, he's been one step away from good service played into the box.

"C.J., I would be more concerned if he wasn't getting chances and looks," said Curtin. "I think he's had quality looks, they just haven't gone in for him right now. And I think strikers go through moments like this, even the best ones. (Sebastian) Giovinco went through one this year where there was a dip and he didn't score a goal for a few games.

"We have to get him service. We know that. I think there are discussions, too, and I had a good talk with him and Fabian (Herbers) today. There can be moments in the game where it's not so clear and predictable for center backs. They can maybe have some interchange, maybe have some more interchange so that C.J. isn't the one who always has two center backs draped off his shoulders and getting beat up pretty good like he did against Montreal.

"He gets fouled a lot and doesn't get a lot of calls. Part of it is the way he plays and the style he plays. He's physical, so maybe he doesn't get the benefit of the doubt. But he's a guy that we believe can get goals."