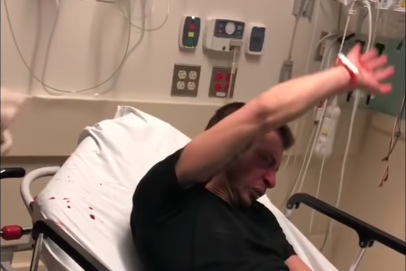 Video of the Paterson, New Jersey, police officer who was sentenced to five years in federal prison last week shows the cop striking a man in a hospital bed who was recovering from a suicide attempt.

The video was released in a U.S. District Court in New Jersey last week after the former officer, Ruben McAusland, 27, pleaded guilty to assault charges and, from a separate investigation, selling marijuana, heroin and cocaine that he stolen from a crime scene while on duty, according to court documents.

McAusland claimed he "lost" his "temper" in March 2018 when he and the suicidal man met in St. Joseph's Medical Center after the man attempted suicide.

McAusland first punched the victim in the face as the man sat in a wheelchair, before pushing him to the ground, according to court documents. Then in the victim's hospital room McAusland put on a pair of rubber gloves before repeatedly striking the victim the face.

Now-viral cell phone footage captured by former Patterson police officer Roger Then — who is also facing criminal charges for filming and then falsifying records to hide the assault — shows blood splattered across the bed.

The suicidal man suffered multiple face injuries and required eye surgery from the attack. McAusland also has been ordered to pay nearly $33,000 in restitution to the victim, court documents said.

Below are the two videos showing the assaults, via the Paterson Times. One was captured on St. Joseph's hospital's security cameras and a second recorded on a cellphone.

Warning: These videos contain graphic content showing the assault of the victim.

McAusland will begin his prison sentence on May 20.