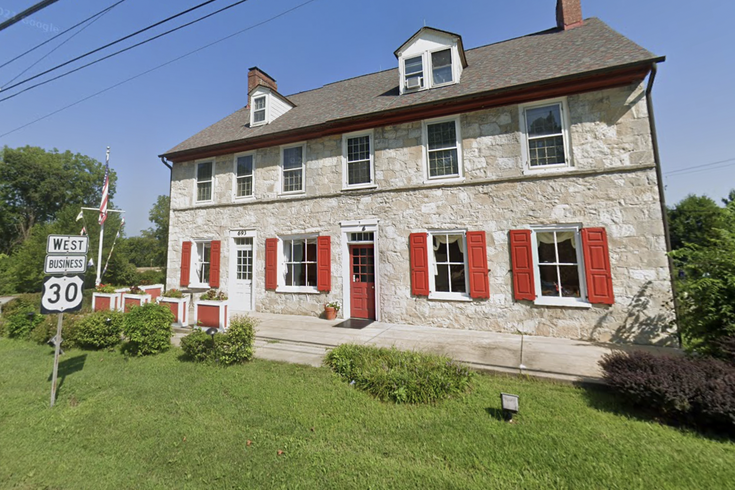 The Ship Inn was built in 1796 along the Lancaster Turnpike in West Whiteland Township in Chester County. The building is now home to VK Brewing Company, a veteran-owned business that purchased the property this summer.

VK Brewing Co. & Eatery, the veteran-owned business that purchased the historic Ship Inn in Exton last summer, has opened, though its founders are still completing the licensing process to begin selling their own beer.

Owners Jason Van Keuren and Najib Abiaad celebrated the grand opening of the restaurant last week. On Facebook, they shared photos featuring some of the taproom's food, which runs the gamut of burgers, sandwiches, pizza, pasta and oysters. Abiaad, who runs the food operation, also will introduce specials and menu items from his native Lebanon.

Happy Sunday! 🌞 The pizza and raw bar will be open at noon today for lunch and our kitchen will be fully open by 1pm for the game. We hope to see you then. GO BIRDS! 🏈🦅

The restaurant already has a full liquor license, but the owners must complete the station portion of the brewery license process before they can launch their own beer list.

We got our Federal TTB approval today!!! We are one step closer to brewing beer on site! The next step is to submit our...

In August, Van Keuren and Abiaad purchased the 18th century stone building at 696 E. Lincoln Highway, in West Whiteland Township, with plans to carry on its long history as a restaurant. After a 20-year run inside the property, but the former owners listed the building for sale at $2.25 million in February.

Built in 1796, the stone building was designed to be a place for travelers to eat and rest along the recently completed Lancaster Turnpike — designated today as part of U.S. Route 30. It served as a western milepost for Philadelphia, about 25 miles away, welcoming dignitaries like former presidents George Washington and Andrew Jackson and, in the 20th century, former first lady Jackie Kennedy Onassis.

The building was listed on the National Register of Historic Places in 1984. It has been praised as one of the best-preserved inns from the era and an enduring example of Georgian and Federal architecture.

The brewery side of the business will be run out of a carriage house next door to the main, three-story building. The restaurant on the first floor covers about 6,000 square feet and has seating for approximately 100 people. An outdoor patio seats about 40 people, with plans for an expanded beer garden area.

Van Keuren told Breweries in PA that the microbrewery plans to make a mix of IPAs and ales including stouts, porters and wheat beers. Initially, the business will offer growlers and later add four packs.

The property's history is filled with interesting tidbits from its early years. Documents from the Pennsylvania Historical & Museum Commission indicate the building was a popular place for local auctions and hosted a lavish birthday honoring the life of the late George Washington in 1821.

The Ship Inn also was a regular meeting place for the Lafayette Rangers, who formed part of the 143rd regiment of the Pennsylvania Militia, and the Hickory Club that supported Andrew Jackson. At the time, women only were permitted to enter the inn through a side door.

Van Keuren and Abiadd hope to have the brewery side of the business up and running in the near future. Keep an eye on VK Brewing Company's Facebook page for updates.