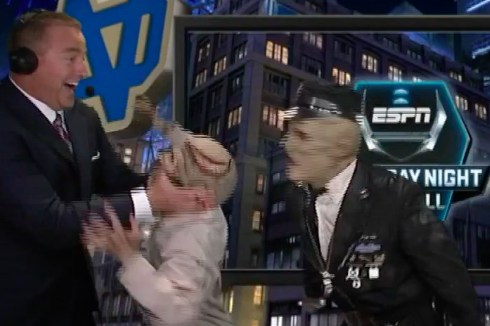 ESPN announcer Kirk Hirbstreit gets spooked by two ghosts from Eastern State Penitentiary during the broadcast of the Temple vs. Notre Dame game Saturday night.

For Temple fans, the scariest moment of Saturday night's highly-anticipated matchup against Notre Dame may have been P.J. Walker's 4th quarter interception that sealed a close victory for the Fighting Irish.

Yet for ESPN color commentator Kirk Hirbstreit, it was probably when he was ambushed by two ghosts from Eastern State Penitentiary at the beginning of the first half.

Play-by-play announcer Chris Fowler was in on the joke, as the actors dressed in creepy costumes sneaked up and spooked Hirbstreit. Watch the prank below:

According to 6 ABC, the scarers were from Eastern State's "Terror Behind the Walls" attraction.

Hirbstreit had a good sense of humor about his reaction, acknowledging one Twitter user who called him out for screaming.

I know. My bad. https://t.co/FIMsbZXDmC

His broadcasting partner Fowler certainly enjoyed himself. He called the performances of the ghouls "Oscar worthy" on Twitter afterwards.

Scariest blitz of the season. pic.twitter.com/rfi2ARKpkX