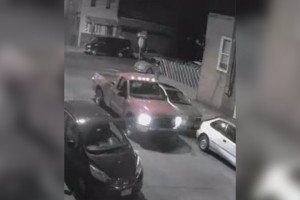 The Philadelphia Police are seeking help to identify the men who operate this truck, after, police said, they were involved in a home invasion and robbery in Fishtown on Feb. 19.

A man was struck in the face with a baseball bat and hit with the butt of a handgun when three people ransacked his Fishtown home early Friday morning, Philadelphia police said.

Upon answering the door, police said, the man was met by a woman – described as a Hispanic woman, with black hair, and wearing a black jacket with fur – who asked to use his phone.

The male victim let the woman into his home and, a short time later, according to law enforcement officials, two men forced the front door of the home open.

The men can be see approaching the home on surveillance video.

After breaking into the home, one of the men – described by police as hispanic, standing about 5 feet 6 inches tall and wearing a black jacket, gray hooded sweatshirt, and black pants – wielded a baseball bat and struck the male victim in the face, police said.

The second man – also a hispanic male – was armed with a handgun, police said, and he struck the victim on the back and side of his head.

Before the victim was able to fight them off, police said the three individuals stole Wii and Playstation 3 video consoles, as well as approximately $1000 from a water jug located in the living room.

Surveillance video shows the suspects operating a red pickup truck with the word "Drywall" printed on the tailgate, police said.

Anyone with information about this incident or this suspect is urged to call Philadelphia police at 215-686-8477 or text a tip to 773847.