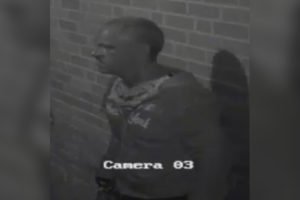 The Philadelphia Police are seeking help to identify this man, who law enforcement officials said, broke into Our Lady of Calvary Church in Northeast Philly.

A man who broke a stained glass window early last week to enter and burglarize a Northeast Philadelphia church is wanted in connection with seven similar crimes in the area, according to police.

The suspect was captured on surveillance video occurred at about 11 p.m. Sunday, Aug 21 at Our Lady of Calvary Church, 11024 Knights Road, Philadelphia police said.

WATCH video of the suspect breaking into the church below:

Once inside the church, police said, the man pried a money box from a wall and found a second money box and stole its contents.

According to investigators, the suspect took an undisclosed amount of money and fled.

Between August 14 and 29, police said they believe the same suspect committed seven burglaries in the 2nd, 7th and 8th districts.

The suspect may be driving a white Cadillac, police said.

According to police, the first crime was reported on Aug. 14 at 8:15 p.m. at Maternity BVM Church at 9220 Old Bustleton Avenue.

A witness told police that money from two candle boxes next to the altar was taken, police said. The suspect may have stayed inside the building once the church was closed after Mass, police said.

About a week later, on Aug. 21 at about 11 p.m., the burglary occurred at Our Lady of Calvary Church, and the suspect was caught on video.

Just hours later, at about 1:30 a.m. on Aug. 22, officers in the 2nd police district responded to a radio call of a burglary at Bellissimo’s Pizza at 7816 Castor Avenue. Police believe the same man committed the crime.

Officers responding to the scene found that the shop's front window was shattered with a thrown brick. The cash register was found on the floor with money still inside.

Two days later, sometime between 9 p.m. on Aug. 23 and 6 a.m. on Aug. 24, police said a suspect forced his way into a business at 8601 Frankford Ave. through a front window. Once inside, the suspect took a cash register containing an undisclosed amount of cash, police said.

At about 12:52 a.m. the same day, a witness who was walking in the 1800 block of Cottman Avenue called 911 and told police the front glass door of the Cafe Italiano on the same block had been broken and a white male suspect was inside, police said.

The suspect, police said, ran to the basement, but when officers arrived to search the cafe, they found the back door of the basement was open and no signs of the suspect.

The next day, Aug. 25, officers responded to a burglary at a KFC restaurant at 9021 Frankford Ave. An employee stated that the store was robbed sometime after it had closed at 10:30 p.m. the day before.

According to police, the employee said that when he came into work, he found the drive-through window broken and a rock on the floor along with three cash registers. He told police that cashiers usually leave $100 in each register at the end of the night, police said.

According to police, the suspect could be seen entering the business at about 4:57 a.m. on video surveillance.

Most recently, police responded to a burglary alarm at Supreme Pizza at 7514 Castor Ave. at about 3:44 a.m., on Aug. 27, where officers found the front door broken, law enforcement officials said.

The area behind the counter was ransacked, the cash register containing an unknown amount of money was missing and the door leading to the rear driveway was open, police said.

Our Lady of Calvary Church had been the target of an alleged burglar earlier this year, as well. In February, Philadelphia police officers spent two evenings hiding inside the Catholic church, lying in wait and arrested William Christopher Sides as he allegedly tried to steal the church's poor box.

Sides faces multiple burglary and theft charges in connection with that investigation. Online court records show he is due in Philadelphia Common Pleas Court next month for a hearing, but in the meantime, he remains incarcerated in another jurisdiction.

Anyone with information about the more recent incident should call Philadelphia police at 215-686-8477 or text a tip to 773847.