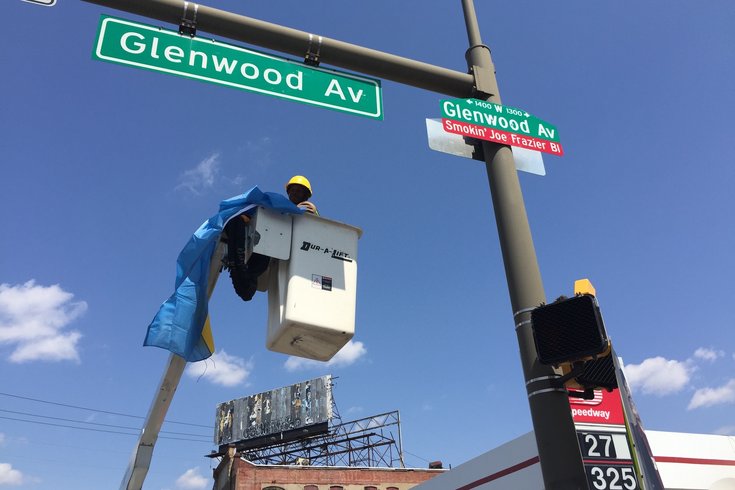 The statue was unveiled in 2015. The street was ceremonially named in his honor on Wednesday afternoon.

Now, all that’s left to complete the posthumous-recognition triple crown is finding a way to reclaim the former North Broad Street gym where Frazier trained for his successful fight against Muhammad Ali, but now houses a furniture store.

Frazier’s family, fans, boxing legends and folks from the neighborhood gathered to celebrate the ceremonial renaming of the stretch of Glenwood Avenue between Broad Street and Germantown Avenue as “Smokin’ Joe Frazier Boulevard.” The former gym is just north of Broad and Glenwood.

“Smokin’ Joe deserved to be recognized,” said Elmer Heard, the Streets Department worker who requested the job of removing the city flag that hid the new sign until 1 p.m. Wednesday. “This was a long time coming.”

That was a common refrain among those gathered to celebrate the legacy of the former heavyweight champion of the world who died of liver cancer in 2011.

The effort to get the Frazier statue created and installed in the South Philadelphia stadium complex went on for decades, and Smokin’ Joe’s daughter Weatta Frazier Collins had spent recent months rallying support for the street-name change.

At the event, fans like Townwatch Tony chanted Frazier’s name, members of the Harrowgate Boxing Club led a traditional 10-bell salute and a band performed a song in Frazier’s honor.

Speakers included boxing legend Larry Holmes, who wondered aloud what took Philadelphia so long to honor Frazier in such a fashion.

“Smokin’ Joe is a Philadelphia legend. His impact can still be felt today,” said Kenney. “He was a patriot.”

Street alluded to the gym, which is protected from demolition thanks to locals and the National Trust for Historic Preservation. Much of that local effort has come from students and professors at Temple University; the gym is located between the main campus and university hospital.

Tim McCloskey, who runs a website called Philly Fight Scene, originally pitched the idea of naming a street after Frazier nearly a decade ago. He said this week that there’s a simple way for the gym to return to its former glory.

“For all of Temple’s talk about building a huge football stadium in North Philly, I wish they would have spent five minutes considering buying Joe Frazier’s Gym on Broad Street and turning it into a gym or a community center,” he told PhillyVoice.

“It would have meant a lot to the people here," he continued. "Now it’s a discount mattress store. Now, it’s just another eyesore.” 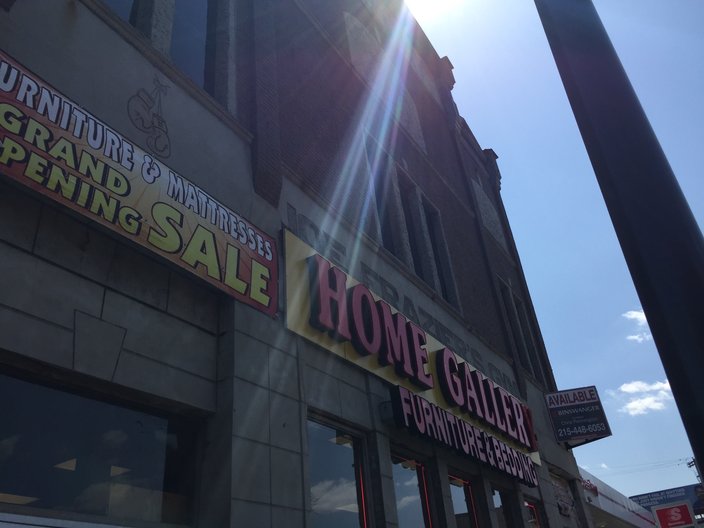 The building which once housed Joe Frazier's Gym is now a furniture store.

Perhaps that will soon change, though.


“Coming soon, we’re going to figure out a way to bring back the gym,” Street told the crowd at North Broad Street and Smokin’ Joe Boulevard.

"It means the world to me because this is something younger generations will know about for the rest of their lives," he said. "The fact that my father has a street sign is the coolest thing. I can't wait for people to now know who Smokin' Joe Frazier was."