WATCH: Springsteen jams 'No Surrender' with fan in Philly 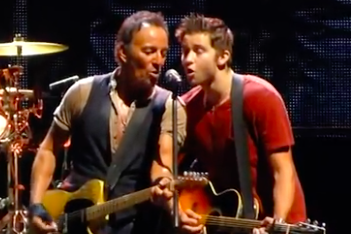 Fan joins Bruce Springsteen for performance of "No Surrender" at Citizens Bank Park on September 9, 2016.

When Bruce Springsteen plays a marquee concert these days, it tends to be the equivalent of about 2.5 concerts. The Boss and the E. Street Band are fully prepared to play sets that cross the four-hour mark and leave their fans with sore knees and ankles.

Apart from the great privilege of attending such late-career Springsteen shows, some fans have been lucky enough to get engaged on his watch and others have had a chance to climb on stage and strum out some acoustic chords with the man himself.

In the midst of Springsteen's show at Citizen's Bank Park on Friday night — two nights earlier, he again broke his U.S. record, playing 4 hours, 4 minutes in Philly — the Boss spotted a sign in the crowd and obliged a young fan who wanted to play "No Surrender" with him.

Matthew Aucoin, a Texas A&M student, took the stage at the end of "Rosalita (Come Out Tonight)" and even threw in vocals to seize the moment. It's been a memorable "River" tour for Springsteen and company. Two stops, in Pittsburgh and Foxborough, remain before it wraps up.

Kudos to Aucoin for pulling this off and Springsteen for making it happen. He's among a select group of arena circuit artists — Rihanna gives lap dances, Green Day once did a choral "Longview" in Philly, and U2 does it from time to time — who make this a part of their live acts.