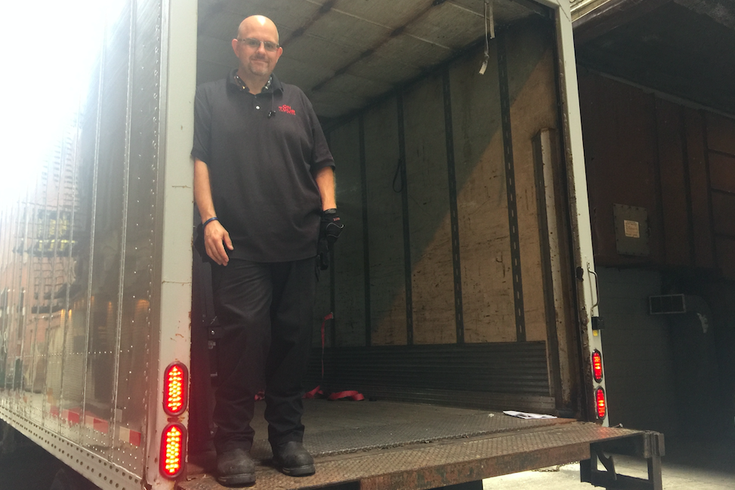 Danny Schneider is a truck driver from Kentucky. On Tuesday, he mastered the fine art of trucking trigonometry to maneuver his big rig onto a narrow Center City alley as onlookers marveled as his ability.

Danny Schneider is a truck driver from Kentucky.

Around 12:20 p.m. on Tuesday, he arrived on 15th Street just south of Walnut to find barriers related to ongoing utility work.

For the better part of 15 minutes, he battled the laws of trucking trigonometry in an effort to maneuver his big rig into position to deliver his haul on Chancellor Street.

With a parking garage lower than the top of his truck across the street, he expertly pulled off a tractor-trailer K-turn as a bunch of onlookers took it all in. (Well, expertly but for hitting a street sign a couple times.)

“It was nothing,” the friendly Schneider shrugged as he was unloading his On Tour cargo to the back of the Bellevue. "I do it all the time."

Since Schneider’s job brings him to cities often, he was well versed in handling such close confines.

He did note, however, that there was a scenario that would have prevented such a feat.

“Good thing I was driving a 40-foot truck. If it was a 53-footer, I wouldn’t have been able to get back here.”

It was an impressive performance to say the least, one that – thanks to the beauty of iPhone video – you can enjoy as me and co-worker Dan Craig did with our very own eyes.

(And, don't worry, people who chained your bikes up outside the Applebee's. Danny came close, but did not hit them.)