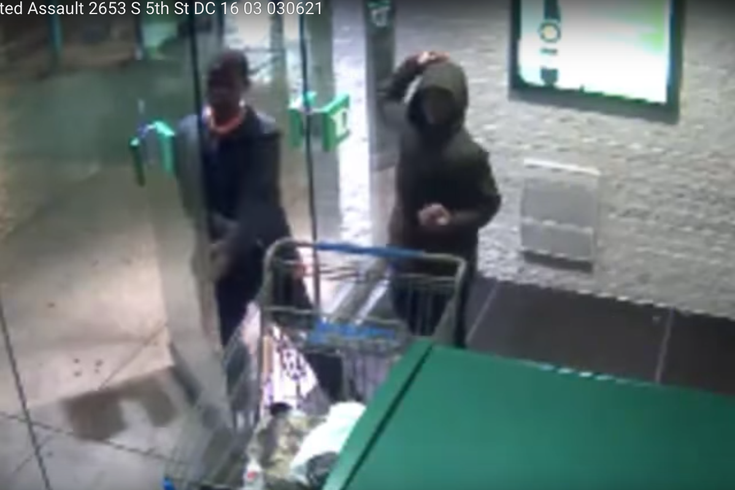 Philadelphia police say two boys threw rocks at a homeless man inside the vestibule of a South Philly bank. The man entered the bank building seeking cover from the rain, police said, and the juveniles are wanted for aggravated assault.

Two boys are wanted for aggravated assault after they repeatedly pelted a homeless man with stones in a bank lobby in South Philadelphia, Philadelphia police said. The homeless man entered the bank vestibule seeking cover from the rain.

According to police, at about 10 p.m., May 29, the 42-year-old, homeless man ducked into the lobby of the TD Bank branch, at 2653 S. Fifth Street, to escape a rainstorm, when two boys entered the lobby and began throwing stones at him.

In the video, the two boys are seen laughing as they throw rocks at the man. The boys leave the lobby several times, only to return with more rocks and continue the alleged assault.

Also, at one point, the video shows both boys entering the lobby with a shopping cart and ramming it at the male victim.

The victim was transported to Methodist Hospital in South Philly, police said, where he was treated for neck pain and minor cuts to his head.

Police are asking anyone who sees or knows the juveniles to contact 911 immediately. Tips can be submitted anonymously by calling 215-686-8477 or texting 773847.