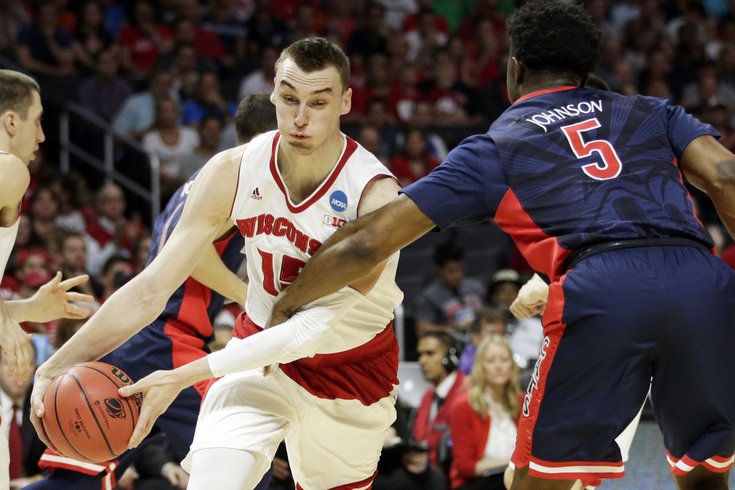 Wisconsin forward Sam Dekker moves on Arizona forward Stanley Johnson reaches in during the first half of their regional final on March 28 in Los Angeles.

Just remember there will be eight other players on the court on Monday night when the Blue Devils and Badgers square off in the NCAA Tournament championship game.

"It won't be one guy against another," Duke coach Mike Krzyzewski said. "I know how you like to do it in the papers ... it's like a boxing match each time. It hardly ever works out that way, but it's cool to put it down that way."

Fair enough. With that in mind, here are a few other players and story lines to watch Monday night that don't have to do with the dominant big men.

CLUTCH DEKKER: Wisconsin junior Sam Dekker has turned into a bona fide star these last three weeks. The 6-foot-9 forward is averaging 20.6 points per game in the tourney. He's turned into a force in the clutch, like his 3-pointer with 1:42 left to put the Badgers up for good in the 71-64 win over unbeaten Kentucky. He then went down to the other end and drew a charging call on Wildcats freshman Trey Lyles.

Lately, it's been Kaminsky setting up Dekker.

"If you look at some plays at the end of games here, it's me setting ball screens for Sam. Not many times do you see a 7-footer setting a ball screen for somebody who is 6-foot-9," Kaminsky said. "It opens up a lot of stuff for people because they've got to be paying attention to where we are on the floor."

Jones cites Duke's 80-70 win at Wisconsin on Dec. 3 as the game that gave him confidence in college. He scored 22 points on 7-of-11 shooting then.

The pride of Apple Valley, Minnesota, is hearing from folks back home hoping that he can spoil Wisconsin's run.

"I've been getting a lot of tweets from people in Minnesota, telling me how everyone in Minnesota has been cheering for me," Jones said. "Don't let Wisconsin win, stuff like that."

CHANGING TIMES: Jones' night highlighted a blistering shooting performance for Duke, when the team went 30 of 46 from the field (65 percent).

Nigel Hayes had a subpar day for Wisconsin with four points. Dekker, who was bothered by a sore ankle then, had just five points.

"I don't think we've had six stops all year consecutively regardless of opponent," Gard said. "But to be able to do that in that environment last night against Kentucky was a big step."

Justise Winslow had just five points against Wisconsin in December. Rasheed Sulaimon scored 14 off the bench.

Sulaimon is now off the team. Winslow is a proven commodity, a 6-foot-6 forward who can defend on the perimeter or play as an undersized power forward jockeying for position in the paint.

"I've grown a lot on the defensive end," Winslow said.

GUARDING UP: Speaking of defense, Wisconsin coach Bo Ryan cited Duke's athletic ability on the wings and quickness in the paint as big reasons why the Badgers couldn't keep up with Duke in December.

Since then, Duke has gone to a smaller starting lineup, with Okafor, Winslow, Jones and senior Quinn Cook accompanied by 6-foot-5 Matt Jones in a three-guard look. The Blue Devils also have 6-foot-9 forward Amile Jefferson and 7-foot center coming off the bench.

But Jones and Winslow will be giving up a couple inches when they're matched up against Dekker and Hayes, who is 6-8.

"You just have to fight every possession. You can't allow them to get comfortable," Matt Jones said. "I know Dekker likes to post up smaller guards. We just all have to fight 'em, whether it's in the post, making it hard for them to catch the ball."