Who the Eagles are going to draft in the first round, by percentage 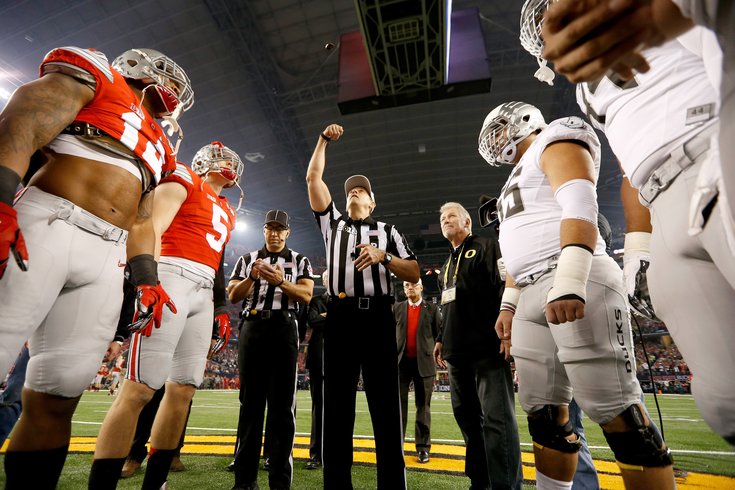 During my weekly Eagles chats here at PhillyVoice.com (shameless plug -- every Wednesday at noon) or on Twitter, I often get asked what percentage chance the Eagles have at landing Marcus Mariota. I never answer them, because personally, I hate putting percentages on things. Percentages are finite, while the NFL Draft is anything but. However, because I'm not above being a complete sellout, let's put percentages on who the Eagles are going to draft in the first round, shall we?

The Eagles are trying to sell Sam Bradford as their franchise QB. I don't buy it for a second. A few questions to ask:

• Do the Eagles think Bradford is better than Nick Foles? Clearly they do.

• Do they think Bradford can be a much better QB in their offense than he's been in St. Louis, where he often played behind a garbage offensive line with sub-par skill position players? I'm sure they do.

• Do they like Bradford's upside, and see a player who was a former #1 overall pick that at one time checked off all the boxes -- Smarts, accuracy, leadership, arm strength, and underrated mobility? Again, I'll bet they do.

• Do they really think a player coming off two ACL tears in consecutive seasons with a half-decade career QB Rating south of 80 and a contract that expires at the end of the 2015 season is their long term answer at QB? Please.

1) He's a player the Eagles think is an upgrade from Foles, and they get a year to watch him play in their system before they have to decide whether they want to give him a contract extension or not. That is of course if they are unable to get Marcus Mariota.

2) He's trade bait, to help the Eagles ascend up the draft board to get a QB they think really IS their long term answer. A few weeks ago, we speculated on how the Eagles could make that happen in a draft-day trade.

On February 27, we reported the following:

Every day, with little things I hear, evidence continues to build that the Eagles are going to make a strong play for Marcus Mariota. To note, this is something I had previously thought to be unrealistic, so as bits of information have trickled in, they've been absorbed on my end with skepticism. But it appears the Eagles are determined to get their guy.

Butt-covering disclaimer: Of course, definitively forecasting something like this is a lot different than, oh, saying the Eagles were moving on from DeSean Jackson. That was something that was completely within the Eagles' control, and thus, much easier to definitively report. Forecasting an Eagles trade that would land them Mariota is extremely difficult, considering the high number of variables and other teams involved. In other words, while the Eagles want Mariota and seem determined to make it happen, this is not a slam dunk.

For full disclosure, one very significant bit of evidence I did not report was that it appeared that the Eagles were not sold on Nick Foles as their guy at QB. Foles is gone, of course, and the Eagles obviously still don't have Mariota. Therefore, I'm somewhat less bullish on the Eagles landing Mariota now than I was then.

However, my information that Foles wasn't their guy has been replaced with the common sense notion that Bradford isn't either. Meanwhile, the other bits of evidence I've been hearing along the way still very much point to the Eagles making a strong play to get Mariota. Again, it's far from a slam dunk because there are other teams involved, but the Eagles appear to remain determined to make it happen.

Florida State is loooooaded with NFL prospects, and both Chip Kelly and defensive coordinator Bill Davis skipped FSU's pro day to attend UConn's to see Byron Jones. Jones is now also scheduled to meet with the Eagles at the NovaCare Complex for one of the Eagles' 30 allotted pre-draft visits (per Geoff Mosher). That is a hell of a lot of attention to give to one player.

Jones checks the boxes in terms of what the Eagles are looking for in a defensive back. He's big (6'1, 199, 32" arms, 10" hands), he's versatile, he's physical, and he's a stellar character guy, via Lance Zierlein of NFL.com:

"Team captain and leader on the field and in the locker room. Scouts say he's willing to play hurt and inspires his teammates."

He is also incredibly explosive (spider chart via mockdraftable.com):

If the Eagles don't trade up for Marcus Mariota, I'd have Jones as the most likely Eagle from this draft class.

So far, the Eagles have brought in (or will bring in) five wide receivers for pre-draft visits to the NovaCare Complex. They are listed below, and you can click on any of the below names for analysis of each player:

However, while the Eagles have shown a ton of interest in the wide receiver position in general, none of the above names are "slam dunk" first round picks. I'm not sure there will be a player the Eagles absolutely have to have when they're on the clock at 20. It feels more likely to me that they'll find more value in drafting a receiver in the second or third round, and possibly even double-dipping on receivers like they did in 2014 -- just not at 20.

Fisher is listed as a tackle, but many see him as a guard. For the Eagles, he could be their "RGOTP, RTOTF," or "right guard of the present, right tackle of the future." Fisher could replace Todd Herremans at RG in the short term, and then eventually take over for Lane Johnson at RT long term whenever Johnson takes over for Jason Peters at LT.

Fisher tested extremely well at the Combine, running the best 20 yard shuttle and third best 3 cone drill among all offensive tackles competing at the Combine since 1999. His spider chart, via mockdraftable.com:

Fisher would be a perfect fit in the Eagles' zone blocking scheme, and would give them sorely needed youth on an aging offensive line with no depth.

Both Fisher and Clemmings could be the Eagles' "RGOTP, RTOTF," as described above. While Fisher is more of a scheme fit, Clemmings is more dominant. Here's a highlight reel of Fisher:

Fisher is more of an athletic technician, while Clemmings is a mean, dominant brute. Watch him kill people in his highlight video:

With a backfield of DeMarco Murray, Ryan Mathews and Darren Sproles, it's no secret Chip Kelly wants to run the crap out of the ball in 2015 and beyond. Clemmings could be a physical presence in that rushing attack.

However, I do lean toward Fisher, because he's...

Collins is perhaps the player most commonly linked to the Eagles in mock drafts, which makes some sense because the Eagles have had a desperate need for help at safety for the last half decade. In fact, Collins was my first round pick for the Eagles in my Eagles only mock draft, version 2.0, although I've since come to disagree with that pick.

The Eagles seem to be steadfast in their desire for a versatile safety who can play centerfield, while also having the ability to drop down and cover slot receivers. They seem to place a much lower value on in-the-box thumpers like Collins. While Collins is a very good player at a position of major need, he's not really the Eagles' cup of tea.

Peters would be a tremendous fit for the Eagles. He has size and excellent cover skills. There are some who think he's even more talented than the consensus #1 rated CB in this draft, Trae Waynes of Michigan State. However, there are serious character concerns surrounding Peters, who was kicked of the team at Washington.

The Eagles have undoubtedly done their research on Peters and by now have probably decided whether or not he's on their board... at all. While Washington kicked him off their team, they did not cut off all ties to him, as Peters was allowed to work out at Washington during their pro day. If the Eagles conclude that his talent trumps the character concerns, they could take a chance on him, although I find that to be a long shot, considering the extreme premium Chip Kelly places on #culture.

Gurley is a man. He is a no-nonsense, downhill runner -- See hole, hit hole, and if anyone gets in the way of the hole, run through him. Look:

His career rushing numbers are below. Note the yards per carry, playing in the SEC:

The major drawback to drafting Gurley is that he tore his ACL in November of 2014, and will probably miss at least some of training camp, at a minimum. Of course the flip side of that is that he'll be drafted much lower than he originally might have been. The Eagles have loaded up this offseason on players who have had recent ACL tears, and seem to be willing to take a chance on those guys more than other teams.

Obviously, the Eagles just signed DeMarco Murray and Ryan Mathews, but what if they think Gurley is a top five type of talent in this draft? There aren't enough snaps to go around in 2015, but in five years do you want to look back at this draft and ask, "How in the hell did we pass on Todd Gurley?"

The "field" could consist of any number of possibilities:

• At this point, I feel that Byron Jones is the corner the Eagles most prefer at 20. If my read on that is wrong or if Jones is already gone by the time the Eagles are on the clock, others corners such as LSU's Jalen Collins, Wake Forest's Kevin Johnson, and Utah's Eric Rowe have been linked to them. Those three guys could be trade-back options, or Trae Waynes could be a trade-up option if he falls into the teens.

• We noted Fisher and Clemmings above, but there are a lot of quality offensive linemen in this draft. Guys like Florida's D.J. Humphries, LSU's La'El Collins, or Stanford's Andrus Peat could be options for the Eagles at 20. Iowa's Brandon Scherff should be long gone, but he's another option if he unexpectedly falls.

• This draft is also loaded with quality edge rushers. The consensus top five guys are Dante Fowler, Vic Beasley, Randy Gregory, Shane Ray, and Bud Dupree. The Eagles have had four reported edge rushers in for visits, including Ray, which indicates the position is on their radar. I don't expect one of those five guys to fall, but if one did, he could be hard to pass up. The Eagles could also potentially make a modest trade back and still land guys like Virginia's Eli Harold or UCLA's Owamagbe Odighizuwa.

• How about a surprise QB, like UCLA's Brett Hundley? Or a surprise DE, like Oregon's Arik Armstead? Or maybe an athlete like Washington RB/LB Shaq Thompson?

• And then of course, the Eagles could draft a guy in the first round that nobody saw coming, like they did with Marcus Smith a year ago.