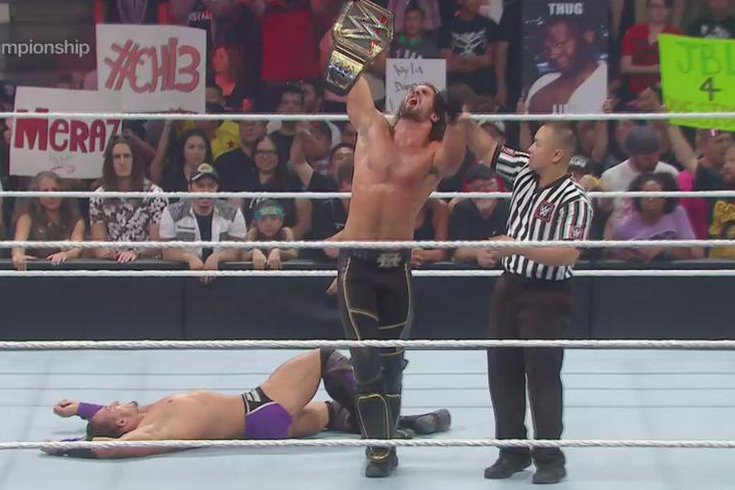 Neville was within nanoseconds of winning the WWE World Heavyweight Championship on Monday night.

Live from the SAP Center in San Jose, CA, WWE presented Raw for the first time in this arena since the night after WrestleMania 31, when Brock Lesnar was suspended for raising hell and Seth Rollins celebrated his championship win after cashing in his Money in the Bank briefcase the night before.

Rollins had his hands full on Raw, though, as he faced an unlikely opponent in the opening match as he put his WWE World Heavyweight Championship on the line. Lesnar was in the house and had a message for The Undertaker. MizTV was the setting for furthering the Cesaro/Kevin Owens feud, and the Divas were showcased again in spectacular fashion.

There were still sad eyes in San Jose as the wrestling industry continued to mourn the loss of “Rowdy” Roddy Piper. WWE tolled the bell 10 times, as per usual for ceremonies like this, and showed a video tribute on Piper a couple times throughout the night. There’s a reason why WWE has one of the best production teams in the country, and this video shows you why.

The WWE World Heavyweight Champion opened up Raw and once again bragged about how he purposely broke John Cena’s nose in last Monday’s main event. Obviously he didn’t do it on purpose, but it’s a good story to tell heading into Summerslam. And I say heading into Summerslam because Rollins actually challenged Cena to a Winner-Take-All match at the biggest event of the summer.

Cena, who will obviously not be back for a bit since he has to heal from emergency surgery on his broken nose, will likely put up his United States Championship against Rollins’ WWE World Heavyweight Championship. The match intrigues me only because of the probability of seeing a double champion, which we haven’t seen in a while. I’m always a mark for that kind of stuff.

However, it’s strange that the champion is the one challenging the challenger, and equally as confusing since Rollins tapped clean to Cena last Monday.

But, to basically show he’s on the same wavelength as Cena, Rollins put up his championship in an open challenge for the first match of the night. Who would answer?

It's @WWENeville who fits the #OpenChallenge limits!! It's ON for the World Hvt. Title LIVE on #RAW! @USA_Network! pic.twitter.com/WE7YAIzyto

The Man That Gravity Forgot, Neville, answered the challenge and had his first WWE World Heavyweight title shot since being called up to the main roster after WrestleMania – in the same building, I might add.

And this match may have been one of the best opening matches of a wrestling show I’ve seen in a long time. A very long time, actually. Neville had some great near falls, including one where I thought he had actually won because I didn’t see Rollins’ foot on the rope. The visuals were fantastic, and Neville is made.

Rollins overcame a second Red Arrow attempt by Neville and moved out of the way, then nailed The Pedigree to retain his title. That’s one of the best matches on Raw this year, and it could certainly be a match of the year candidate if the category had at least 10 matches. Great stuff.

It was a pleasure to see Paul Heyman back in a ring with the presence of The Beast beside him. While The Undertaker didn’t make an appearance, we still have three weeks left until Summerslam. We’re sure to see him within that time span again on Raw.

Heyman mentioned on the Raw pre-show on the WWE Network that he was going to divulge information about The Undertaker that Vince McMahon doesn’t want him to, but that didn’t amount to a lot. Anyone who paid attention to the backstage newsbits at WrestleMania XXX over a year ago knows that Taker suffered a brutal concussion during his match with Lesnar and needed to go to the hospital after his match was over. Heyman not only divulged that, but said Taker has been begging WWE for another shot at Lesnar, and forced their hand by interfering in his title match at Battleground.

I mean, I guess it could have been worse? I don’t really mind the angle since it adds to the story, but imagining Taker begging for anything at this point is somewhat unbelievable. But, the name value of this match is still relatively huge and Summerslam has that big event feeling moreso than it has in the last handful of years. And this match is being built way more and a lot better than most, if not all, of the others matches thus far. I’m pretty intrigued by this.

Roman Reigns, Dean Ambrose and Randy Orton teamed up in Monday night’s main event to take on Bray Wyatt, Luke Harper and Sheamus. I understand the rotating storylines in this match, but after last Monday’s main event between Rollins and Cena, this main event left a lot to be desired.

"The enemy of my enemy is my friend ... consider us your 'friend!'" #RUN! @WWEBrayWyatt @WWESheamus #RAW pic.twitter.com/VX5uCqSQKd

And I had a big problem with the ending. Reigns pinned Sheamus with a spear, where there were only two people who should have been pinned. If the heels were to go over, then Ambrose would be the logical choice to take the fall out of him, Reigns and Orton. Since the faces went over, one would assume out of Wyatt, Harper and Sheamus that Harper would be the logical one to take the fall.

But, nope. It was Sheamus. The Money in the Bank winner hasn’t looked too great lately and his imminent feud with Orton is one that isn’t exactly a great story that fans are clamoring for. It’s almost like winning the MITB briefcase does less for the winner in the short-term and more in the long-term, should WWE decide to put the title on them.

For now, Sheamus isn’t close to being a legitimate championship contender. I can buy him as a World Champion because he’s been one before, but it’s all about the reign. His first reign in 2009 wasn’t that great, so I expect his second reign to be better, despite how annoyed I get when he’s on my television.

He doesn’t entertain me anymore. His character is so one dimensional and his look is still embarrassing, even for him. Just grow the hair back out and grow a normal beard, Sheamus. Please.

The Divas division is only getting stronger. Monday night, we officially found out what the group involving Paige, Charlotte and Becky Lynch will be called – the Submission Sorority. Not bad. So far, we have the Submission Sorority, Team B.A.D. [Beautiful and Dangerous] with Naomi, Tamina and the NXT Women’s Champion, Sasha Banks, and Team Bella that includes Nikki, Brie and Alicia Fox.

To add to that, Naomi called out UFC Women’s Bantamweight Champion, Ronda Rousey, who knocked out Bethe Correia in 34 seconds on Saturday night at UFC 190, in a backstage interview. She said Team B.A.D. are the baddest women around. This could lead to something great.

As an aside, UFC President, Dana White, said on Saturday that WWE was “fake sh**” on Twitter, and got inundated with responses by not only wrestling fans, but WWE and TNA superstars of how their injuries aren’t exactly fake. I think it’s White just trying to stir up attention, and he certainly did that.

I can’t imagine he really thinks what he said on Twitter as 100 percent true, but it’ll be interesting to see how he reacts when Rousey competes at WrestleMania. She’s made it clear that’s what she wants to do, and it’s probably quite a low blow to him, because WWE has the ability to produce better stories and events than UFC does. It’s a matter if they will, but nothing UFC does will ever top WrestleMania, and maybe White’s a little bitter about that.

The WWE Tag Team Champions, the Prime Time Players, were once again on commentary during an eight-man tag team match, to which Xavier Woods lamented, “Commentary again!? I’m glad that you’re fighting champions!” I’m with Woods. It’s no good to be a champion if you’re never wrestling.

There’s no number one contender right now for the Tag Team titles, so we’ll probably see some type of angle within the next week to build toward a Tag Team Title match at Summerslam.

The Miz finally did something great, and we’ve been waiting a while for that. In the beginning of his MizTV segment, Miz ran down all the “talk shows” in years past and said there would be none of them and certainly no MizTV if it wasn’t for “Rowdy” Roddy Piper and his “Piper’s Pit” talk show. Not to mention he was wearing his own style kilt for the segment, as well.

That was a fantastic tribute to Piper, whose Pit segment might be some of the most underrated segments in wrestling history. Miz’s reactions to what was happening between Owens and Cesaro were awesome and on point, and there was a nice subtle tribute since both Owens and Cesaro had a mini brawl before Owens got away and left the ring. Their match at Summerslam could be a show-stealer. Getcha popcorn ready.

Miz then went right back into character after the show.

Stephen Amell, star of the TV show, “Arrow,” said that he would confront Stardust next Monday on Raw. This was after Stardust taunted Neville after his loss to the WWE World Heavyweight Champion and then apparently taunted Amell. Well, he’s had enough. Next Monday they will confront each other! Appointment television.

• The New Day and The Ascension d. the Lucha Dragons and Los Matadores by pinfall after Kofi Kingston hit Kalisto with Trouble in Paradise.

• Charlotte and Becky Lynch d. Nikki and Brie Bella by submission after Charlotte made Nikki tap to the Figure Eight.

• Rusev d. Mark Henry by pinfall via a superkick.

• Paige d. Naomi by submission via the PTO.

• Roman Reigns, Dean Ambrose and Randy Orton d. Bray Wyatt, Luke Harper and Sheamus by pinfall after Reigns hit Sheamus with a spear and pinned him.

Beginning this Thursday, yours truly and Philly.com’s Vaughn Johnson will be partnering together to bring you The Straight Shooters wrestling podcast, exclusively at Wildfire Radio. We’ll talk about everything in the world of professional wrestling for one hour, and we’ll probably leave you wanting more. That’s why there’s always next week.

Check out our page here. You can listen to our demo that previewed WWE’s Beast in the East show from Japan and last month’s Battleground event here.