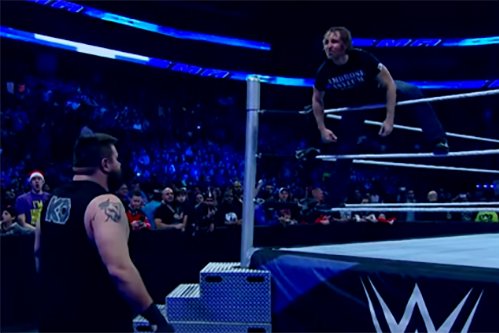 Dean Ambrose and Kevin Owens continued their feud on Thursday night, but a new player came into the mix.

On the heels of one of the best Monday Night Raws of the year – which took place here in Philly – WWE invaded the Prudential Center in Newark, N.J. for SmackDown on Thursday night. As 2015 comes to a close, and the Slammy Awards taking center stage this coming Monday on Raw, we’re left looking back at a whirlwind year for WWE.

In 2015, there’s been a lot of hits, a lot of misses, and a whole lot of new faces brought to the WWE roster. With NXT becoming a global phenomenon in their breakout year, 2016 looks to be headed in the right direction already for the company. Can they ride that success through WrestleMania into the lull that is summer to the end of 2016? One thing’s for sure – it’ll be exciting to see.

The new WWE World Heavyweight Champion, Roman Reigns, kicked off the program this week with an in-ring promo thanking his supporters. He mentioned how special it was for him to win the championship, especially on his daughter’s birthday. Reigns said he doesn’t think he has too many days left in the WWE due to his attacks on both Triple H and Vince McMahon on back-to-back nights on Sunday and Monday. He expected there would be “repercussions” on Monday, so expect Triple H, or maybe even Vince McMahon, to appear on Monday Night Raw.

Let it sink in.... Your NEW @WWE World. Hvt Champion @WWERomanReigns in here to kick off #SmackDown! #NewChampion pic.twitter.com/Xzq7NdEgVZ

Sheamus interrupted Reigns’ promo with a heartfelt message about how happy he was for Reigns on his title victory, followed by letting us know that The Authority was conducting an extensive investigation into Reigns’ actions, whatever that means. I’m not so sure they need to investigate anything, but, at least, that leaves some question as to what will happen on Raw this Monday.

Sheamus, who was given such power by The Authority ostensibly, would call out security to take Reigns out of the building, as he wouldn’t be able to participate in any matches until The Authority’s investigation was complete. The security wouldn’t really do much, and Reigns completely destroyed them. It’s like Attitude Era Reigns at this point, which is AOK with me. It’s a lot better than the cornball superhero John Cena II they’ve been trying to build him up as.

Dolph Ziggler and the former Intercontinental Champion, Kevin Owens, would face each other in the main event, but before the two faced off, Ziggler had a pretty good promo backstage. During the Stone Cold Podcast on the WWE Network after the TLC pay-per-view on Sunday night, Shawn Michaels threw a ton of shade Ziggler’s way by saying he doesn’t do enough to separate himself from the look and character Michaels built during his prime in the 1990s.

Ziggler sounded like he had a chip on his shoulder during this promo, saying he challenges the locker room to be better than he is after each and every match, admitting he hasn’t done what he’s needed to do to win the big one. He said he doesn’t take days off, he doesn’t call in sick, he never lost his smile, and he sure as hell won’t lose his attitude. Of course, Michaels is infamous for his February 1997 promo on Thursday Raw Thursday, saying he lost his smile and had to go back home and find it while recuperating from a knee injury at the time.

Owens also had a backstage promo before the main event and called Dean Ambrose a cockroach with his Intercontinental Championship. He said Ambrose could not survive him, and that Ziggler would now have bad things happening to him, saying he wouldn’t stop until he puts Ziggler in a hospital.

Both Ziggler and Owens had really good prematch promos, which really made the main event feel more important than normal. The match was good, also, but the ending was a little cheesy for me. Owens was disqualified after throwing Ziggler over the announce table. They could have easily done a blatant low blow or something like that and it would get the same point across, and probably make Owens look even better.

It looks like Ambrose isn’t really worried about Owens threatening to put him in an insane asylum to get back his title. I hope this feud lasts forever.

Ziggler superkicked Ambrose out of nowhere on the outside of the ring after Owens superkicked Ziggler in the ribs. Ziggler didn’t look too upset that he kicked the wrong guy, and Jerry Lawler and Booker T argued about whether it was intentional or not. Hey, it’s got people talking, and that’s only good for Ziggler. I’m looking forward to seeing where this goes.

You thought being beat up by the #LUCHADragons and @WWEUsos would keep The #NewDay down? Think again! #Smackdown pic.twitter.com/BjUtrNOjli

Interestingly enough, the Lucha Dragons have come out on the winning end the last three of four times they’ve been in the ring with the members of the WWE World Tag Team Champions, The New Day.

"Everyone in this building, everyone on this PLANET, is JEALOUS of #TheNewDay!" - @XavierWoodsPhD #SmackDown https://t.co/j90yqfWGFk

Thankfully, the champions were back to their old and entertaining ways, claiming the Dragons and the Usos were jealous of them, which is why they attacked them on Monday night. The entire angle on Monday came off really poorly and made the Dragons and Usos look pretty bad, so we’re probably supposed to forget all that happened at this point.

Don't celebrate a victory yet, #NewDay! @SinCaraWWE has other plans! #SmackDown pic.twitter.com/emuPztBxqY

I’m not sure why the Dragons keep getting wins, because of all the tag teams in WWE, they’re probably the fourth or fifth in the rankings, and that’s being generous. You have The New Day, the Usos, the Dudleys and the Wyatts all above them in who should be holding the Tag Team titles anytime soon.

However, the Dragons deserve the wins and deserve prominent spots on the television shows, I just find them beating the tag team champions the last three out of four times as not being smart booking. If they don’t win the Tag Team titles eventually, all of this is for naught.

This Tuesday on Super SmackDown LIVE! the Dragons will try to take the Tag Team titles away from the champions.

"Sleep with one eye open... We are EVERYWHERE, and we can NEVER stop." - @WWEBrayWyatt #SmackDown pic.twitter.com/msTFzoaN7q

Bray Wyatt addressed what looks like the end of his feud with the Dudley Boyz and company, and it sounds like he’s looking for new victims.

“To be extreme means to push oneself beyond the limits of ordinary men. Unfortunately, no matter how hard you push yourself when you come face to face with fear, extreme just isn’t enough.” The other members of the Wyatt Family had something to add before Wyatt continued.

Erick Rowan: “You can search for the light, but all you’ll find is darkness.”

Braun Strowman: “I find solace in the muffled screams of those who take their last breaths in my arms.”

Wyatt continued, “We are not of this world. We do not obey your rules. We do not conform to your society. Sleep with one eye open and know that we are everywhere. And we can never stop. Run.”

Tyler Breeze, despite suffering yet another loss, was part of what could have been the most entertaining 30 seconds of SmackDown. Before his match with Titus O’Neil, he was backstage with Summer Rae getting his pamper on when Goldust crept out from a curtain behind them. Awkward. Rae would then spray some Febreze, which apparently didn’t agree with Goldust.

This is perhaps the ONLY time that @mmmgorgeous has NOT wanted to be in a selfie! @Goldust #SmackDown pic.twitter.com/j6h86pF2JB

During their match, Goldust would come out and join the lady in the VIP lounge, and was promptly scolded by Rae. He then stole the selfie stick and took a picture of himself, Rae, Jerry Lawler and then Breeze himself.

This is probably going to be a lot better feud than Breeze-Ziggler was, isn’t it?

Hey, don’t look now, but we have some interesting storylines in the Divas division again! Becky Lynch won another match, and, again, with the help from Charlotte. That didn’t sit well with Lynch because she thinks that Charlotte thinks she needs her help. Charlotte swore she wasn’t a bad person, which pretty much will eventually make her a bad person, am I right?

Got that? Good. I think I do. During Lynch’s match with Brie Bella, Charlotte’s music hit and she came down to the ring, but it didn’t look like it distracted Brie too much, but Charlotte would trip her up, allowing Lynch to capitalize for the submission win. Lynch saw the trip this time but decided to go for the win anyway. After the match, she didn’t look too thrilled to win in that fashion.

• Non-Title: Alberto Del Rio (c-US) d. Ryback by submission via the cross armbreaker. Sheamus, Barrett and Rusev distracted Ryback as he was about to hit Shell Shocked, leading to Del Rio capitalizing.

• Titus O’Neil d. Tyler Breeze by pinfall via the Clash of the Titus. Goldust would come out and distract Breeze.

• Dolph Ziggler d. Kevin Owens by disqualification after he threw Ziggler over the announce table.