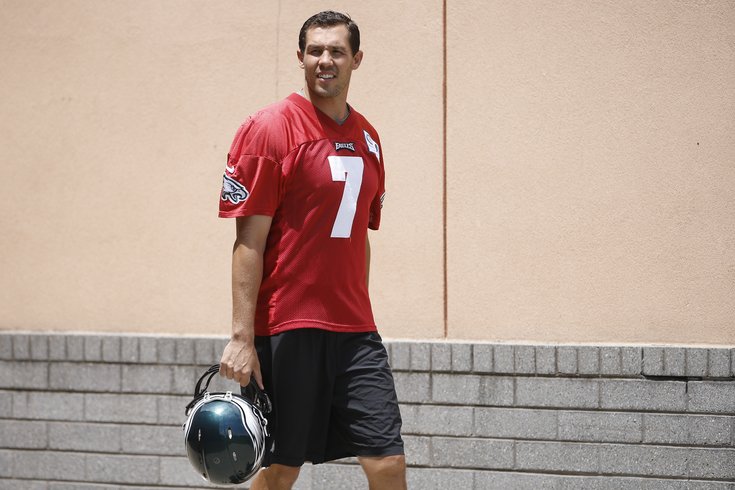 Sleevie Wonder is likely little more than a one-year rental.

This week, all week long, we took a brutal look at each of the teams in the NFC East, in detail. The first target was the last place 4-12 Dallas Cowboys, who we roasted on Monday. On Tuesday, we busted on the Giants. Wednesday we ripped the Redskins.

Today we'll finish up with your Philadelphia Eagles. To note, we did not talk about the positives of any of the Eagles' NFC East rivals, because, well, that wouldn't be any fun. They were 100 percent vitriolic, and it will be no different with the Eagles.

1) Sam Bradford is the Eagles' quarterback

On the whole last season, Sam Bradford was very clearly a below average quarterback. Here is where his numbers ranked among other quarterbacks:

He also threw the seventh-most interceptions.

The only stat above that is somewhat favorable was Bradford's completion percentage, which was a little above average, but only because the vast majority of his completions were short throws. The typical Bradford completion is noted here:

(That's a forward pass, to be clear, so at least DeMarco fell forward).

Of course, many Bradford supporters (most notably his agent) pointed to Bradford's "last seven games," which will go down as some sort of magical time in American history in which diseases ceased to exist, it was 81 degrees and sunny literally everywhere, and we had world peace.

In reality, Sam Bradford's last seven games, while certainly better than his first seven games, were not impressive. We even published a children's book about it. Bradford put up inflated stats in garbage time blowout losses to the Cardinals and Redskins, followed by a meaningless Week 17 game against the third-worst defense in NFL history.

The Eagles may have themselves a future at quarterback with the addition of Carson Wentz. That's to be determined. But in 2016, a guy entering his seventh season in the NFL with 25 career wins will be the Eagles' quarterback. Make all the excuses you want for him, but he's "middle of the road" (MOTR), at best.

2) Ryan Mathews is the Eagles' running back

When Ryan Mathews got playing time last season, he was very good. He carried the ball 106 times for 539 yards (5.1 YPC) and 6 TDs, which made him the most productive runner on the team.

Unfortunately, he's never not hurt. Mathews has only played all 16 games once in his career, and even when he wasn't missing games, he was often playing with some kind of injury. From 2010-2015, Mathews appeared on the injury report a staggering 53 times. 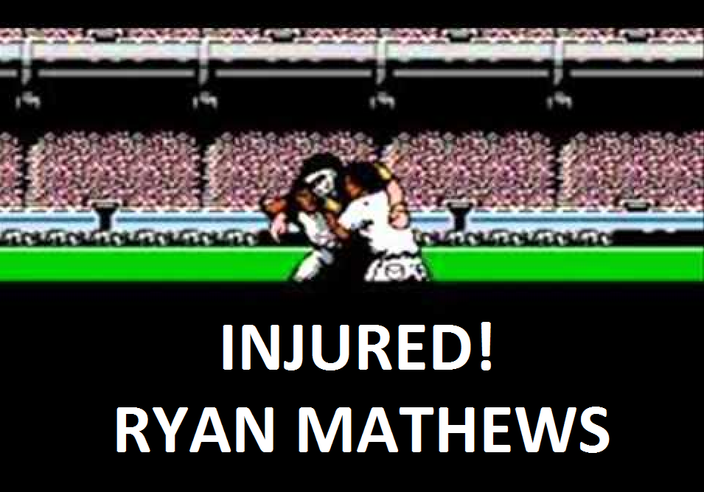 He's also not a great fit for the offense. Doug Pederson has said that he wants to be able to move his backs around to create mismatches for opposing defenses in the passing game. Unfortunately, Mathews can't catch.

This offseason, both Mathews and DeMarco Murray were on the trading block. The Eagles were going to trade one and keep the other. When they traded Murray, Mathews became the lead back, out of necessity. Behind him, they have Darren Sproles, who is more "offensive weapon" than traditional running back, rookie Wendell Smallwood, who still has to learn how to pass protect, and Kenjon Barner, who for some reason is beloved by many in the fan base despite never having done jack in the NFL since he was drafted three years ago.

The Eagles don't necessarily want Mathews long term, and yet they're kinda screwed in 2016 without him in the short term. In that sense, Mathews is kind of like the Sam Bradford of running backs.

I believe this video kind of says it all.

The Eagles led the league in drops last season, and a few of their receivers have struggled with them so far this offseason in OTAs and minicamp.

Jordan Matthews is a very good player who is likely to make a boatload of catches over a long NFL career. However, his coaches to this point in his career have not shown that they want him playing on the outside. Should his career continue along that path, he can be a premier slot receiver, which of course isn't the worst thing, but may be his ceiling.

After Matthews, it's ugly. Nelson Agholor had a disappointing rookie season, and now he's dealing with very serious legal issues stemming from accusations of sexual assault in a Philly strip club. Meanwhile, the Eagles signed a receiver the Giants no longer wanted in Rueben Randle, Josh Huff can't catch the football, and Chris Givens has been on a downward trajectory since a decent rookie season.

4) The offensive line remains a concern

After Chip Kelly essentially ignored the offensive line for the entirety of his tenure in Philly, the Eagles were left with an offensive line a season ago that lacked depth, and was the oldest in the NFL. We covered it at length in our "Eagles dumpster fire" series a year ago.

This offseason, the Eagles took a major step in the right direction by trying to fix the offensive line. They signed starting RG Brandon Brooks and versatile interior lineman Stefen Wisniewski in free agency, and then spent two of their first four draft picks on OT/OG/C Isaac Seumalo and OT Halapoulivaati Vaitai.

Unquestionably, the Eagles will head into the 2016 season in better shape along their offensive line than they did in 2015. Still, there are concerns:

Offensively, the Eagles have varying levels of concern at QB, RB, WR, and their OL. But their tight ends are good! So there's that.

For all of his faults, one of the great things Chip Kelly did in his tenure with the Eagles was bring back great special teams play. In 2014 and 2015, the Eagles scored 10 special teams touchdowns, an absolutely ridiculous total.

Kelly's fast-paced practices emphasized special teams. While I cannot confirm this for sure, there's almost no way there was another team in the NFL that practiced special teams drills more than the Eagles did when Kelly was the head coach.

Under Doug Pederson, the Eagles' practices are more instructive, and thus, slower. There are benefits and drawbacks to that approach, and one of the drawbacks is that the Eagles are paying far less attention to special teams in practice these days.

The Eagles still have standout special teams players like Sproles, Chris Maragos, Bryan Braman, and Donnie Jones, but it's hard to imagine them maintaining the level of success they had under Kelly. Special teams coach Dave Fipp will have to make the most of his limited time coaching up his units. For no reason whatsoever, here's Fipp if his eyes rapidly changed colors.

7) Lack of depth at key spots

#JimmyConfession: You know how we writers like to do 53-man roster projections in freaking May? I can't speak for other writers, but I do them because they're easy and they do well traffic-wise. They're good posts to do when you can't think of other stuff to write, but they're nearly useless until you start to get deep into training camp.

The one thing they are good for this early in the offseason process is getting a good feel for how deep the team is. If you have 56 or 57 players you'd like to keep on the roster, but making those final three or four cuts is difficult, there's a good chance the team is deep.

Conversely, if you can quickly pencil in 47 or 48 guys who you definitely want and then you're picking the final five or six guys just because you have to, then your depth probably isn't very good. In doing my 53-man roster projection so far this offseason, picking those final five guys was like being a 1980's Wheel of Fortune contestant picking crappy prizes after solving a puzzle.

We already mentioned the Eagles' lack of depth at running back and wide receiver, but they also have significant depth concerns at defensive tackle, linebacker, and safety.

8) The Eagles hate possessing the football

Over the last five years, the Eagles have turned the ball over 161 times, which is by far the most in the NFL:

Over that span, they have more than double the number of turnovers as the Patriots. Both Andy Reid and Chip Kelly were offenders of terrible ball security. Can Doug Pederson turn that around?

9) The Eagles have a lot of guys at corner, but no studs

Leodis McKelvin played his best ball under Jim Schwartz in 2014, but the rest of his career has been underwhelming for a former 11th overall draft pick. It appears he'll be the "No. 1 corner" for the Eagles this season. Meanwhile, Eric Rowe played well as a rookie last season, best has yet to stand out so far this offseason and has mostly been running with the second team defense.

Otherwise, there's Nolan Carroll, who was a decent starter a year ago, Ron Brooks, a vet with three career starts, and a handful of rookies and second-year players the Eagles hope will step up.

While it could certainly be worse, the Eagles CB situation is not ideal.

10) Doug Pederson himself is a concern

When the Eagles were trying to hire a new head coach, they wanted to hire Ben McAdoo, who took the Giants' head job instead. They even had a gift basket with Tastykakes and all kinds of other Philly-themed stuff ready and waiting for McAdoo on the second floor of the NovaCare Complex, like this:

1 lucky player will be welcomed to Philadelphia tomorrow with a basket of brotherly love 🎉 @cj_wentz @JaredGoff16 pic.twitter.com/ptnHnuKE5T

Just because Pederson wasn't the Eagles' first choice doesn't mean he won't be successful. But like any neophyte coach, Pederson has a lot to prove.