This week, all week long, we're taking a brutal look at each of the teams in the NFC East, in detail. The first target was the reigning division champion one-and-done Dallas Cowboys. On Tuesday we tackled the similarly one-and-done New York Giants. Today we'll have an easy target in the Washington Redskins.

To note, we will not be talking about the positives of any of the Eagles' NFC East rivals, because, well, that's no fun. This will be 100 percent vitriolic. And yes, we'll torch the Eagles at the end of the series as well.

1) Good God, these morons can't get out of their own way

After a 3-13 season in 2013 and a 4-12 season in 2014, the Redskins won the division in 2015, and were at least in the hunt for a playoff spot until the final week of the 2016 season. While certainly far from a Super Bowl contender, at least the Redskins were moving in the right direction.

And then... in typical Redskins front office fashion, they just couldn't help but have some absurd power struggle between team president Bruce Allen and GM Scot McCloughan, which ultimately led to the firing of McCloughan on the first day of free agency.

According to former player Michael Robinson, who remains friends with McCloughan, McCloughan said that he was called into Allen's office, where Allen said that nobody liked him, via Michael Phillips of Richmond.com.

"He knew the players loved him, and he started feeling the hate from Bruce Allen right around, well, he’s been feeling it, but when they didn’t let him speak (to reporters) at the Senior Bowl, he said to him that was his last straw, and he knew that he was on his way out," Robinson said on McElroy's show. "He said it was after a draft meeting, after the combine, Bruce called him up to his office and was just like, ‘Nobody likes you in this building. Nobody wants you here.’ And Scot was like, 'Well, I guess I’m out of here.'"

That kind of reminds me of the Cantina scene in Star Wars where the guy with the weird nose and his alien-looking friend tell Luke that they don't like him.

Anyway, the Redskins eventually decided not to name a new GM, instead hiring Doug Williams to some other non-GM title, which essentially means that Allen is very much still in charge, not that he wouldn't be even if they hired an actual GM.

We'll see if the front office turmoil carries over onto the field.

Over the last two seasons, the Redskins have played just 10 teams that ended up with winning records. Here's how those games went, in chronological order:

They've gone 2-8 against those teams, lost five games by at least two touchdowns, and were -96 in point differential.

Kirk Cousins has 19 career wins. Here they are in chronological order:

Yes, the combined winning percentage of the teams Cousins has beaten over his career is 0.397.

3) The Redskins are out-leveraged by their quarterback

Cousins is a "good-not-great" quarterback, with a whole lot of leverage. In 2015, he played under the franchise tag at a hair under $20 million. The Redskins tagged Cousins again this offseason, and if they cannot sign him to a long-term deal by July 17 (the deadline to sign franchise tagged players to long-term deals), he'll play under the tag again, this time at a hair under $24 million.

The Redskins can tag Cousins again next offseason, but if they do, the numbers get way out of hand, if they aren't already, as he'll make somewhere in the vicinity of $34-$35 million.

Cousins reportedly asked to be traded, which he later denied. Denial or not, it would certainly be understandable for a quarterback not wanting to play for a team with the type of clown show ownership and front office that the Redskins have.

From Cousins' perspective, he can simply play out the 2017 season at $24 million and then hand pick his next team in free agency in 2018. At that time, being an extraordinarily rare quality quarterback on the open market, he'll make a boatload of money on a long-term deal, possibly becoming the highest-paid player in the NFL assuming his play doesn't completely fall off a cliff in 2017.

But the key date here, again, is July 17. If the Redskins don't sign Cousins to a long-term deal by then, they have to wait until after the season to do so, and by then it'll probably be too late. If the Redskins have any hopes of getting a deal done, they're likely going to have to wildly overpay, as Cousins can just sit back and say, "F*** you, pay me."

If Cousins is gone next season, let's recall the 16 quarterbacks who have started for the Redskins since Snyder bought the team. They'll be right back to trying to find a new one.

Now, this doesn't necessarily have anything to do with the Redskins' success or lack thereof in 2017, that is unless Cousins' head is on his contract situation and where he'll be in 2018.

Whatever the case, obviously we can't publish a long dumpster fire feature without noting this very dumpster fiery situation.

Pryor's worth on the open market was surprisingly thin, as he ended up signing a low one-year, $6 million deal with incentives that could bring it to $8 million. Pryor thought he was a $12-$15 million per year player. The NFL thought differently. As for Doctson, his rookie year was a waste, mostly due to injury, but he's proven nothing so far in the NFL, as opposed to Jackson and Garcon.

While the Redskins' decision not to overpay for two aging players in Jackson or Garcon may have been logically sound in the long term, there's little question in my view that their production in 2016 won't be matched by Pryor and Doctson in 2017. And even beyond tangible production, I say with no hyperbole whatsoever that Jackson is probably among the three best deep threats in the history of the NFL. The opportunities that he opens up underneath because of his ability to stretch the field cannot be understated. 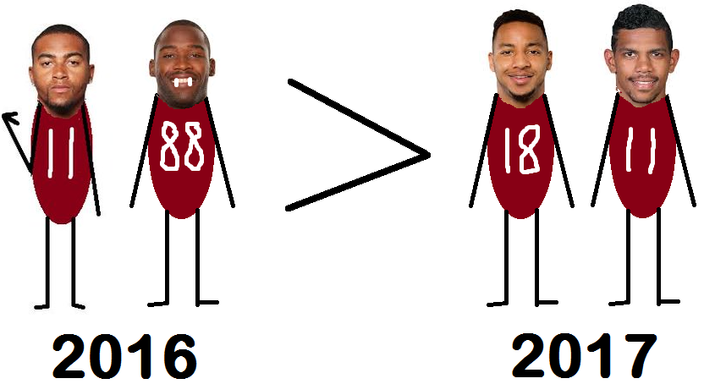 Star tight end Jordan Reed has suffered SIX concussions in his football career, and he has not played all 16 games in any season of his career, missing 18 games in four years in the pros.

The question probably shouldn't even be about Reed's availability in any one season. It should be whether Reed should still be playing, at all.

In my view, the Redskins' offensive line may be better than the Cowboys' offensive line, mainly because they have a good unit across the board, but are significantly stronger at tackle. As a run blocking unit, they're excellent.

Unfortunately, the Redskins don't have a running back who can capitalize the way that they should. The Redskins were somehow 21st in rushing a season ago despite an offensive line that consistently opened up holes in the run game. Robert Kelley, Chris Thompson, and Matt Butterfingers Jones all have some appealing traits in their skill sets, but are all JAGs. With a really good back, they could be deadly, but they don't, so they're not.

7) The Redskins can't stop the run

Their defensive rushing numbers on the season:

8) And they can't stop the pass either

Their defensive passing numbers on the season:

The Redskins did a little reshuffling, adding safety D.J. Swearinger in free agency, and having a defense-heavy draft, but this remains a unit with more than its share of holes.

9) The corners (not named Josh Norman) were particularly bad

Bashaud Breeland struggled in coverage most of the season, and was absolutely dreadful Week 1 against the Steelers. Slot corner Kendall Fuller was even worse.

As for Norman, he's a good player, but not worth anywhere near the five-year, $75 million deal he got a year ago.

It was thought that the Redskins had solved their cornerback issues heading into the 2016 season. Nope.

10) And as always, let me check to see if Dan Snyder is still the owner.