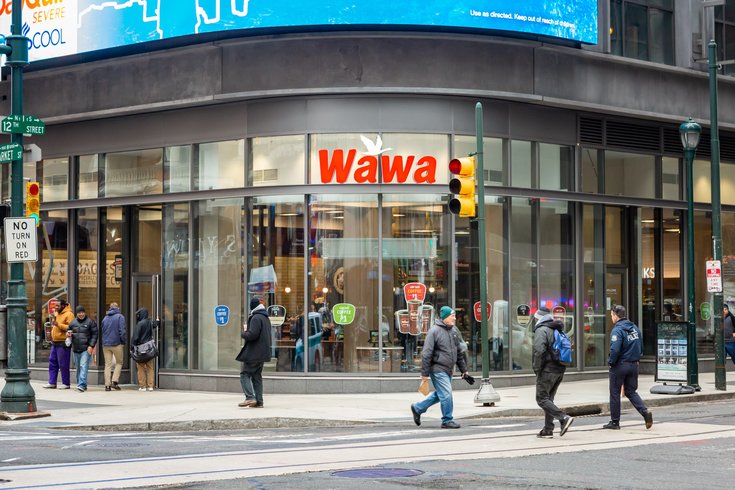 To begin, let me first say that I love Wawa. Over the last 20 years, I have lived all over the state of New Jersey, sometimes in Wawa-plentiful locations, and sometimes, well, in a wasteland of 7-11's and QuickCheks.

I can remember being irrationally excited when I lived way up in North Jersey, and a new Wawa was opening in Parsippany, in a location that was a short detour off of I-280 on my way to Philly to cover the Eagles. Hell, way back in the day when I was engaged, at my wedding I wanted to have Wawa kiosks with hoagies and whatnot during the cocktail hour. (That idea was shut down.)

So to be clear, Wawa does a lot of great things. They have decent enough food on the run, gas, free air for your tires, free ATM, etc etc. There's a reason they're so successful. As such, all of what is said below is out of love, raising awareness of how we can be better to each other when shopping at Wawa, and how Wawa can be even better to us.

1) Don't be a line-jumping scumbag

If you’re waiting in line, and a new register opens up, don’t be that clown at the end of the original line who quickly hustles to the front of the newly opened line.

The correct etiquette is to give everyone in front of you a solid “three Mississippi” count, and not a fast Mississippi count like you did when you were 10 and you were the pass rusher while playing two-hand touch football. In fact, you know what? Just to be sure, make it four Mississippi's. Once you make your four-Mississippi count, you are free to move to the newly opened register if the patrons in front of you have passed on that opportunity.

Don’t stand there and chit-chat with the cashier after your transaction is complete when there are five people in line behind you. The 22-year old burnout cashier with the stretched-out earlobe rings doesn't care about your granddaughter's gymnastics competition, and even if he did, you can simply move your ass to the side so that the line can move forward.

Your turn in line at Wawa isn't, like, "your moment," like you just won an Oscar or something, where the world stops while you pontificate about nonsense. MOVE!

3) Can we stop paying with change already?

Don’t pay with change. Ever. Nobody wants to wait while you dig through your purse for a nickel and two pennies. Use a credit card or debit card. Credit card transactions take like 5-10 seconds these days, and you're not even signing anything. Plus, you know, the more you use your card, the more you can rack up airline and/or hotel miles.

If you're old school and you like using cash, that’s fine. But just pay with dollars, please. Wawa has the automated change return thing. Just grab your change, throw it in a jar, and convert it into real money when the jar is full. I couldn’t possibly imagine carrying change around with me, much less needlessly caring enough to use it to pay for something.

Also, getting back to the credit card point, everyone has the chip reader now. Like, everyone. Don't ask, "Is this a chip thingy?" Yes, it's a chip thingy. Just put your card into it when you're told.

4) The hand blowers in the bathroom have to go

This goes for everywhere, not just Wawa. It's enough already. Just have paper towels. They actually dry your hands, and I can use them to open the bathroom door on the way out to guard against the gross trucker that didn’t wash his hands after he pooped.

Hand blowers don’t work, and really all they do is circulate pee and poo molecules around the bathroom. And let’s not pretend that you have the hand blowers because they're better for “the environment.” You’re doing it because it’s cheaper. Look, I’m all for the environment, and drastic changes on a much larger scale are way overdue, but hand blowers aren't saving the world. So just stop it with them already.

Personally, at Wawa, if I absolutely have to use the bathroom, I don’t even bother using the hand blower after I wash my hands, by the way. I just go back out into the store and use the napkins that are provided for sandwiches.

5) Your urine belongs in the urinal, not on the floor

Again, this goes for everywhere, but I feel like it's rampant in Wawa, likely because of the high volume of people using the bathroom.

Once the first pee drippings hit the floor in front of the urinal, it sets in motion an ever-expanding pee cloud radius that grows and grows as people understandably stand further and further away from the urinal, since they don’t want to stand in pee. Here's some time-lapse photography of the pee cloud phenomenon:

Don’t be the first guy to start an irreversible pee cloud.

This practice tends to happen more at the Jersey shore than it does in-and-around Philly, and it's infuriating. Wawa hoagies are great for food on the go. If you're going to order a bunch of hoagies for some kind of day-drinking event, or the beach, hey that's great, but do it at some Italian-sounding place like "Giuseppe's" or "Lou's" or something.

The Wawa hoagie-makers' time is precious to the customer, and your bullshit 15-hoagie order is now causing a traffic jam of people waiting for their normal order, like a Turkey Gobbler or something.

This is what happens when you’re that guy. pic.twitter.com/TcKSS0o2fv

At a minimum, at least call ahead and make your order. And yes, they take call-ahead orders.

I'm all for saving time when possible, but it should not come at the expense of wasting someone else's. If you pull in for gas and leave your car at the pump while you go in for snackies, that is only an acceptable practice in one of the following two conditions:

DO NOT attempt to execute a gas-and-food multitasking operation when the pumps are more then 75 percent full. It is wholly unacceptable for your car to still be sitting at the pump for any longer than 15 seconds after it’s done refueling if there are other drivers looking for pumps.

8) Can I actually get some meat on my hoagie?

In recent years, Wawa has cut back on the meat they put on your hoagie. It's a glaring problem when you order a hoagie without lettuce, tomatoes, and onions, and therefore can't be stuffed with all that filler. For example:

And if you look at the timestamp in that tweet, it was the day after Christmas! Like, how can you make that hoagie and think, "Yes, this is acceptable."

According to Billy Penn, Wawa is bringing in more than $10 billion per year. Can I get a hoagie in which more than half my bites include some meatball? Thanks.

9) Stop with the super-complicated cigarette orders

Do your lungs really have such a refined palate that one cigarette brand is that much different than the rest?

Cashier: (Looks at the rack, then the drawer under the register, then the rack again)... "I don't think we have that."

Patron: "Can you check in the back, please?"

Cashier: "Everything we have is behind the register here."

10) Think of everything as "holding the door" for someone

Oddly, everyone seems willing to hold doors, and say thank you when someone holds the door for them, psychopaths as they may be otherwise.

And yet, at the same time, the same seemingly nice guy who just held the door for you will order 15 hoagies at the kiosk, pee all over the floor, not wash his hands, jump a line even though he's going to be waiting for his hoagies anyway, order a pack of "Marlboro Robust Extra-Mediums, Unfiltered," all while his car is occupying pump No. 4 for the next 20 minutes.

The next time you go to Wawa, you know the guy who held the door for an extra two seconds? Be that guy for your entire visit. Thank you for listening.