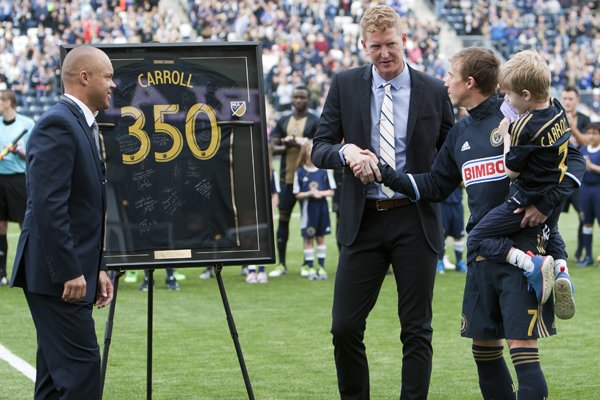 Part one of "34 over 34" did a lot better than I thought it would, maybe because I underrated soccer fans' penchant for lists and/or clickbait.

The first installment of our debut geriatric rankings featured the likes of Blas Perez, Victor Bernardez, and Jack Jewsbury. Part two includes the oldest of the old, the 36 and 37 year olds who are still playing at the highest level while the rest of us sit on the couch and watch NFL RedZone.

I didn't include Carlos Ruiz because he hasn't played a game for Dallas this season. You probably will not read this disclaimer and instead bash me on Major League Soccer Reddit.

The New York City veteran made the jump from right back to defensive midfield this season, filling a gaping hole at the number six spot.

His presence there has helped NYC in the passing and possession game, though the fragile city rearguard has still shipped way too many goals this year.

MLS Cup winner at age 34, Borchers started 21 of 22 games for the Timbers this season before rupturing his Achilles tendon.

That might do it for the MLS veteran, who has played more than 300 games for three different clubs and won two titles in the process. He's been a consummate pro for the entirety of his career.

Is there an award for most patient Timber? @natborchers on crutches keeps getting stopped for handshakes & pics on his way to the front

Yeah, Jones hasn't played in awhile, but he's still got it.

I cover the Philadelphia Union for a living, so call me biased, but Carroll has continually shown the middle finger to father time.

Carroll has deputized brilliantly for Maurice Edu in 2016, splitting time with Warren Creavalle in the Union's defensive midfield. He's played alongside four different players at the number eight and  looks set to eclipse 2,000 minutes for the tenth time in his MLS career. Carroll started his 343rd game last Saturday.

The 36-year-old isn't putting up the numbers that he used to, but I'd still take him on my team.

Now in his tenth season with Real Salt Lake, Morales has contributed 49 goals and 81 assists in 18,982 minutes.

Eight assists and eight goals this season, four of which have come from the penalty spot.

Kaka makes a base salary of $6.6 million, which is 251 times what I made as an overnight television producer in Augusta, Georgia.

Admit it, you thought he was going to suck this season.

Only three Galaxy players had logged more minutes than Cole in 2016. He's made the cross-country trips and played on turf fields when other players have avoided those situations.

In a league that still struggles to produce decent left backs, Cole has come over and put himself near the top of that list, even at age 34.

I wasn't that excited by his return, but he's Landon.

He looked like he was cooked at the start of the season, but Gerrard has quietly put together a nice season.

If it wasn't for the nagging injuries, he'd probably be the league's current assist leader.

He was a defensive turnstile last season and really looked like a bad choice for MLS.

This year, he's been fit and healthy and has a more defined role in the New York City midfield. At age 37, he's bagged one goal and ten assists while starting 28 games and logging more than 2,400 minutes.

He hasn't replicated his late 2015 form, but Drogba still has a very respectable 10 goals and five assists in 1,540 minutes.

I'd like to see him alongside Matteo Mancosu in some sort of 4-4-2.

Like Morales, he isn't adding the goals and assists that he used to. Beckerman was usually good for two to three goals and three to five assists.

Still, he's going strong at age 34 and is still a shoe-in starter for RSL. Nobody outside of Brian Carroll has better positioning and smarts at the number six.

Would you put him on your team ahead of Andre Blake or Bill Hamid?

Rimando isn't the pure shot-stopper that those younger guys are, but his distribution, experience, and veteran savvy has kept him going for the better part of 17 years now. Rimando has the potential to finish his career as the best goalkeeper in MLS history.

I probably ranked him too high, since his 2016 production doesn't match his previous years with LA.

But I don't care, because he's still the best designated player in league history.

Thirty-eight years old with 12 goals and one assist.

Just like you, I thought the Lampard situation in 2015 was a total joke. All of us were proven wrong.

I just hope he's healthy for the stretch run and the MLS playoffs, because it would be a shame to see him limp to the finish line after a strong season.

He came to America, embraced the county, embraced New York City, and made an effort to learn English.

I can't think of another DP who has shown as much commitment and heart as Villa has. He's been a true professional in every sense of the word.