5 beer cocktails to stir up this spring

Your favorite brews, with a twist 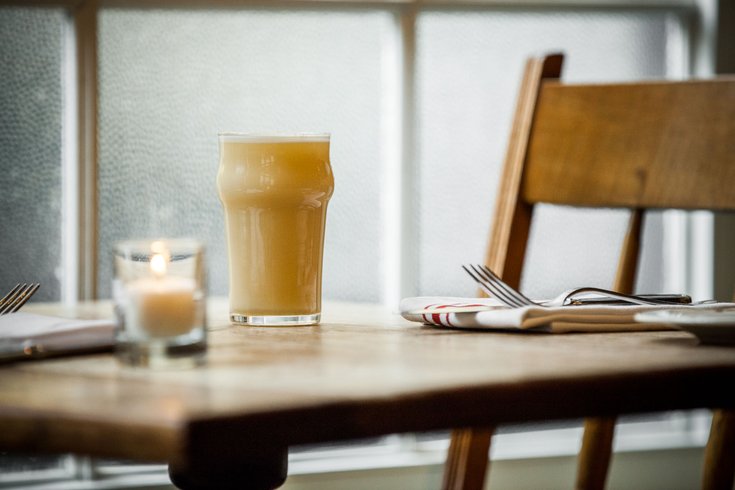 The Summer Flip cocktail, a blond version of the Stout Beer Flip, at The Dandelion.

In reality, though, beer makes a sophisticated addition to any bartender's arsenal. With its variety of flavors, myriad colors and low alcohol content compared to other spirits, it makes for a versatile ingredient. Rather than just adding volume or carbonation, the right style of beer can complement a variety of liquors or simply mingle with champagne or cider for a unique taste.

In fact, beer cocktails have a long and storied history. Purl, a beer cocktail made popular in 19th century England and known to pop up in Dickens novels, is an ale infused with wormwood or other herbs. The Michelada, a popular Mexican beverage that combines beer, lime juice and various spices or sauces, is fabled to have been created during the Mexican Revolution.

These oft-maligned drinks only go wrong when the proportions are skewed, just like any cocktail would if the mixture wasn't just so. The tendency to use it as a neutral mixer - like soda or tonic - is where many recipes go awry. When considered for its flavor - whether it be malty, hoppy, crisp, smoky, etc. - its appearance, its ingredients and its carbonation level, beer can be not only a vehicle but an asset for a mixed beverage.

Luckily, plenty of bars and restaurants in Philadelphia are doing it right. Check out the five examples listed below to get a feel for what a beer cocktail should really taste like. 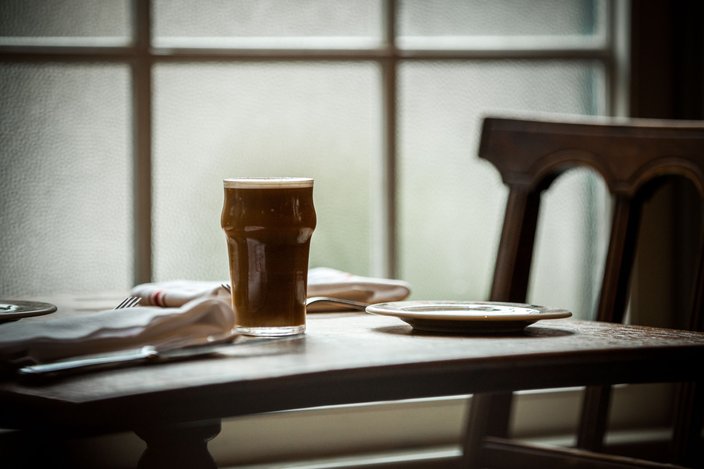 Thom Carroll/PhillyVoice
It isn't surprising that the beer cocktail coming out of Stephen Starr's English-themed restaurant is made with a U.K. import. Featuring Wells & Young's Double Chocolate Stout, Dandelion's Stout Beer Flip ($11) mixes orange marmalade, Bulleit Bourbon and chocolate bitters - oh, plus a whole egg. The egg (a defining element of the flip) produces a very creamy, foamy texture, which goes well with the silky milk stout, itself a dark, decadent delight. A treat in its own right, the flip meets its match with a rich, hearty food pairing.
A blond edition of the flip (above), with white rum and no bitters, will be available this spring and summer.
The Dandelion. 124 S. 18th St. (215) 558-2500 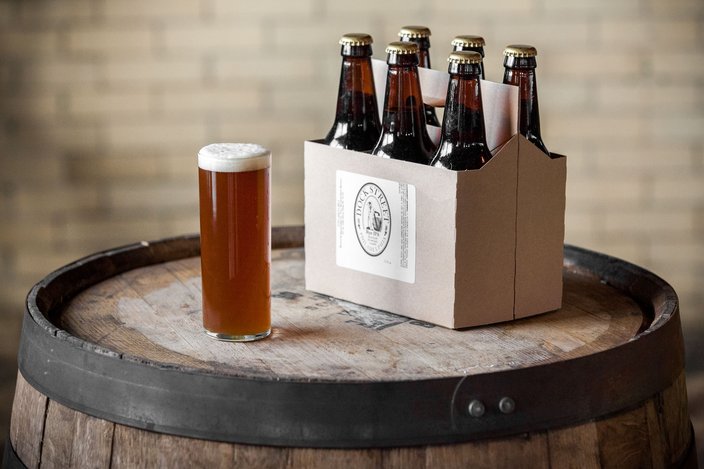 Thom Carroll/PhillyVoice
Don't be fooled by its name: this Rye Shandy ($5.75) isn't some lemonade-and-Corona combo you make during a summer BBQ on a whim. Combining Dock Street Brewery's own Rye IPA - a very hoppy brew with a good spice to it - with ginger beer, this mix is a true shandy. It's just as refreshing as more lemon soda versions, but it highlights the beer's flavor rather than covering it up. The addition of rye whiskey complements not only the beer's use of rye grain but also adds an extra layer of flavor. Pair it with a flavor-packed Dock Street pizza, like the Fig Jam or Flammenkuche varieties.
Dock Street Brewery. 701 S. 50th St. (215) 726-2337 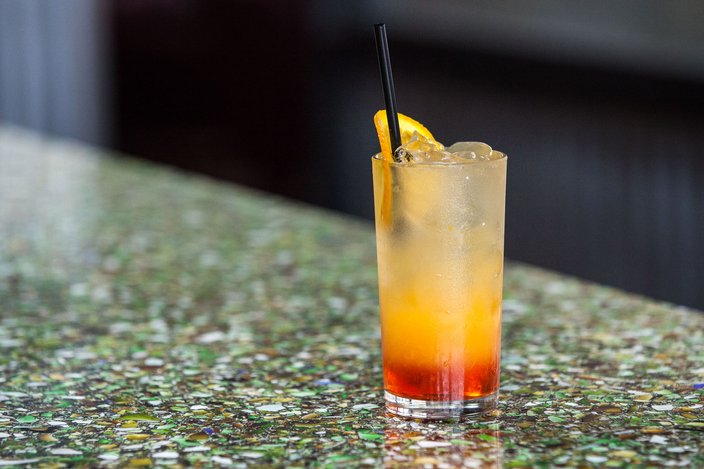 Thom Carroll/PhillyVoice
Those well-versed in Italian might notice this drink translates to "Four Crazy." That's because Quattro Pazzo ($8) is made with four ingredients: prosecco, pilsner beer (usually Peroni), plain ol' orange juice and Aperol, an Italian apertif. Layered in the glass, the four compatriots create quite the good-looking drink. Unfortunately, it's really best to mix it all up with your straw before taking a sip, unless you'd like a big taste of that bitter orange Aperol. Throw the orange garnish in for even more citrus flavor, and you'll turn the whole thing into a "beermosa"-like cocktail.
Alla Spina. 1410 Mt. Vernon St. (215) 600-0017 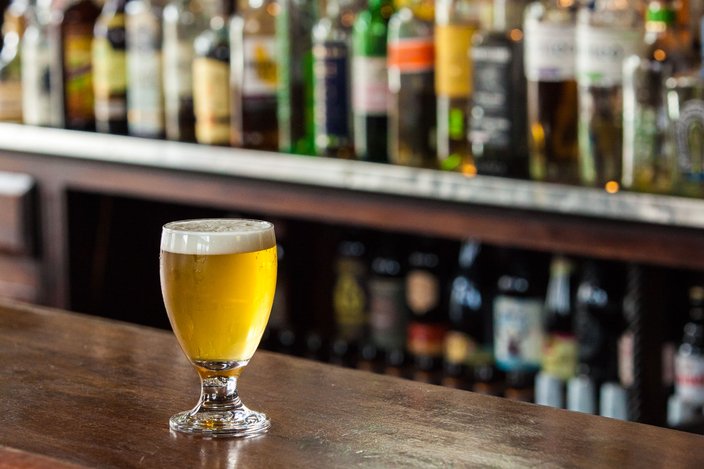 Thom Carroll/PhillyVoice.com
For those wary of mixing their precious brew with liquor, London Grill's 'Gaarden Party ($6) is the more beer-friendly of this bunch. Mixed simply with strawberry vodka and Cointreau, the drink allows the wheat ale base to shine, especially when it's Ommegang Witte, a classic Belgian white ale. Witte is actually brewed with orange peel, making the orange-flavored Cointreau triple sec a subtle yet complementary match. The fruit flavor of the vodka doesn't weigh the unfussy drink down, making it a refreshing addition to a light lunch on a warm day. It's also easy to make, a boon for diners at this busy neighborhood bar.
London Grill. 2301-2303 Fairmount Ave. (215) 978-4545 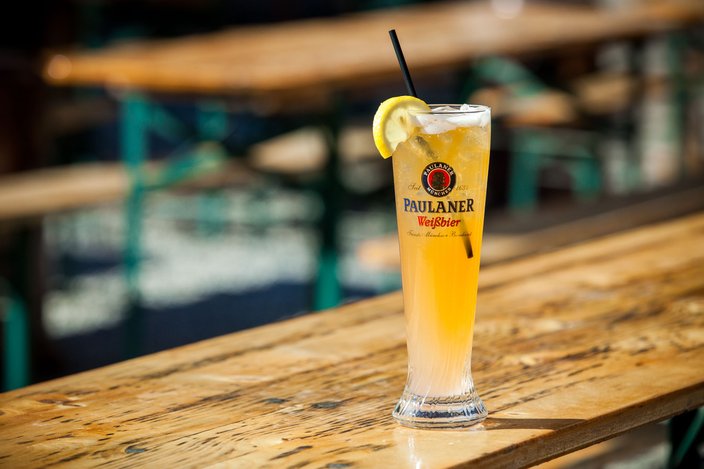 Thom Carroll/PhillyVoice
Frankford Hall may get flack for attracting tourists, but it's hard to deny the allure of a cold beer, a picnic table and a game of Jenga on a nice spring day. As a beer cocktail, the Respect Your Elder ($10) is like the spirit of Frankford Hall in a glass. Made with Paulaner hefeweizen, grapefruit and lemon juices, Bombay gin and St. Elder elderflower liqueur, the unfiltered wheat beer combines with the citrus juices and floral notes for a serious tropical feel. Elderflower's pineapple and lychee flavoring pairs well with gin, meaning Respect Your Elder packs quite a punch.
Frankford Hall. 1210 Frankford Ave. (215) 634-3338