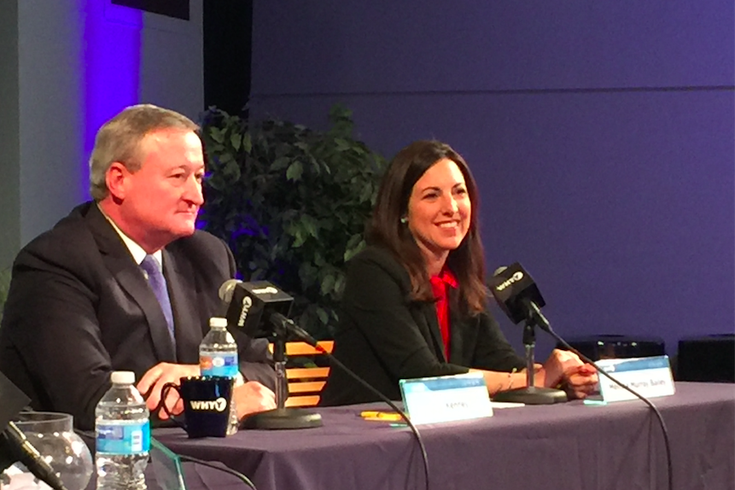 Mayoral candidates Jim Kenney (D) and Melissa Murray Bailey (R) met up at WHYY's studios on Independence Mall on Monday night for the second of four debates before voters go to the polls on Nov. 3.
The hour-long "Leading Questions" debate – sponsored by WHYY/NewsWorks, the Committee of Seventy, Young Involved Philadelphians, NAACP Millennials and others – featured questions about attracting businesses to the city, stop-and-frisk, education, gentrification, working with City Council, lessons learned from the Papal visit and more.
And, real talk: If you'd paid attention to the race since the primary season, you've heard many of the exchanges before.
While there were no heated showdowns (perhaps those will come in the Oct. 19 or 23 debates, which will also exclude a trio of third-party candidates), a few moments of note emerged. Such as:
1. During the "fishbowl" round of questioning, each selected a query at random. The question Murray drew: "What is your personal opinion of Wing Bowl?" After noting that this was not a question that she's considered before, she noted, "I think it's OK."
2. Each candidate was asked for a specific instance of something for which they'd accept being held accountable. Bailey spoke about boosting literacy rates among Philadelphia youths, noting that those levels  vary from "eight to 100 percent" at schools citywide. Her quote: "It will be 100 percent by the end of my first term."
3. Continuing with the education-issue approach, Bailey noted that it's disgraceful that thousands of textbooks were found in the basement at the school district headquarters rather than, y'know, in students' hands. When the possibility that they were outdated texts was broached, she said, "I don't think algebra has changed in 20 years, American history, some of the classics we read. When kids don't have anything, it's better to provide [older textbooks] to them."
4. Asked about job-creation strategies, both said it would be a high priority in their respective administrations. Bailey said that "we need to connect people with the jobs," and that "call centers can employ thousands of people" without diplomas or degrees. Kenney spoke about meeting with many business leaders interested in setting up shop in Philadelphia. "At the end of every conversation, I ask 'what are you doing about diversity and what is your policy on [hiring ex-offenders]? What are you doing about those issues?' If they don't have a good answer, they can come back when they do."
5. Kenney said he would work to expand the Community Life Improvement Program (better known as CLIP) citywide.
6. In a discussion about the need for cleaner streets, Bailey recalled a recent time when her husband had to carry a mustard packet – he'd used the condiment for a pretzel – for six blocks before they found a trash can. And this was unacceptable.
7. In his closing arguments, Kenney spoke about being "an Irish-Catholic Mummer who was for gay rights before it was in vogue." That was representative of the stance that "my ability to do the right thing in the face of adversity is strong."
8. In her closing arguments, Bailey asked the crowd of roughly 200 attendees whether they heard "any surprising questions." It was a rhetorical-ish question, as she knew they didn't, because neither did she. "The whole point of what I was saying," she told PhillyVoice after the debate, "was that nothing can be a surprise because we've had these problems for decades. They're systemic. For us to think that doing the same things is going to produce different results is just ridiculous." Asked if the implication was boredom, she laughed and noted that, well, she has answered a lot of the same questions. (Though as someone who has covered the race for the bulk of the year, Monday was the first time I heard Wing Bowl enter the discussion. So, there's that.)