6ABC reporter responds to driver who allegedly yelled at her, 'This is America' 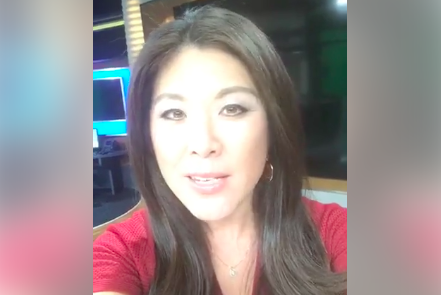 6ABC reporter Nydia Han took to Facebook Live to share an incident in Philadelphia Friday in which a driver allegedly yelled to her from the car, "This is America."

A driver picked the wrong pedestrian to allegedly aim what was perceived as a racially charged declaration this week.

Nydia Han, a consumer reporter and a Sunday morning co-anchor with 6ABC, posted an emotional response on Facebook Live to someone who allegedly yelled at her, "This is America."

In the video, which picked up nearly 150,000 views in just a few hours by Sunday afternoon, Han said she was walking along Locust Street and crossing 20th Street on Friday when the driver turned left from 20th onto Locust and nearly hit Han.

After missing Han by about "a half a foot," the journalist and the driver exchanged words over the incident before the driver pulled away and allegedly shouted the comment to Han out her window.

Han, who has Korean ancestry and is from the U.S., called the incident deeply disappointing and disturbing.

But she wove a deeper message into the four-minute video.

Han is an award-winning reporter who joined 6ABC's "Action News" in 2002 and has been around the business for more than 20 years, according to her bio. Her career and job assignments have taken her around the country, including her coverage of Hurricane Katrina and the Columbia shuttle disaster for Action News.

"I have seen America at its best and at its worst," she said. "I know my U.S. history. I can name every cabinet member. I can name every state capital. Can you? Yet you have the audacity and the ignorance to yell at me that 'This is America?' Are you kidding me? You see this face and you think this face belongs to an outsider or a foreigner?

"Did you think that this face would not stand up against you? Against racism? Against ignorance? Well, you were wrong."

But in the end, Han agreed with the statement.

She asked viewers on Facebook to pass along the message.